January 28th, 2014. We had one of our rare snowfalls. The temperatures were falling fairly fast when the small flakes of snow started to fall in the early afternoon. 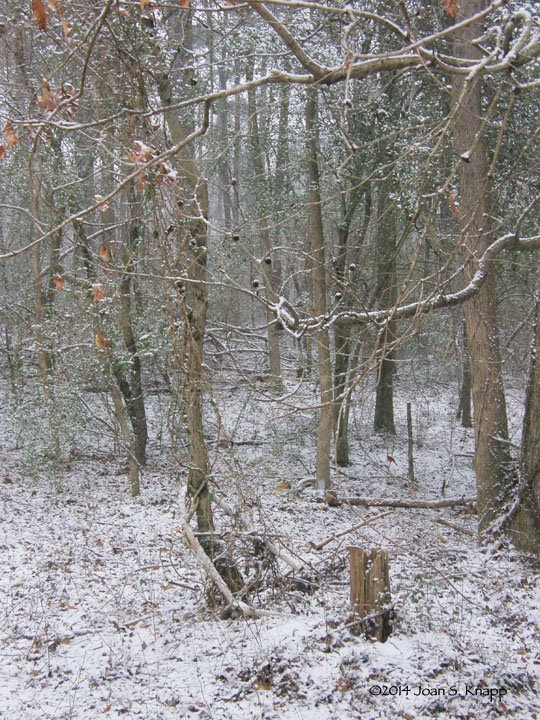 The snow began to accumulate fast and it stuck; we got about an inch of snow. 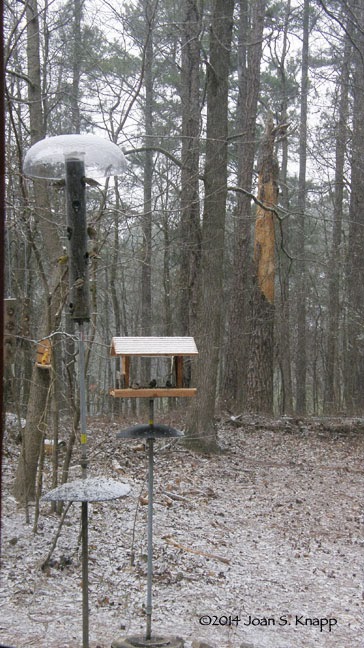 We were warm inside and could watch the birds gathering at the feeders. We have two cylinder feeders, one with sunflower seeds and the other with a mix of millet and other seeds. A platform feeder has both the millet mix and sunflower seeds. In addition we have two log feeders that have a mix of suet, peanut butter and seeds. These provided some great opportunities for photographs – even if some were a bit fuzzy. 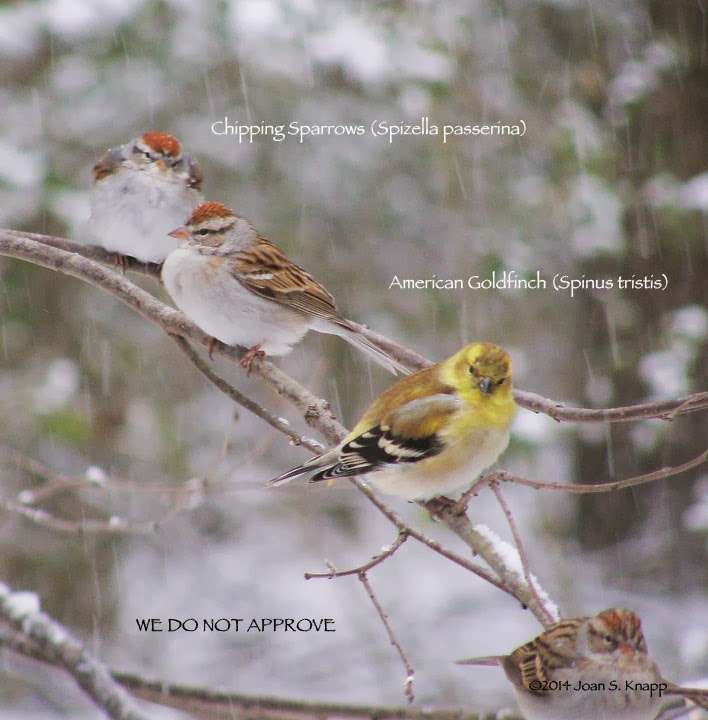 Chipping sparrows (Spizella passerina) and American Goldfinch (Spinus tristis) were huddled on a branch awaiting their turn at the feeders. 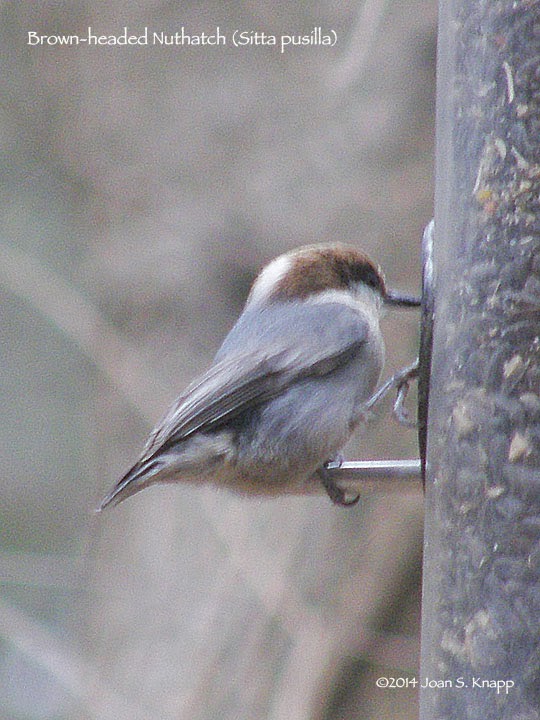 Brown-headed Nuthatch (Sitta pusilla). A couple of nuthatches have been regular visitors to this feeder this year. They will set and eat; this bird was taking seeds ‘to go.’ 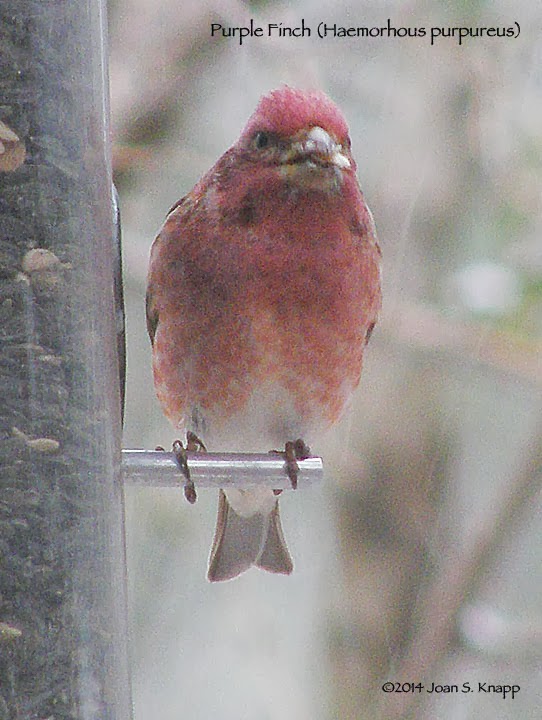 Purple finch (Haemorhous purpureus). We’ve only seen one this year; usually we see up to half a dozen at the sunflower seed feeder. 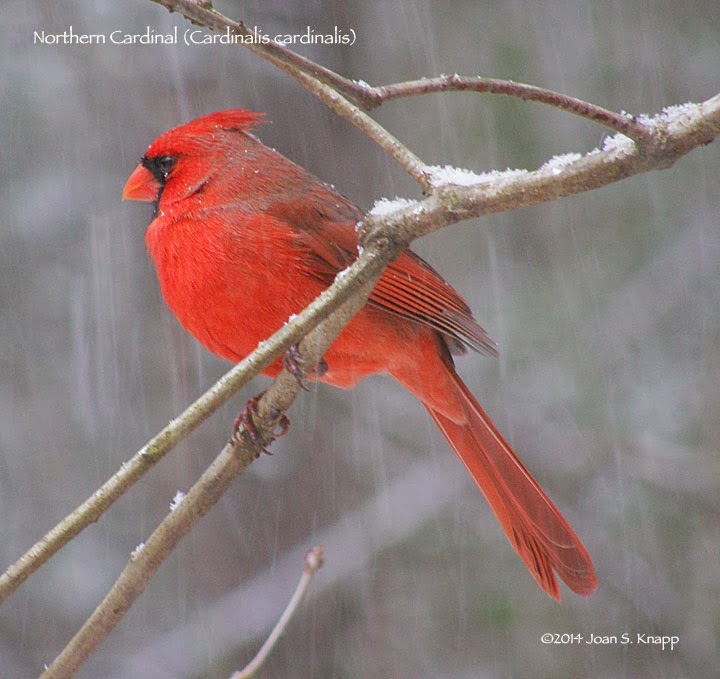 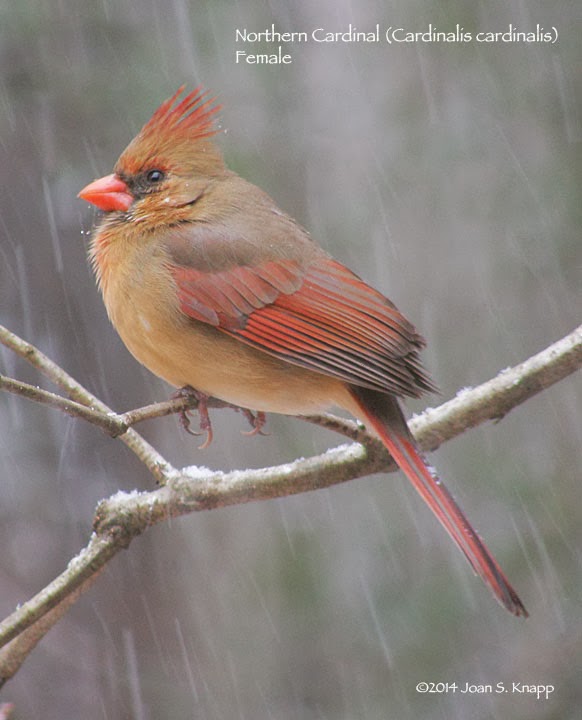 Cardinal (Cardinalis cardinalis). Numerous males and females are regular visitors. They are most comfortable feeding on the ground. These were perched in a tree by the window. 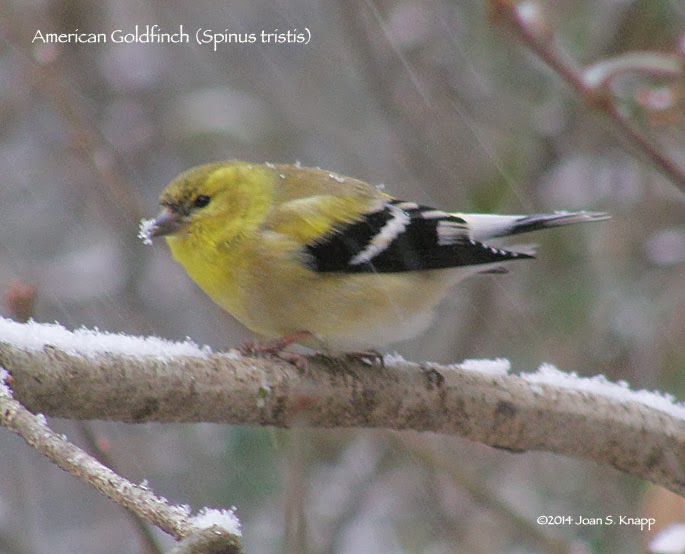 American Goldfinch (Spinus tristis). This goldfinch was fluffed up against the cold. 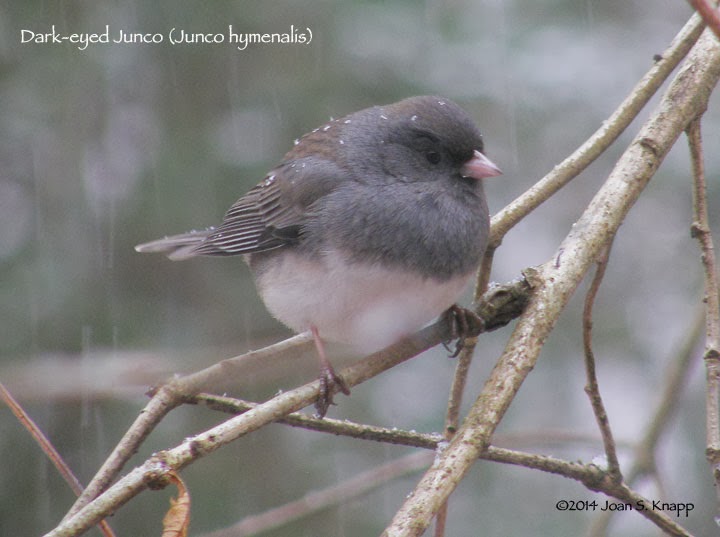 Dark-eyed Junco (Junco hymenalis). It’s unusual to see these perched in a tree. Usually they are foraging on the ground. 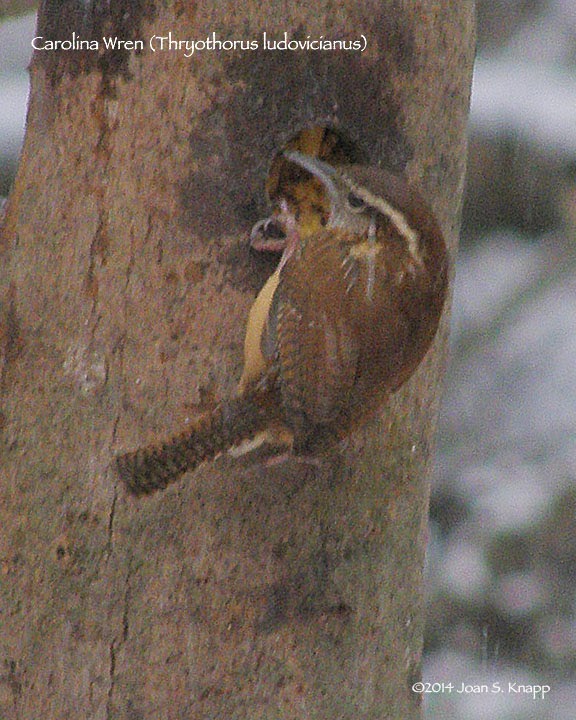 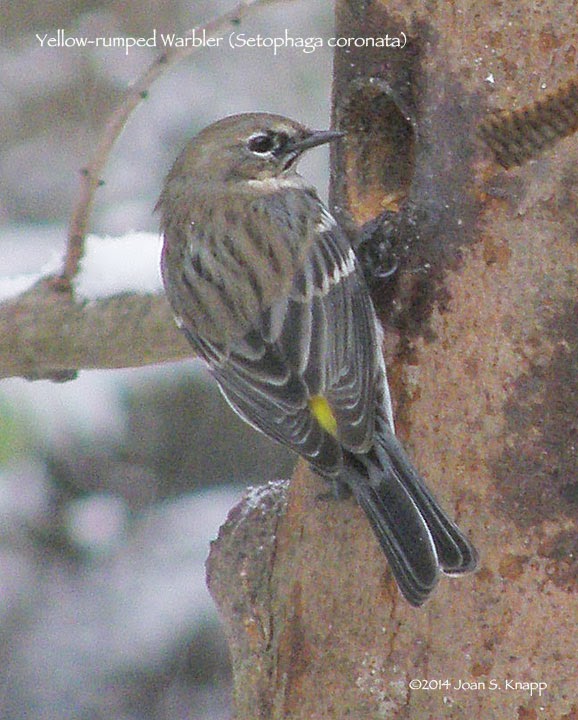 Yellow-rumped Warbler (Setophaga coronata). I was delighted to spot this little guy. I’ve only seen them in the field feeding on the sap dribbling from holes drilled in the trunk of a Sugar Maple (Acer saccharum)  tree by Yellow-bellied Sapsuckers (Sphyrapicus varius) 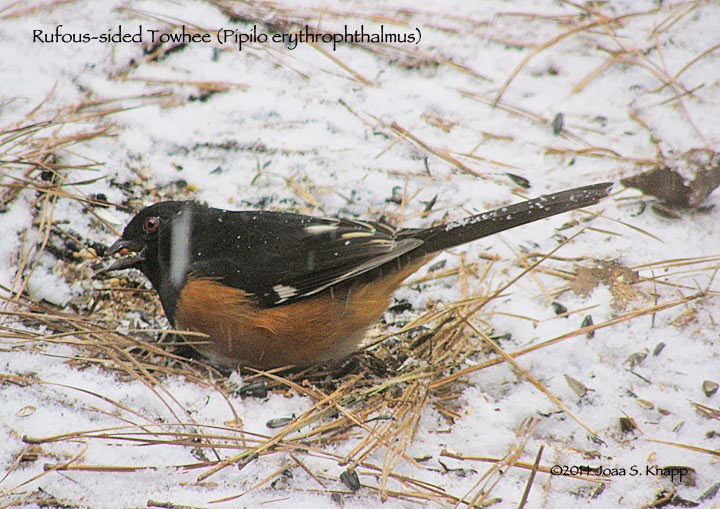 Rufous-sided or Eastern Towhee (Pipilo erythrophthalmus). We only see one or two of these – and farther from the house. This one was foraging only a few feet away. 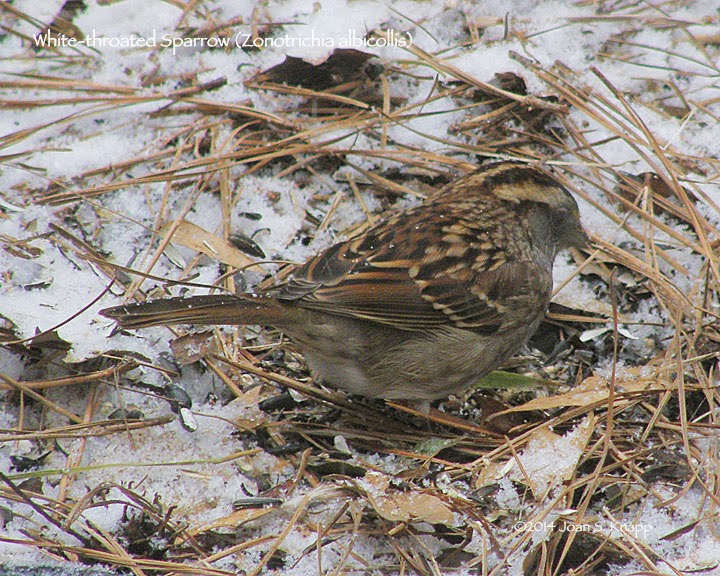 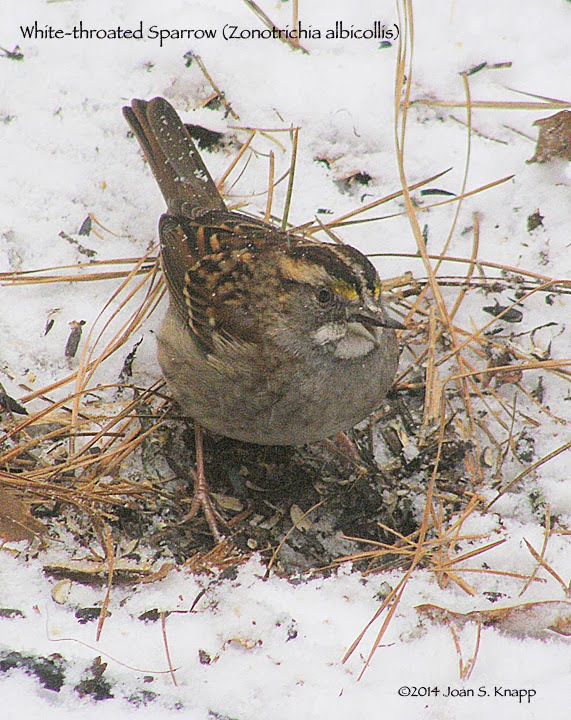 White-throated Sparrow (Zonotrichia albicollis). I was excited to get a closer look at these and finally identify them. I’d seen them at a distance, foraging near the log feeders some distance from the house. I could see the stripes on the head but didn’t get a good look at their throats until now. There were at least half a dozen foraging on the ground.