July 2nd – 9th, 2016. A few years ago, we had to relocate a watergarden barrel during some renovations. I decided to move it back to its original location just recently.
The barrel had a couple of inches of wet leaf litter in the bottom. I tipped the leaf litter out onto the ground and moved the container to its new location.

When I went back to get its bricks and plant container, I realized that a frog – a Green Frog (Lithobates clamitans) - was sitting in the leaf litter near my foot. I picked it up and placed it back into the barrel. Some duckweed, re=introduced into the container, soon spread over the water’s surface to provide cover. 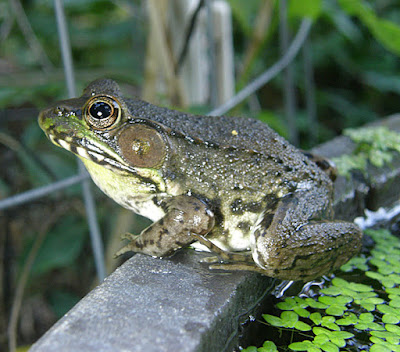 sit on the side of the barrel to hunt for insects. Its tympanum, much larger than its eye, indicates that it is a male. 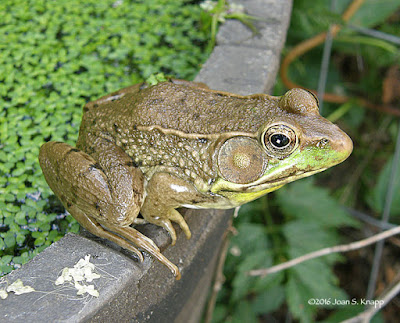 Recently, he has also begun to hunt at various times during the day.

When he’s not sitting on the side of the barrel, he may often be found… 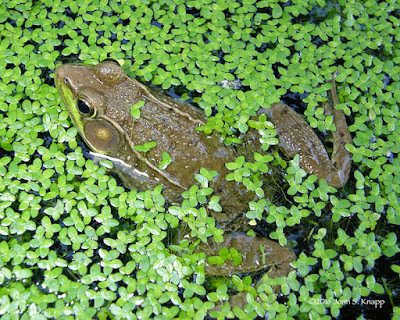 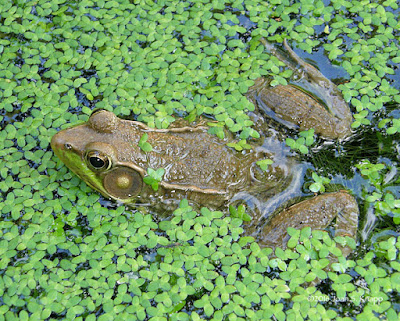 floating in the duckweed. 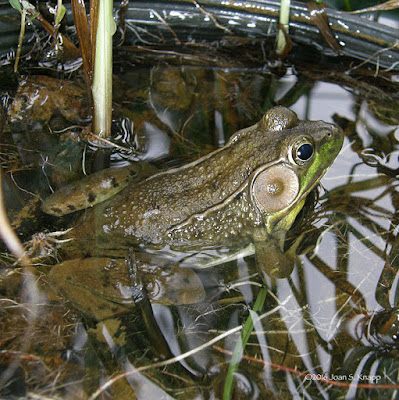 Occasionally, he will make its way to another shallow container to hunt.

Recently a second Green Frog has joined the first one in the container where I’ve seen them siting together on the edge of the barrel.

Hey Joan!
How are you doing? I have noticed a decline in the number of frogs/toads in my yard. We used to have a great many, now we hardly see them. That's not good, I know that much about nature.
Take care!

Doing great! How about you?
I think the dry weather we had in spring/early summer really discouraged the frogs, especially the larger terrestrial frogs/toads. The water containers we have provide a good home for the green frogs. And there are products to kill mosquito's and their lava, so they're safe to have around. I bet most of the larger frogs have retreated to areas around creeks where it's been more humid.