March 4th, 2013. Dimpled troutlillies (Erythronium umbilicatum) are among the earliest wildflowers in this area. We’ve found them at the Davidson-Arabia Mountain in DeKalb County at the Bradley Mountain trailhead and along the bank by the trail on the west side of Arabia Lake. The best concentration of plants we’ve found so far, however, has been in the Piedmont National Wildlife Refuge in Jones County, Georgia. We photographed them in the Piedmont National Wildlife Refuge in 2011 but they didn’t bloom well last year.

It was getting a bit late but we drove down to the Piedmont NWR on the off-chance that they might be blooming again this year. In past years, we’d arrive at this spot later in the afternoon when it was cloudy or after the sun had dropped behind the trees to the west. This time, we reversed our route and arrived at the spot while the sun was still shining on the embankment where many plants bloom. We were in luck and just in time. We didn’t find any plants with buds; all flowers had opened. 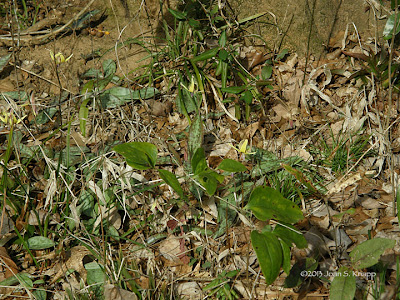 A cluster of lilies were blooming in the grass at the edge of the woods. The leaves were partially covered with grass and the flowers ‘blended’ into their background. 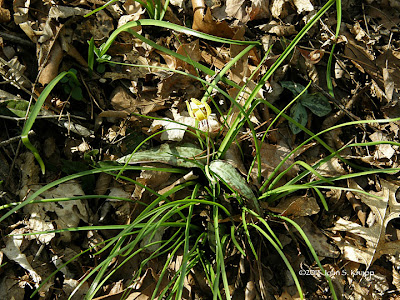 This flower had opened completely. The petals had curled back over themselves. To the right and a little above is a trillium (Toadshade Trillium, Trillium cuneatum); it doesn’t have a bud and won’t bloom this year. The long, glossy leaves are evidence of Atamasco lillies (Zephyranthes atamasca) which will bloom in a few weeks. 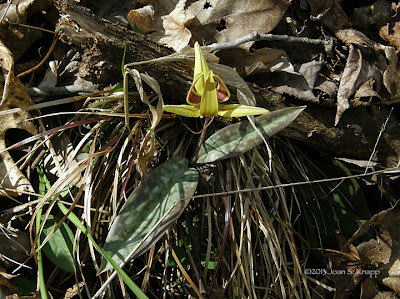 A closer view of an individual plant. 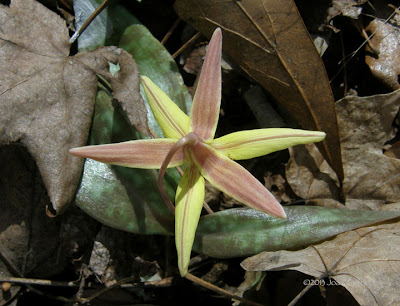 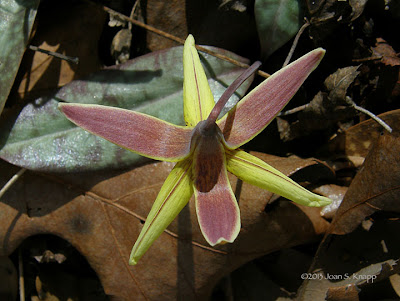 The upped sides of petals of some flowers were pale whereas others were more intensely colored. 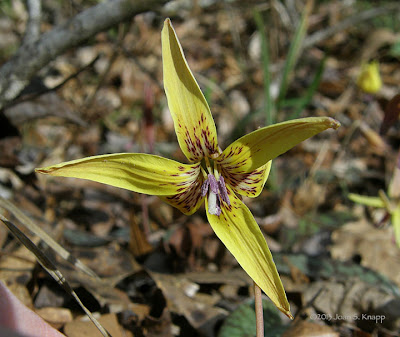 Looking at the flower from below

This year, we saw the anthers in different stages of development… 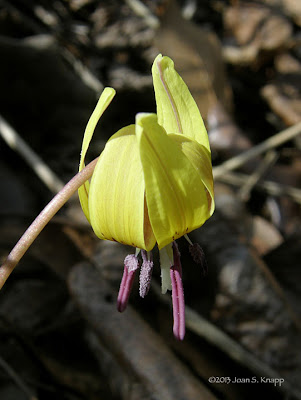 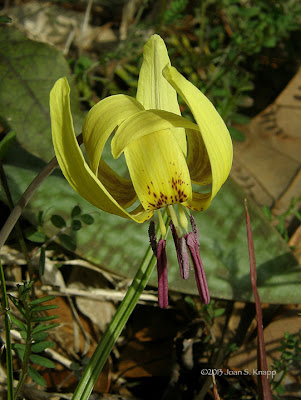 These images show anthers in various stages of development. One anther is ‘smooth’, showing no visible pollen, another anther is maturing at the top showing pollen, and a third anther is ‘powdery’ with pollen along its length, and another has almost dried up. The pollen is purple, an indication that these were, indeed, the Dimpled Troutlily (E. umbilicatum) rather than the Dogtooth Violet (Erythronium americanum) which typically has yellow pollen. 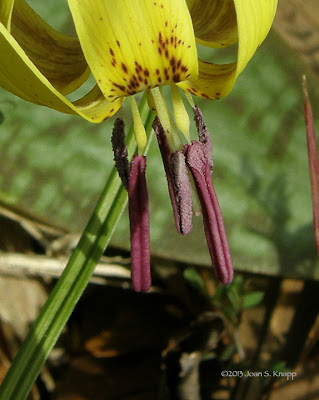 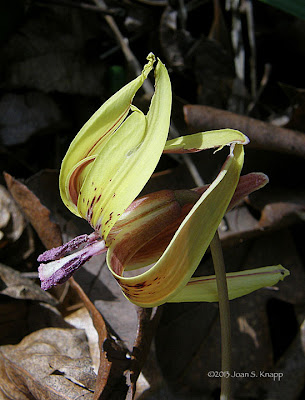 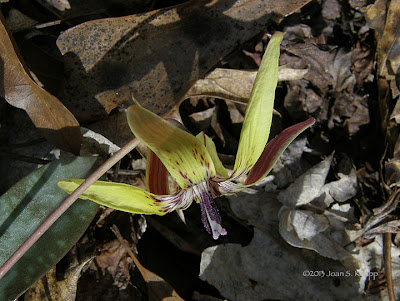 The anthers on these flowers, although pollen is still present, are beginning to dry out. The style and pink stigma are clearly visible in these images. 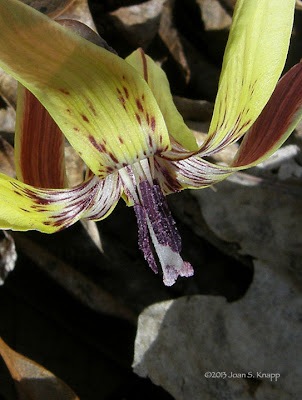 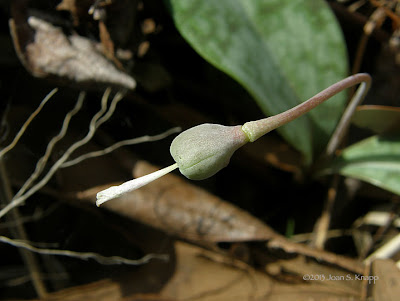 We also found that a couple of plants had well-developed seedpods. These seedpods were clearly ‘dimpled’, another indication that these are E. umbilicatum rather than E. americanum which does not have the dimpled tip.

There are two Erythronium species with yellow flowers that occur in Georgia: E. umbilicatum and E. americanum. At a casual glance, they appear identical but can be differentiated based on the color of the pollen and the shape of the seedpod.

Erythronium umbilicatum (Dimpled Troutlily) is native to the United States, being found from Maryland west to Kentucky, south to Georgia and Florida.  In Georgia, it is found in counties in North Georgia and extending into some counties in the Upper Coastal Plain.

Erythronium americanum (Dogtooth Violet) is native to North America, being found in the Canada (Maritime Provinces, Quebec and Ontario) and the United States from Minnesota south to Louisiana and east to Georgia; it’s not been documented in Florida. In Georgia, it has only been documented, with specimens, from four counties: Union, Stephens, Oglethorpe, and Baldwin.

Both Erythronium species are distributed most densely in the southeastern states with E. americanum is distributed more  widely than E. umbilicatum. 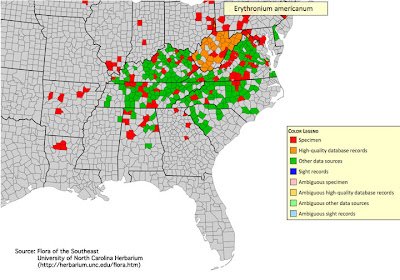 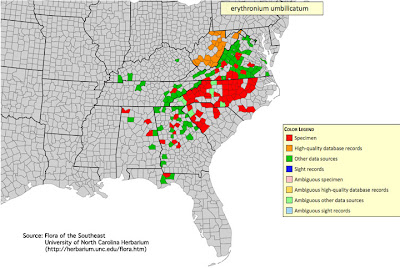 Jim Fowler recently published a post - Erythronium americanum (Trout lily, Dogtooth violet) — an early-blooming wildflower – that shows how similar the flowers of this species are to E. umbilicatum but also clearly shows the yellow pollen. Occasionally, according to Name that Plant, E. umbilicatum flowers may have yellow pollen leaving the dimple-shaped seedpods as the easiest observable characteristic to differentiate this species from E. americanum. Images in the Southeastern Flora sites include photographs of the seedpods of each of these species.

It was encouraging to see these lilies blooming again in this location and to see the dimpled seedpods that confirmed this identification.
Click on an image to view a larger image