February 24th, 2013. We took a short trip down to Charlie Elliott Wildlife Center/Clybel Wildlife Management Area after which we drove across into Newton County. In a field on McDonaldRoad, we spotted a big oak tree. 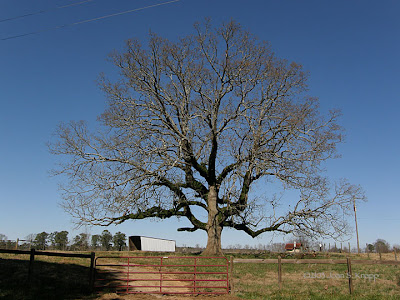 It had grown in a beautiful specimen shape in the absence of other trees. The tree is easily 150-200 years old.

Some of the branches seemed unusually thick compared with others but a closer inspecting showed that they were colonized by Resurrection Fern (Pleopeltis polypodioides), a creeping fern that may be seen on rocks and trees in the area. The fern gets is name from the fact that it dries up and can survive long periods of drought. We’ve been treaed to sightings of the fern in many locations in the last month or so. 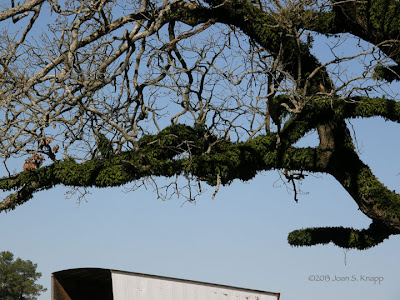 The fern is well established and growing thickly along the lower horizontal branches where its roots have been able to feed on nutrients in the cracks on the bark in areas that are in deep shade when the tree is in leaf during the Summer. 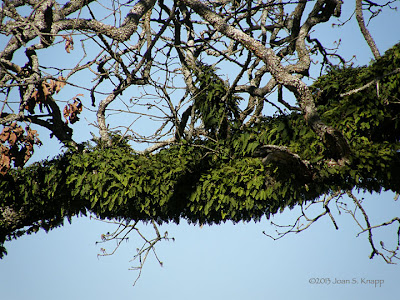 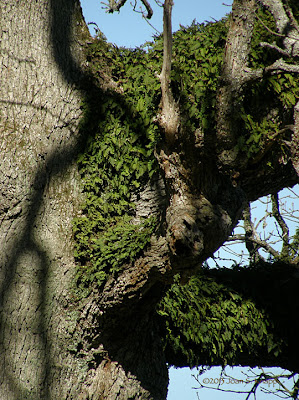 The fern hasn’t populated the trunk but did allow a well-lighted sighting in the sun.

This is the most impressive example of Resurrection Fern that we've seen in north Georgia.

Pleopeltis polypodioides (Resurrection Fern, Scaly Polypody) is native to the UnitedStates where its found from Massachusetts west to Kansas and south to Texas and Florida. In Georgia, its been documented in counties throughout the state.
Click on an image to view a larger image

Hey, this is just the next county over from me, that tree is amazing. I wonder if I could find it?

I'm sure you can. Just click on the link which is for a Google map and back out to see the surrounding roads. Good hunting!