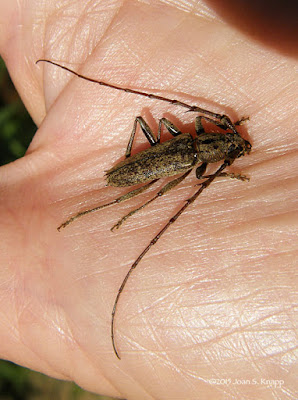 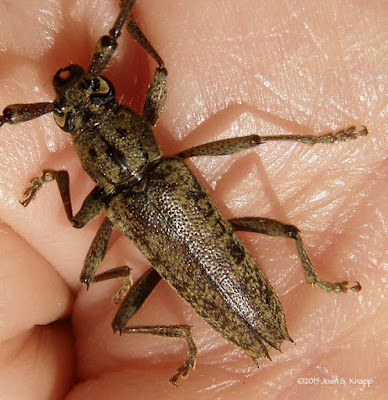 I found this beetle in the kitchen. I’m not sure how it got there but I took it outside to photograph it and let it go. Then I had to learn something about it. Bug Guide provided the identification.

The specific epithet (species name) ‘mucronatum’ means ‘pointed’ and refers to sharp femoral spines; a spine is clearly visible on the second leg in the lower image. Beetles are 12-20 mm in length with very long antennae, in this case almost twice the length of its body.

They are considered very common in the southeastern United States but their range extends from Ontario to Minnesota, south to Arizona and Florida. They have a wide range of host plants include most eastern hardwoods & shrubs. They lay their eggs under the bark of dead hardwoods. Their larvae feed beneath the bark during their first year and then deeper during the second year. 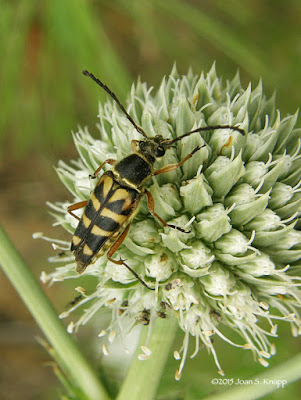 We have a small area of wildflowers under one of the Pecan trees in the field. Purple coneflowers and Butterfly Milkweeds have bloomed here for several years. We don’t mow the area when these plants are blooming. Consequently, other plants such as goldenrods fill the area as well.

So, it was only when I wandered deep into the chest-high area that I discovered a couple of small Yuccaleaf eryngo (Eryngium yuccifolium) had volunteered in the patch and were also blooming. And there on the Yuccaleaf Eryingo was a Zebra Longhorn Beetle (Typocerus zebra). It was a nicely colored beetle with strong, clearly defined bands of ochre yellow on a dark background. A really nice specimen since the bands on many beetles may appear 'faded.'

These beetles range from Virginia to Oklahoma, and south to Texas and Florida. They are found on flowers in fields, roadsides, mostly adjacent to woodlands with pines, mainly between March and July based on submissions to Bug Guide. They are thought to feed on nectar and pollen. Their larvae live in decaying pine stumps.