I first spotted these… 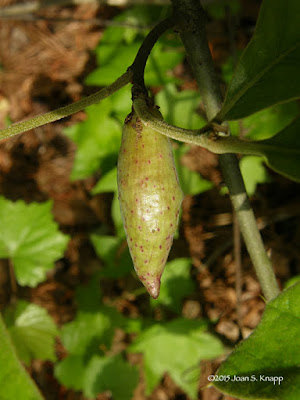 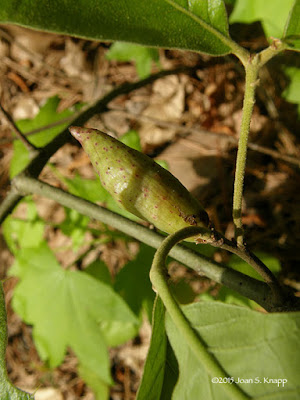 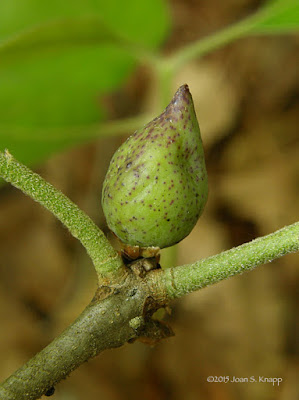 unusual galls on an… 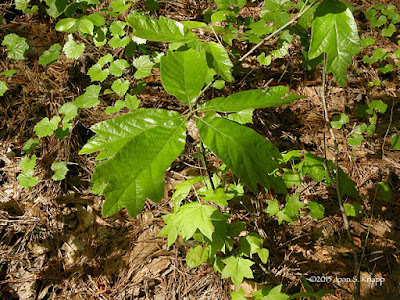 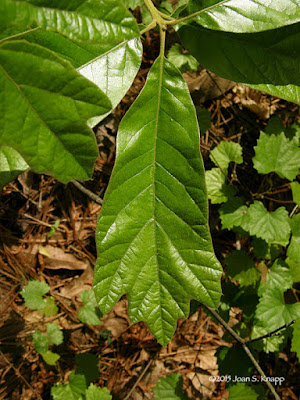 As usual, I ‘googled.’ I tried the terms ‘gall’ ‘oak’ ‘stem’ etc. and got many results, none of which included these galls. I submitted these images to Bug guide (http://bugguide.net/).  The oak was identified as a Blackjack Oak (Quercus marilandica). The gall was not identified and placed in the ‘unidentified galls’ category. I also expanded my searches to include ‘Quercus marilandica’ and/or ‘Blackjack Oak’ with no success.


This is a closed group but I was granted access very quickly. At first, it didn’t occur to me to submit the oak to this group but when I did I got an almost-immediate response from Mr Charles Davis, who provided me not only with the correct identification for this oak, but also the identification of the gall, and a reference to a publication describing oak galls including this one.

The oak is Quercus falcata, known as the Southern Red Oak/Spanish Oak. The gall is caused by the cynipid gall wasp, Amphibolips acuminata.

When I ‘googled’ ‘gall’ ‘Quercus falcata,’ I got two results for this gall – both in Bug Guide. The first is for the observation provided by Mr. Davis (http://bugguide.net/node/view/1081451/bgpage) in which the host plant and the causal agent is identified. The second result is for another ‘unidentified gall’ on ‘Quercus marilandica’ (http://bugguide.net/node/view/1078120/bgimage). A comment on this record is that the host oak is ‘Quercus falcata,’ not ‘Quercus marilandica.’

The publication that Mr. Davis referred me to is a Google Books reproduction of an article entitled ‘Species of Amphibolips and their Galls’ in the Bulletin of the American Museum of Natural History from 1909. Interestingly, the article states that the specimens were collected from… ‘twigs of the black jack oak ‘Quercus marylandica (sic)’ Mr. Davis noted that this was very likely a mis-identification of the host species by the entomologists collecting the gall. This seems a reasonable assumption considering that in the case of the second observation and mine, the leaves of the young oaks were also misidentified as Q. marilandica.

So... ‘my’ galls have now been successfully identified as occurring on a Southern Red Oak (Q. falcata) and being caused by a cynipid wasp, Amphibolips acuminata. 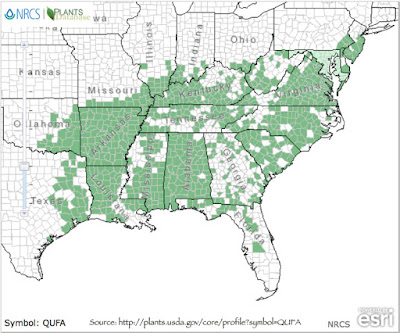 Southern Red Oaks occur throughout the southeastern United States, from Delaware to eastern Texas. This species has been documented in relatively few counties in Georgia. This observation was made in Barrow County that is not included in this distribution map; this species may be distributed more widely in this state than has been documented.

Observations of this gall appear to have been made widely in the eastern/southeastern United States. A newsletter from the South Carolina Association of Naturalists, some of whose members observed this gall attached to a ‘black jack oak’ (another misidentification?). They ultimately received an identification from Dr. George Melika, Head of the Central Plant Pest Diagnostic Laboratory in Budapest, Hungary, who noted that observations of these galls had been made ‘…along the Eastern Coast of USA, from Florida, Georgia up to Virginia and even Washington DC. It is present in PA also.’

Special note: I would not have identified this gall if it had not been for the invaluable assistance provided by Mr. Charles Davis on the Facebook ‘Plant Identification’ group ( https://www.facebook.com/groups/156706504394635 ). Consider joining this group if you have plants you wish to identify.