September 1st, 2012. It was the Labor Day (US) holiday weekend so we took the opportunity to make an overnight trip into the Chattahoochee National Forest. Our first stop was a side trip down to Dockery Lake in the Chestatee Wildlife Management Area. We found interesting wildflowers and fungi along the road down to the lake and by the road near the lake.

As we drove along the level section of road before the climb back up to the highway, we spotted a nice specimen of coral fungus standing in an open area covered with fallen leaves. It begged to be photographed so I hopped out and made my way towards it. As I got near, I became aware of something else of interest; it was one of those ‘I think you’re going to want to see this’ moments. I’d found a small stand of Pinsap (Monotropa hypopithys). I knew about Indinapipes (Monotropa uniflora) although I’d never seen it but I didn’t know about Pinesap, its cousin. These were young plants; some were just emerging from the leaf litter.

There are only two species – M. uniflora and M. hypopithys – in the genus Monotropa. These plants are unusual in that they don’t contain chlorophyll and can’t produce energy by photosynthesis. They get energy by parasitizing fungi that grow in association with trees (mycorrhizal fungi). The ‘stems’ are not true stems but flower stems.

As a result the plants are not green but pale colors. According to Connecticut Wildflowers, flowers that grow in the summer are usually a pale lemon-green and those in the fall are reddish. Those we found were distinctly reddish. 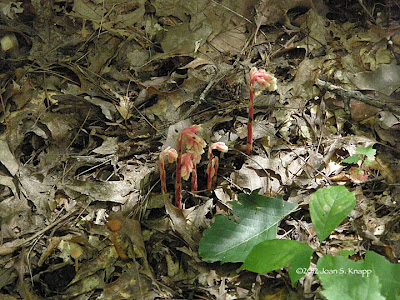 A cluster of flowers in the leaf litter. These were growing in the shade but the sun would shine through fleetingly. 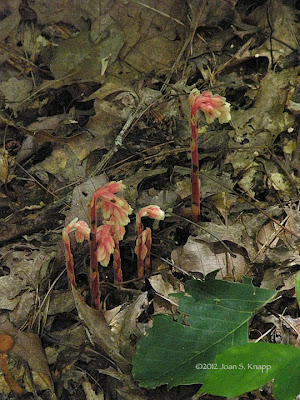 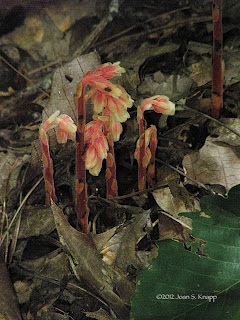 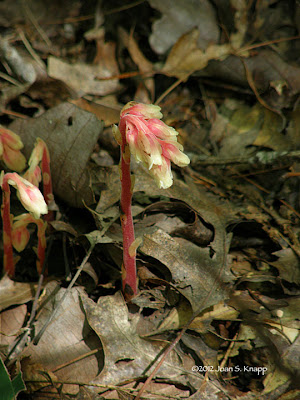 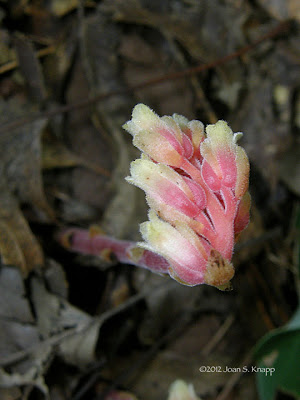 Looking down on flowers 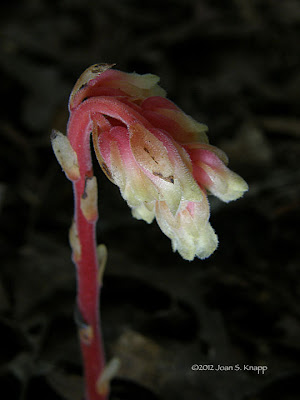 A close-up view from the side

As we left, W spotted… 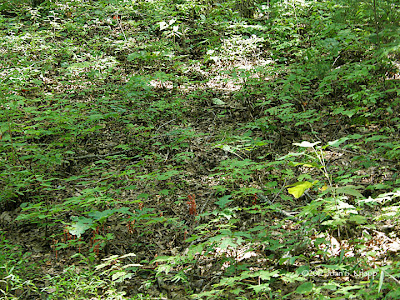 a cluster of flowers among the leaves 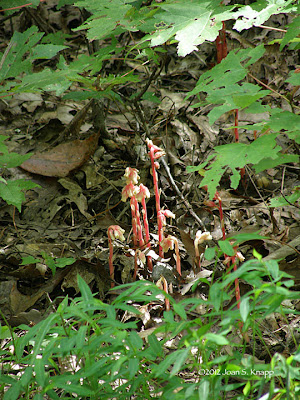 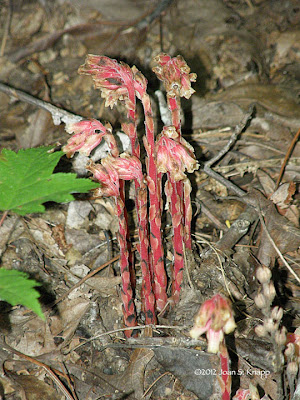 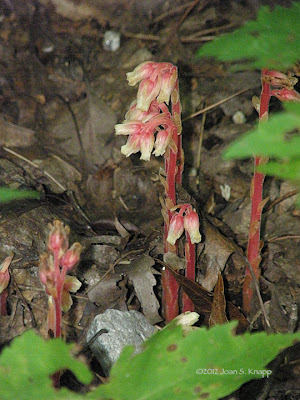 Close-up views of a couple of clusters 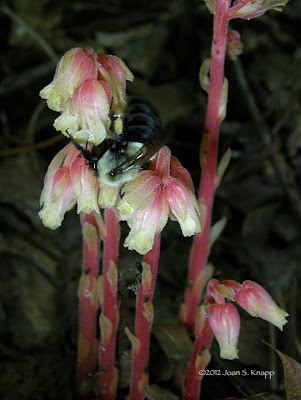 As we were photographing, a bumble bee flew up to feed on the flowers.

This was a totally serendipitous find. Although this flower wasn’t on our bucket list, it quickly made it on the list to be checked off. Now to keep an eye out for Monotropa uniflora (Indianpipes)
Click on an image to view a larger image

I have occasionally seen these in midsummer in their pale yellow form but never the reds of the fall. Great find!

Thanks.
It's going to be interesting to return to this spot earlier (June) to see if there are pale green plants.