February 23rd, 2014. We installed a couple of log feeders in mid-December, 2013. Our inspiration came from a log feeder at the Ontario FeederWatch Cam sponsored by the Cornell Lab of Ornithology that was visited regularly by a Pileated Woodpecker (Dryocopus pileatus). I thought it would be fun to see if we could attract woodpeckers to one at our location since there we’ve seen four different woodpecker species: Pileated Woodpecker, Northern Flicker (Colaptes auratus), Downy Woodpecker (Picoides pubescens), and Yellow-bellied Sapsucker (Syphyrapicus varius). 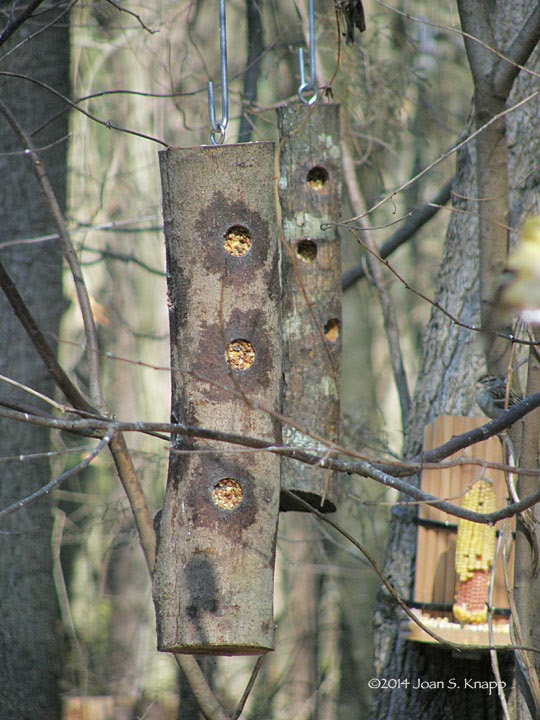 W made the logs by routing a series of 1-inch holes approximately 1 to 2 inches deep around a log about 12 inches in length. An eye screw was inserted in one end of the log which was then suspended from tree limbs on metal hangers. The holes were filled with a mixture of peanut butter, vegetable shortening, and a bird seed mix of Millet, Milo, Corn and Sunflower Seeds. 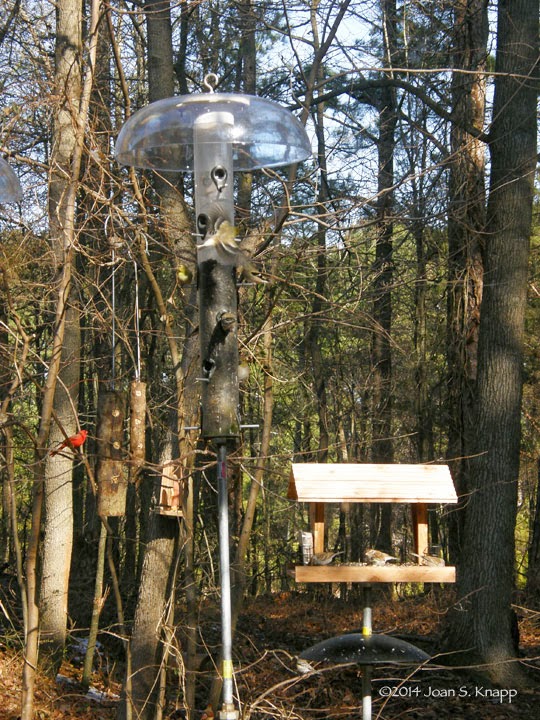 
I didn’t really expect to see woodpeckers at the feeder this Winter. So I was surprised and delighted when a male Downy Woodpecker visited the feeder within a day. I didn’t notice a female until three weeks after the first log was hung but she could have arrived earlier without my noticing. 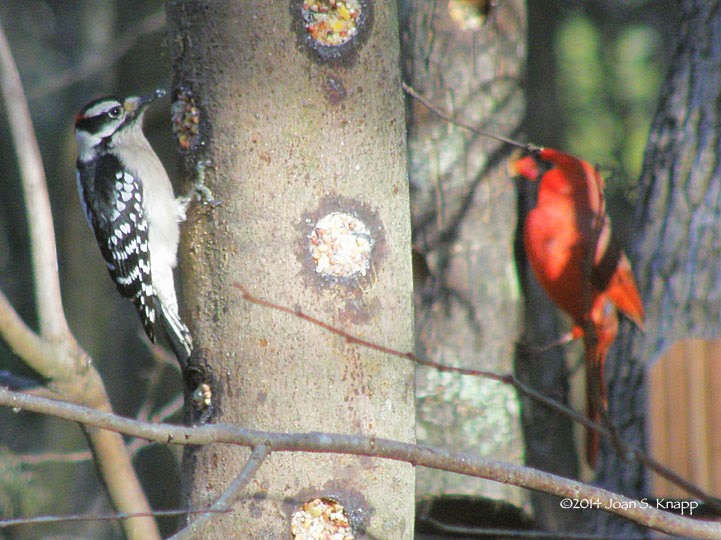 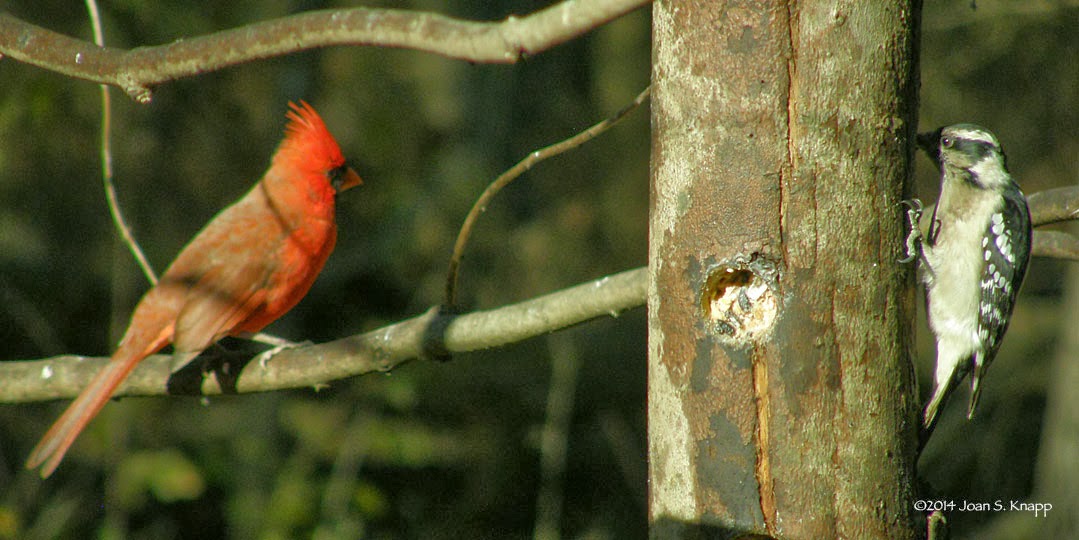 Downy woodpeckers are quite small; smaller in length – 5.5 to 6.7 inches – than
Northern Cardinals which are 8.3 to 9.1 inches. 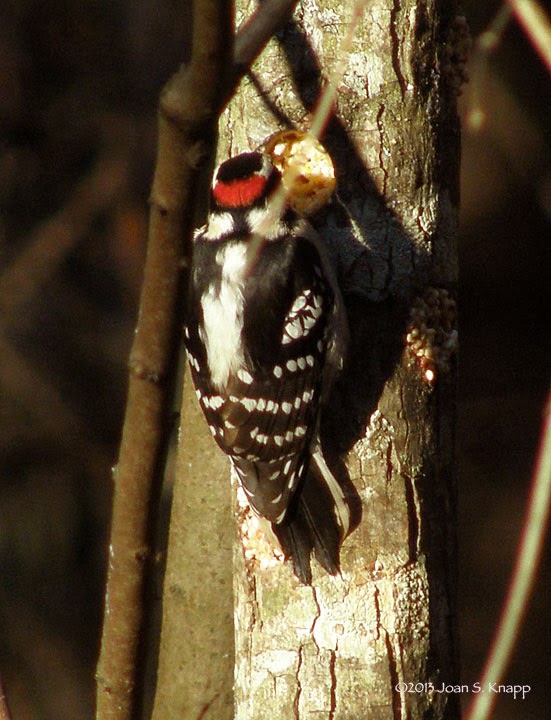 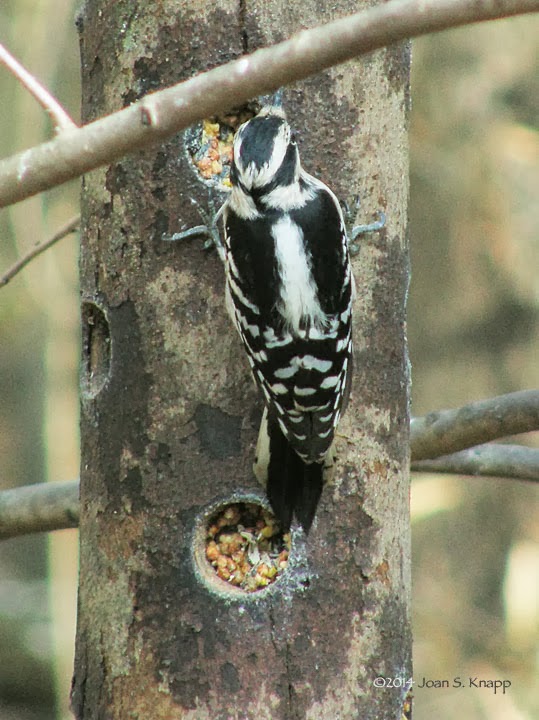 The male [top] has a red patch on the back of the head; the female doesn’t have the red patch.

It’s interesting to watch them feeding... 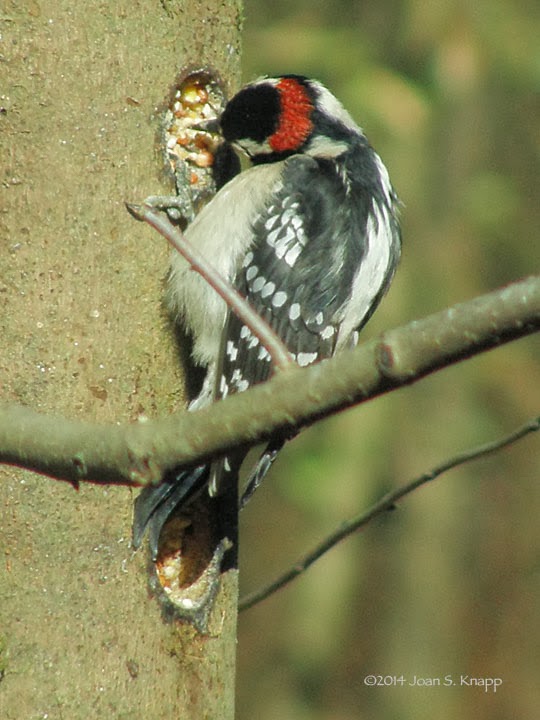 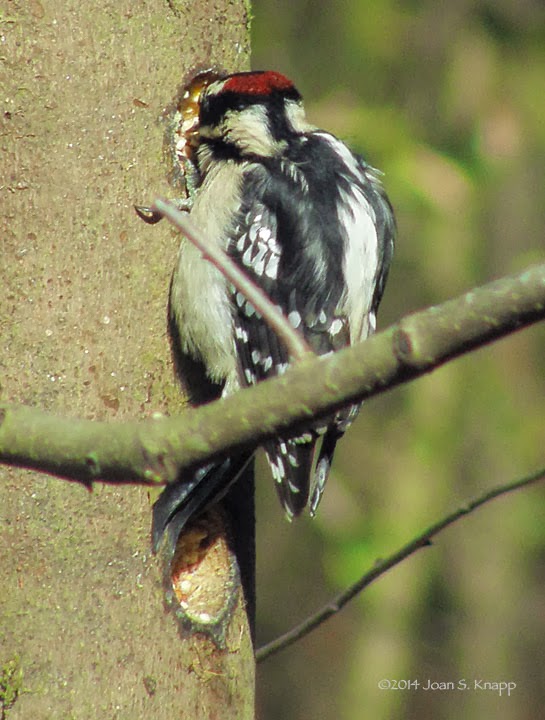 From sizing up what’s in the hole to… 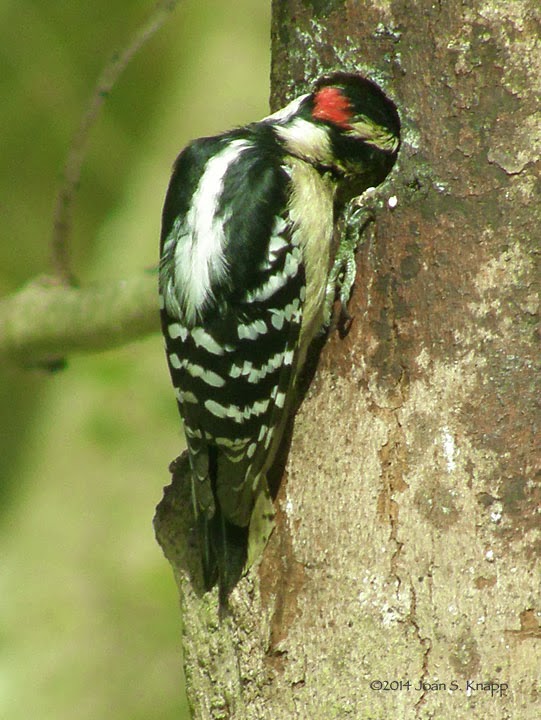 Actually feeding – sticking their entire head into a hole, to... 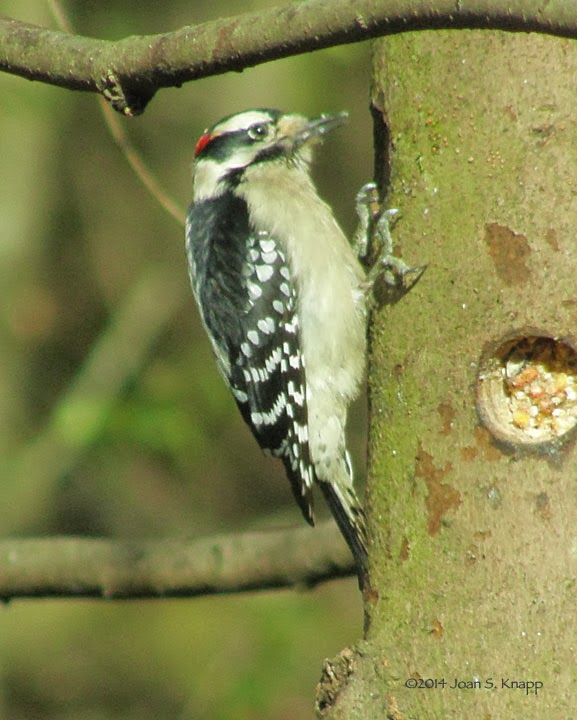 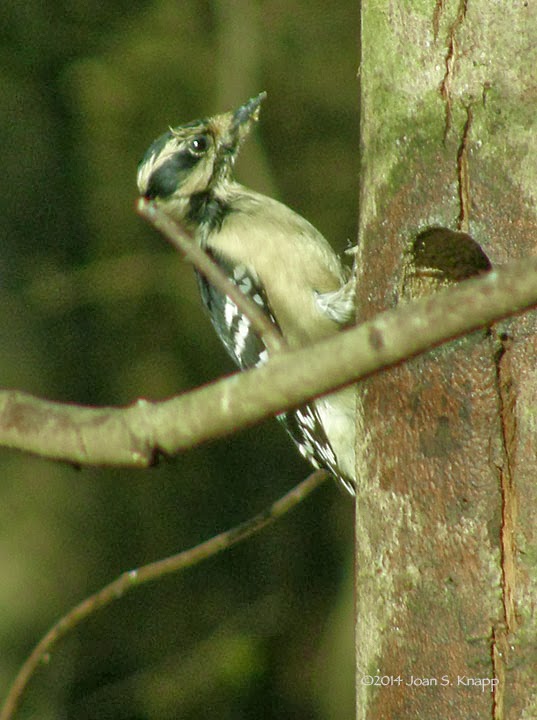 Having beaks covered with food. Sometimes they have to fly over to a nearby tree to clean their beaks.

The males tend to concentrate on feeding. The females will… 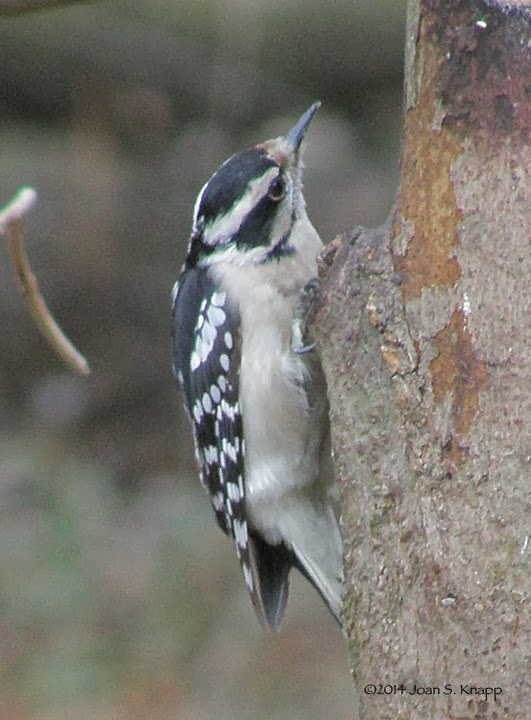 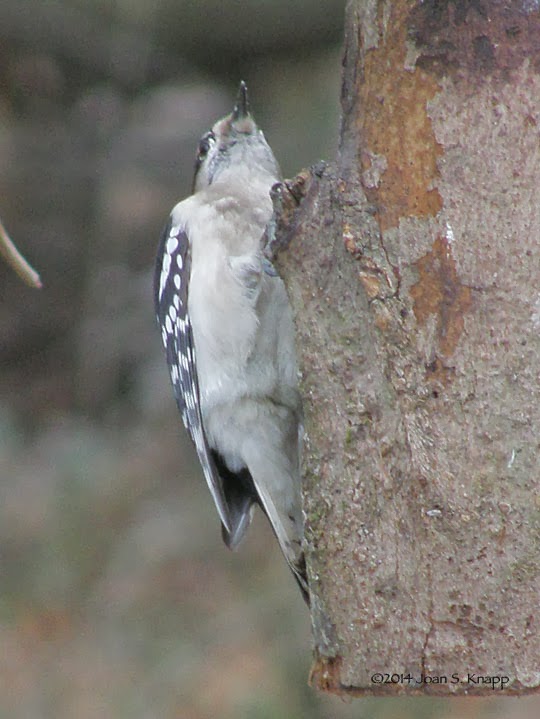 Often look around to keep an eye on their surroundings. 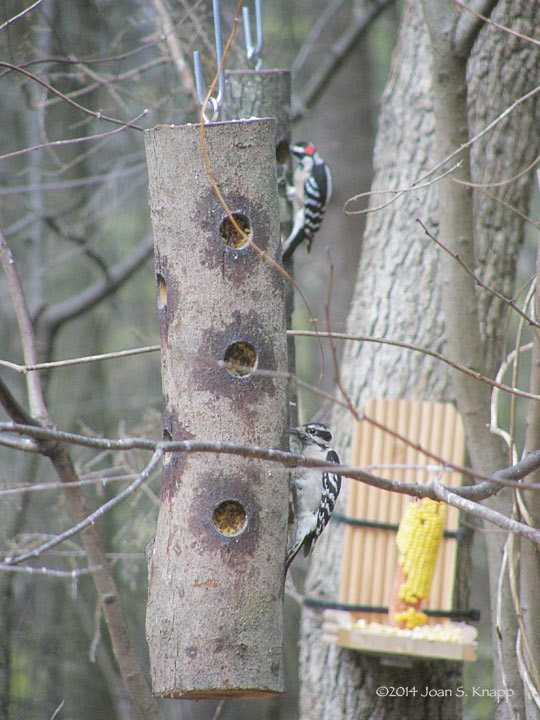 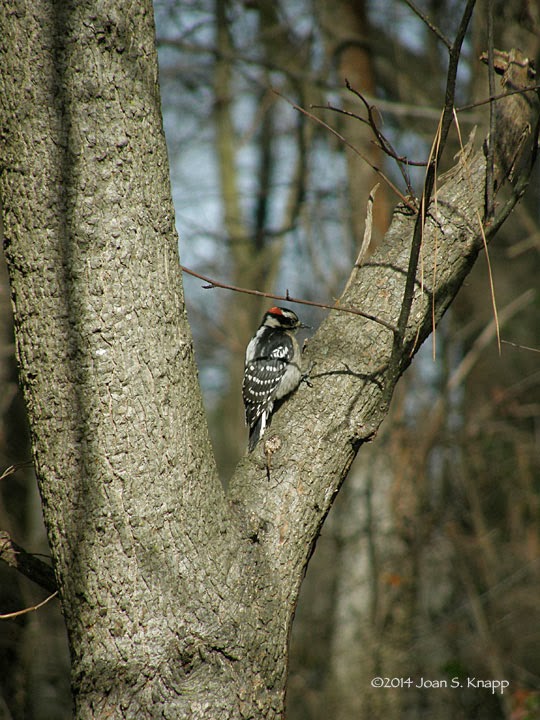 They tend to arrive and leave the feeders by a nearby tree trunk. 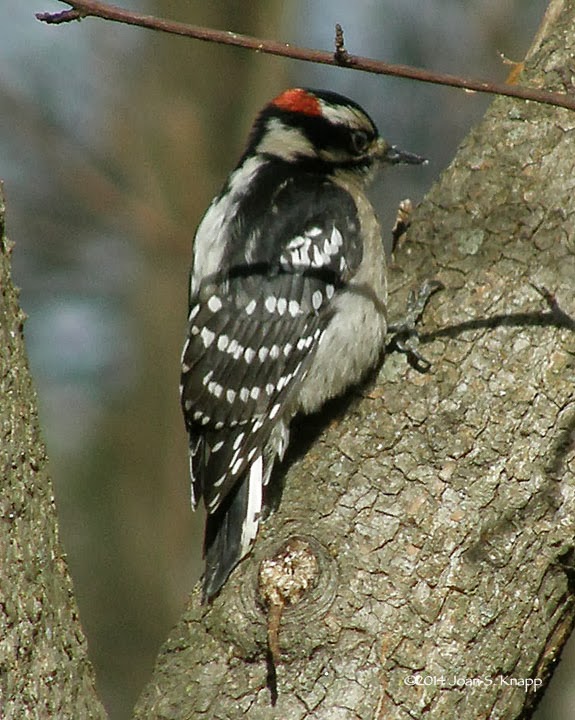 These woodpeckers usually arrive at the feeders soon after light – often before sunrise – and may feed on an off until dusk.