February 17th. Ice was predicted but we weren’t supposed to get any; we were on the edge of the rain/ice zone. The cold kept moving in and the ice began to form at about dusk. Just a millimeter or so. We lost power (and water) at about 10:30 pm. Power was restored at about 1:00 am but we lost it again 15 minutes later. It was about 2 pm before power was finally restored. Luckily, we have a wood stove to keep us warm. 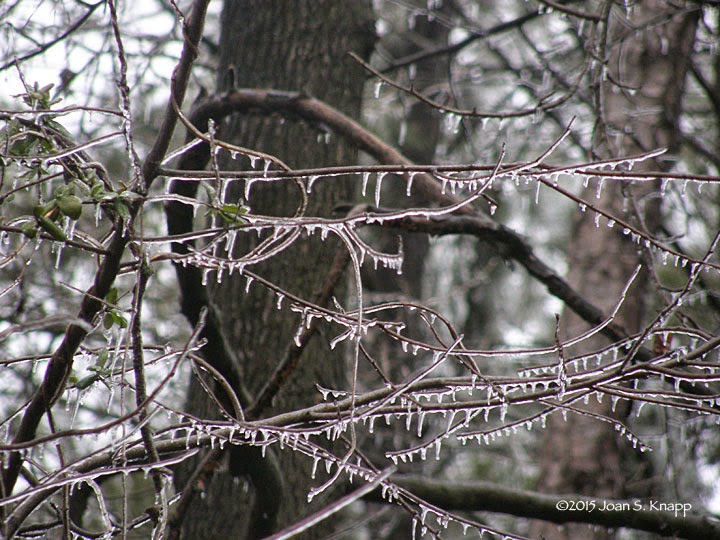 In the morning, icicles were hanging off the branches near the house. 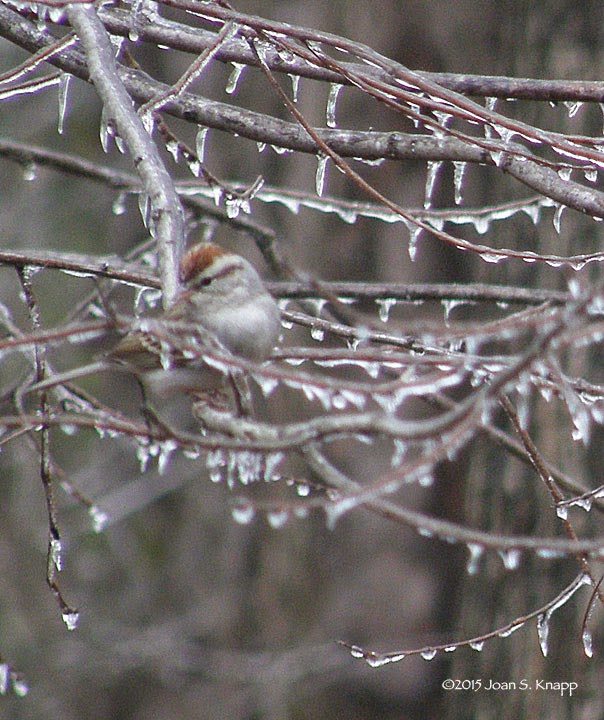 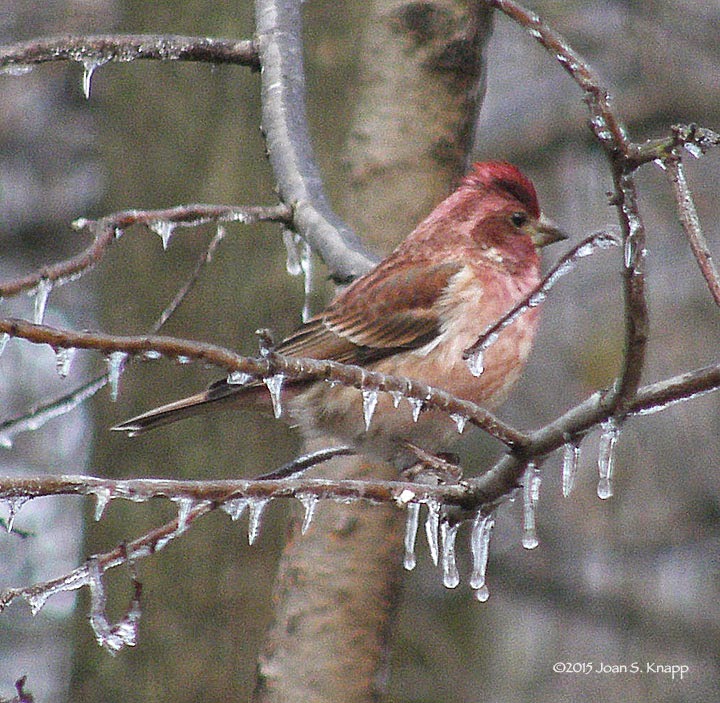 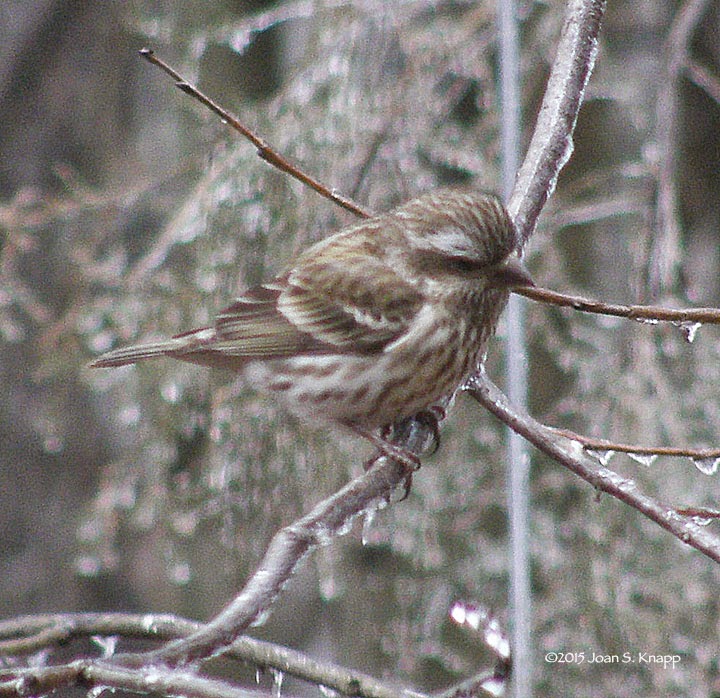 The ‘locals’ -  a Chipping Sparrow, and a male and female Purple Finch - didn’t seem too happy about it.

Usually, we would just rug up and wait it out but I had an appointment and had to go out. Luckily the roads were clear and it was a great excuse to take a camera. 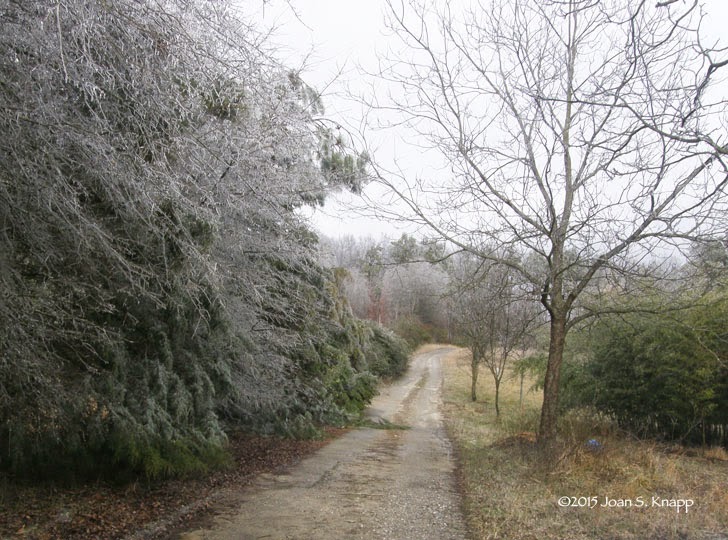 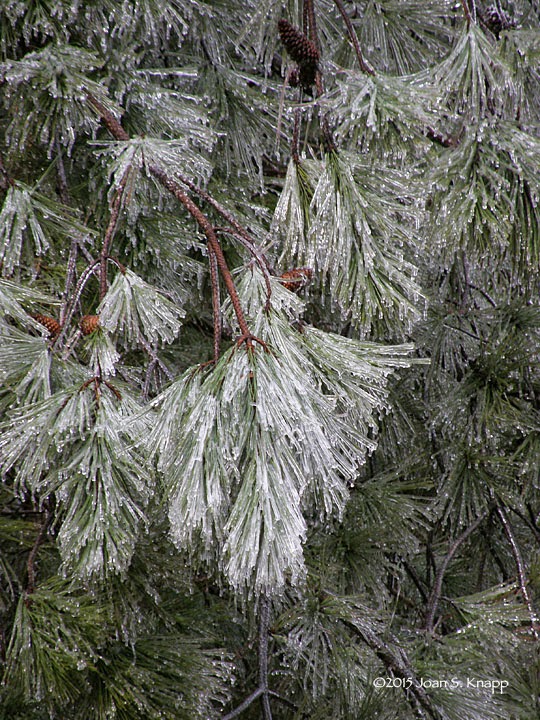 It was clear, even as I drove down the drive, that it was going to be interesting. The ice really weighed down the needles on the Eastern Red Cedars, and… 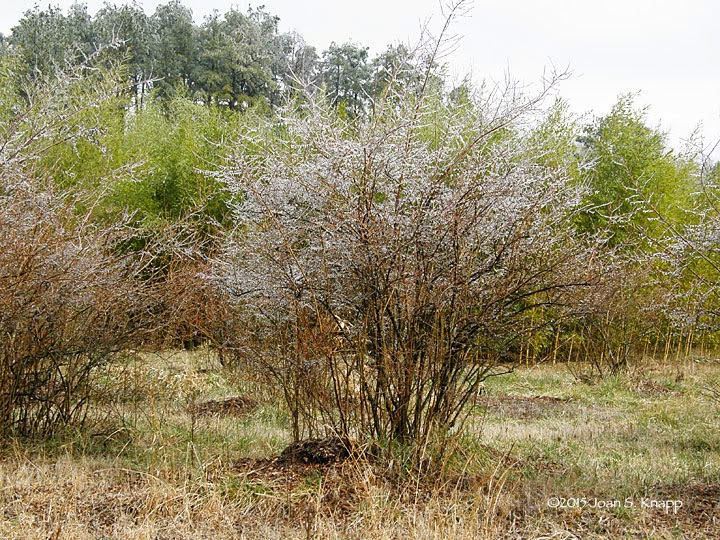 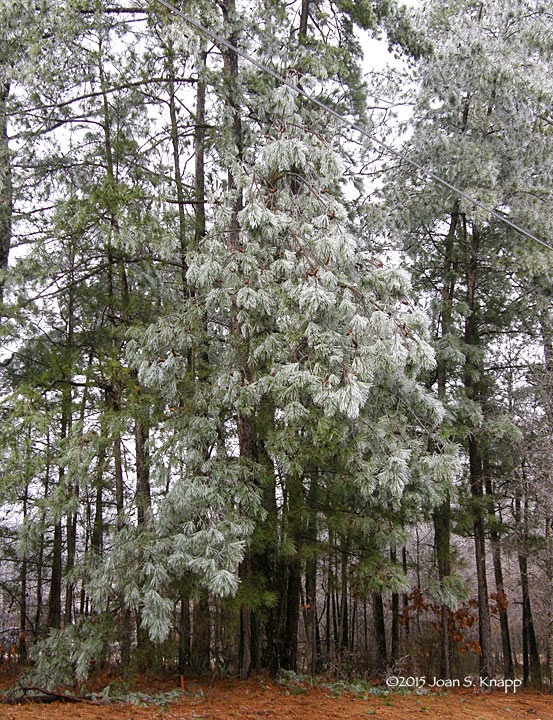 As with the cedars, the ice was thick on the pines along the road. Most of the damage was to the pines. The weight of the ice was too much and branches littered the roads in many places.

After my appointment. It was overcast except for short bursts of sunshine, and the temperatures showed no signs of rising. I was somewhat surprised that little melting had occurred so I went home by a different route to see more of the countryside 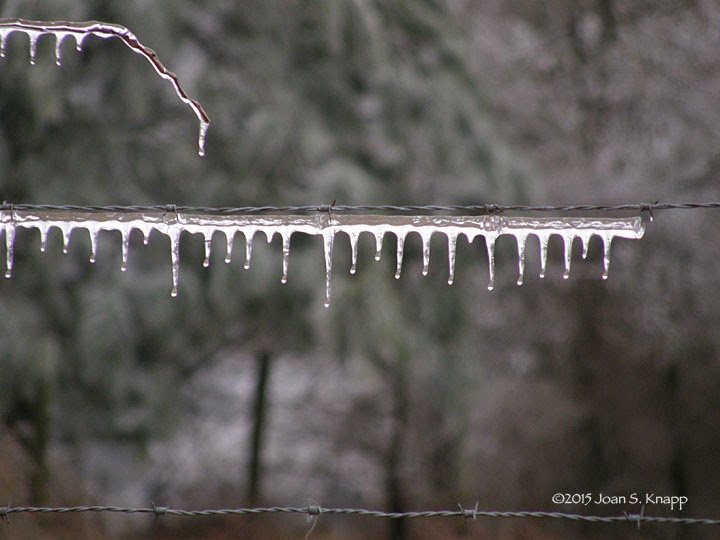 Ice decorated many of the fence wires. 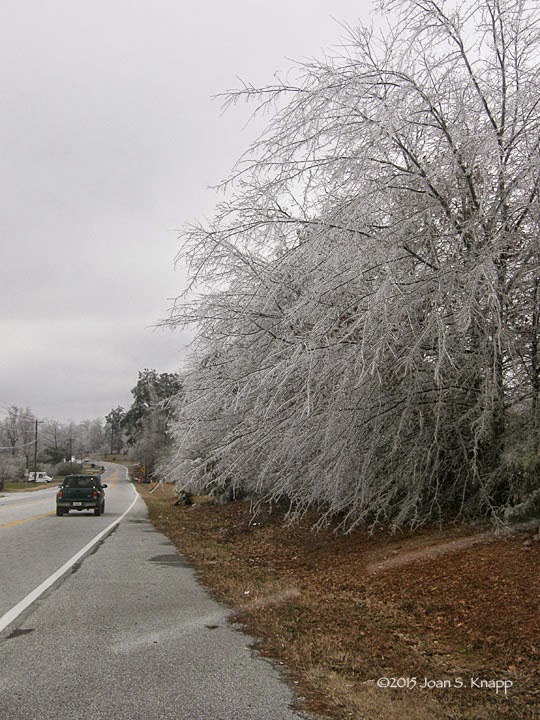 Deciduous trees were sprays of ice. 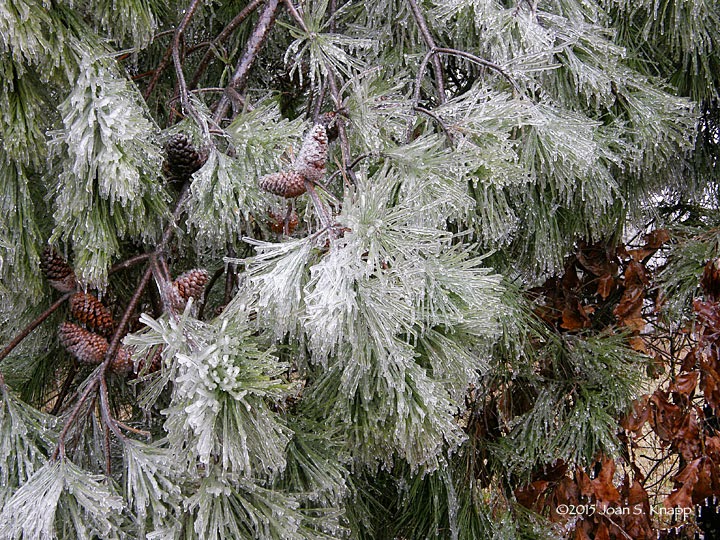 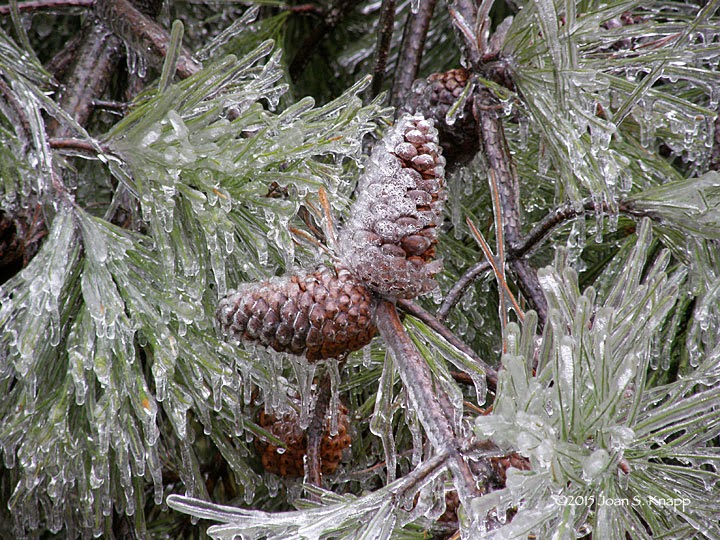 More pines and their cones were coated thickly. 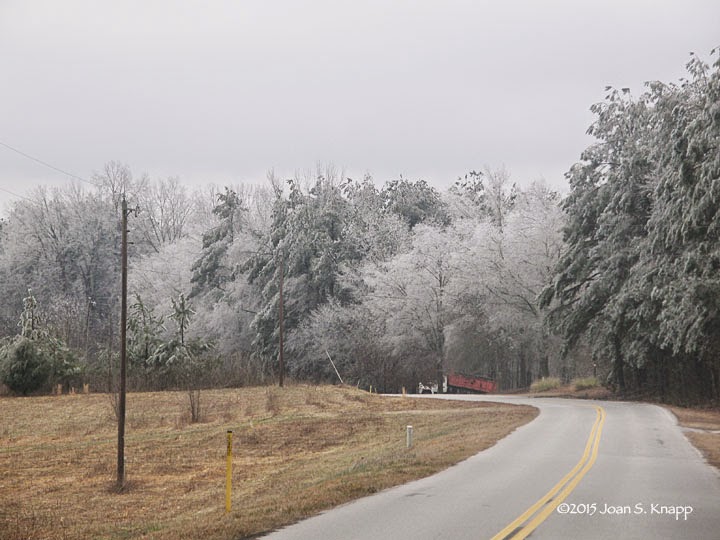 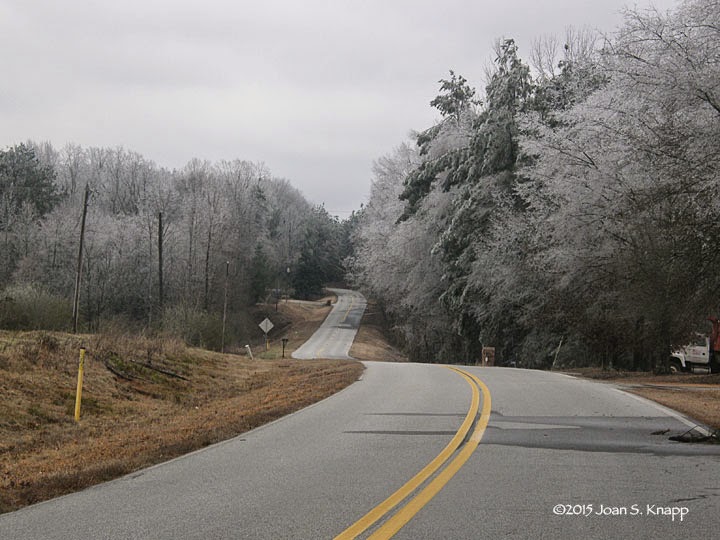 The countryside looked forlorn in the overcast conditions. From a distance, it looked as the trees were covered with snow, but at close range, 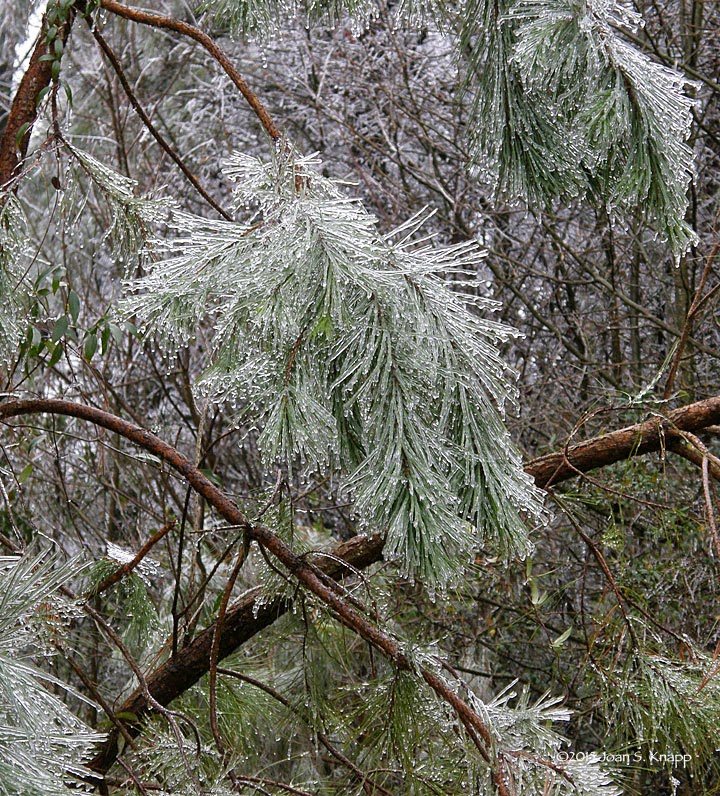 I was reminded it was actually ice

Fortunately, the weather conditions that result in ice accumulations are rare in our area. The temperatures are predicted to remain low for another day or so and the ice is still clinging to trees in protected areas. It’s nice to be able to enjoy them for a short time but it’ll be good when things return to normal again.
Posted by JSK at 7:44 PM