February 6th. I haven’t been to Fort Yargo for a few years and decided to intersperse walks in the park with my trike rides. In previous years, I’ve both walked some of the trails and rowed the lake. If you know where to look, the park has quite a variety of wildflowers. 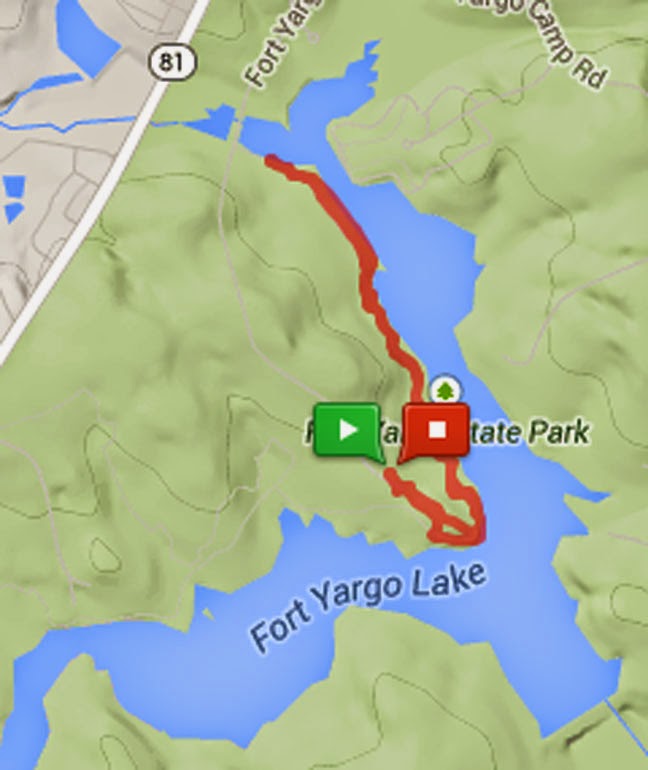 I decided to walk from the Group Shelter A to the Old Fortand back. There isn’t much in the way of plants at the moment but I enjoy the scenery and this was a particularly pretty day. 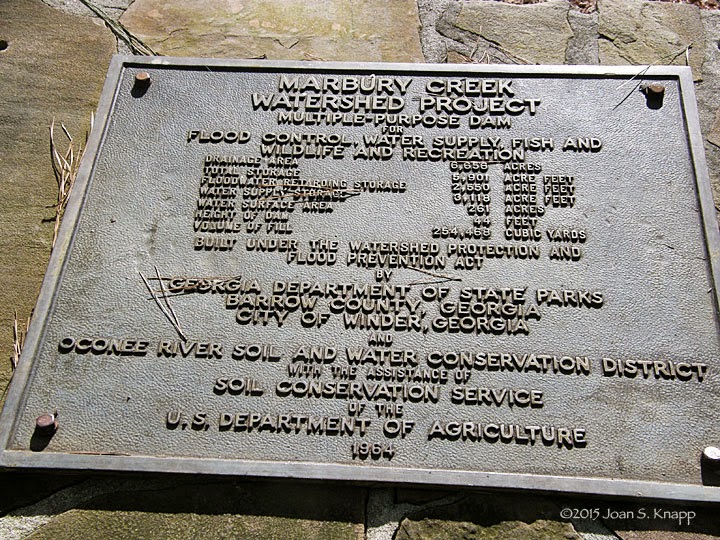 The plaque listing the specifications of the lake which, strictly speaking is an impoundment - a body of water created by a dam - rather than a lake. The dam is 44 feet high and, at its deepest point at full pool, the water depth is 23 feet deep.
04-P2062151.jpg 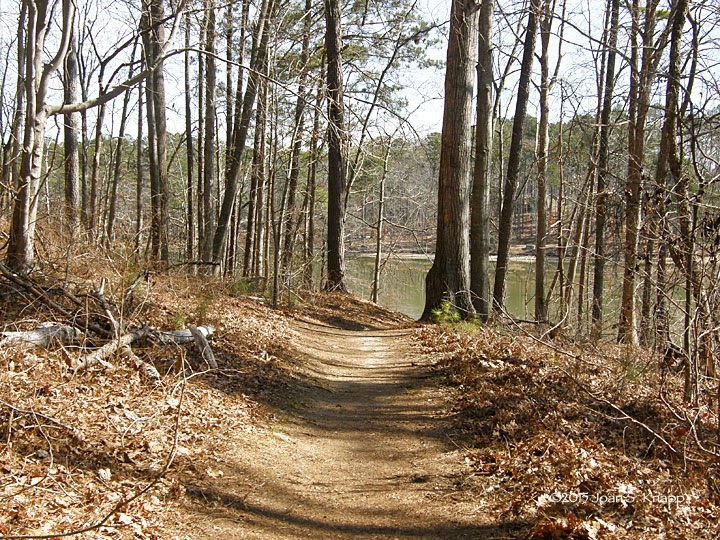 The group shelter is high on a point; the trail drops down to the lakes hore rather steeply. If one works ones way back along a fisherman trail to directly below the plaque, Littleleaf Sensitive-briar (Mimosa microphylla) and Butterflypea (Centrosema virginianum) bloom here. Yellow Passionflower vines (Passiflora lutea) vines bloomed along the trail but appear not to have survived a controlled burn several years ago. Pitty. Pidgeonwings (Clitoria mariana) plants are far less common in the park but hand on the edge of the vertical embankment above the water; these are best viewed from the water. 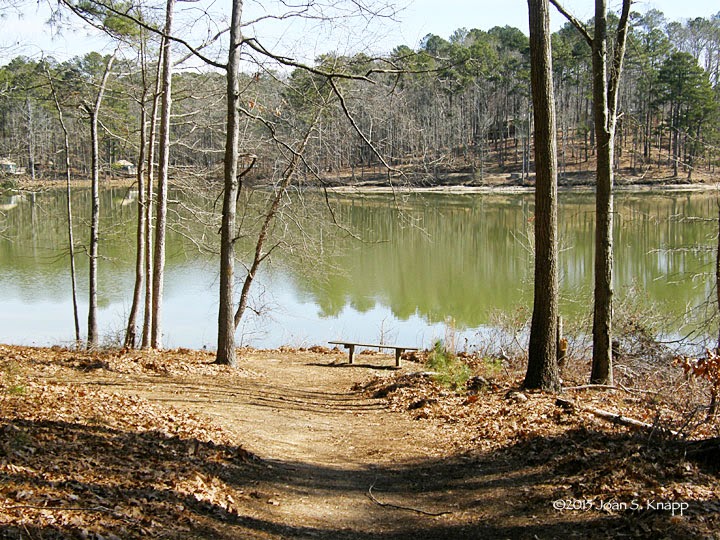 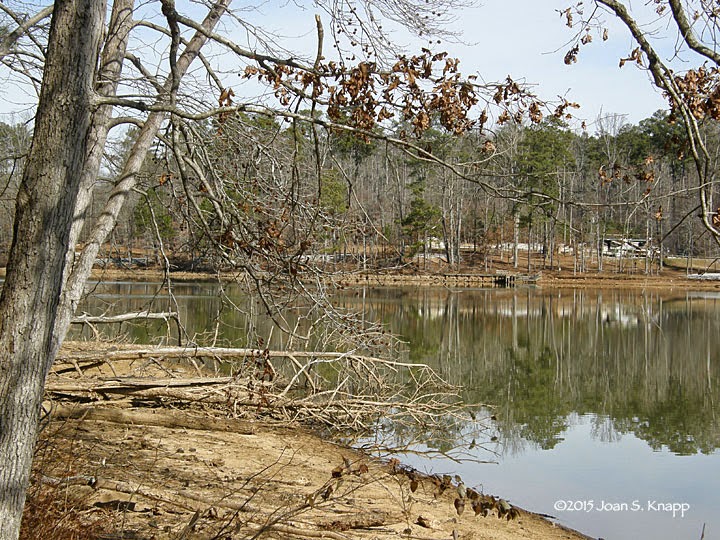 A camping area including drive in/walk in tent camping, yurts (primitive huts) and soon, cottages, is directly across the lake. 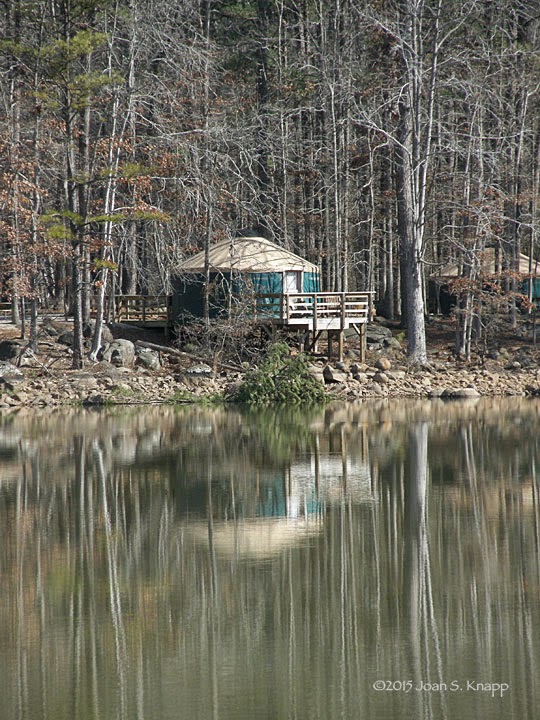 One of the yurts. 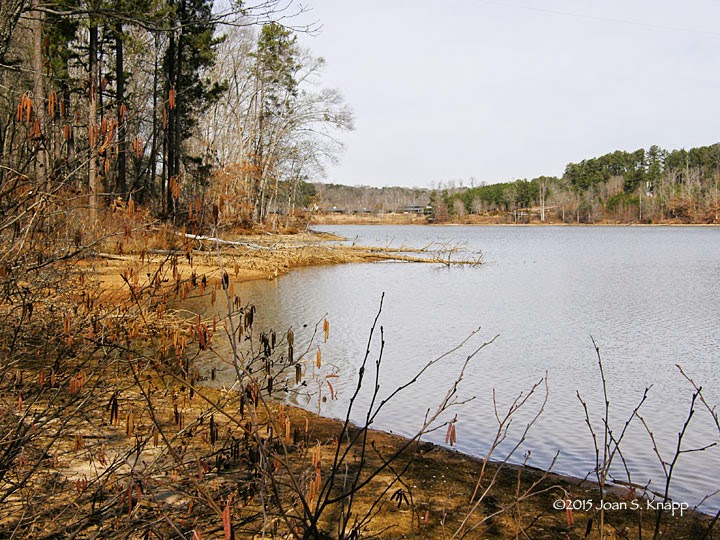 Looking north along the lake shore. The lake level had been lowered; the water is about two to three feet low at the moment, exposing temporary beaches which will disappear completely when the lake fills again. 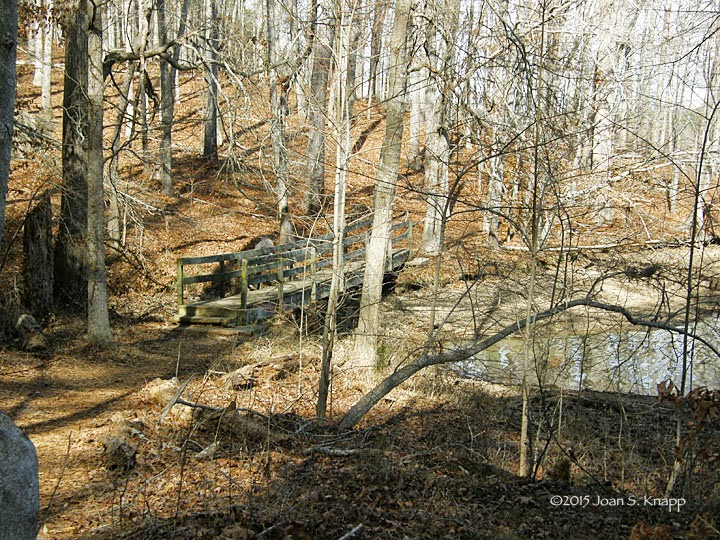 A bridge crosses a drainage into the lake about one-third the way along the shore between the shelter and the Old Fort. 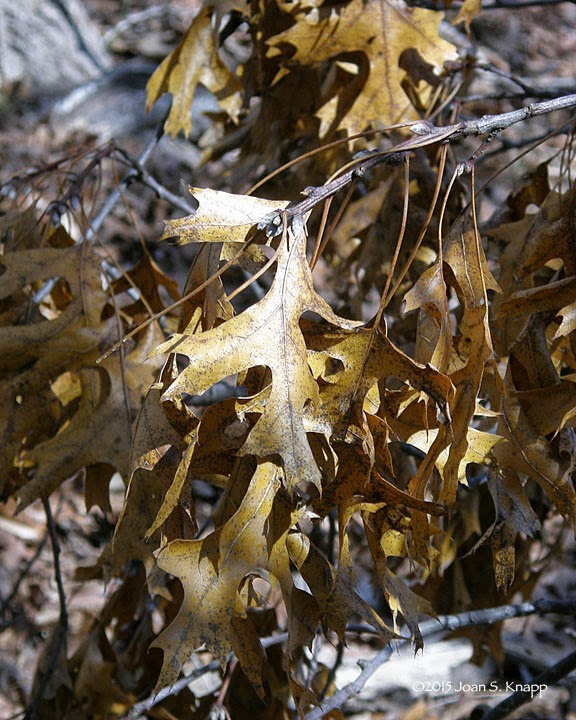 One of the few oaks that is tenaciously holding onto its leaves. 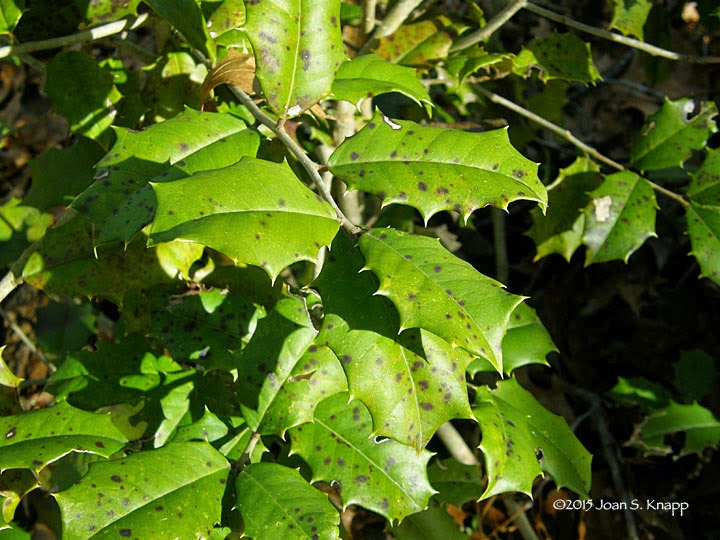 A small holly shrub; I don’t think I’ve ever seen berries on this bush. In addition, I’ve seen a lone Perfoliate Bellwort (Uvularia perfoliata) plant blooming at the base of one of the larger deciduous trees. 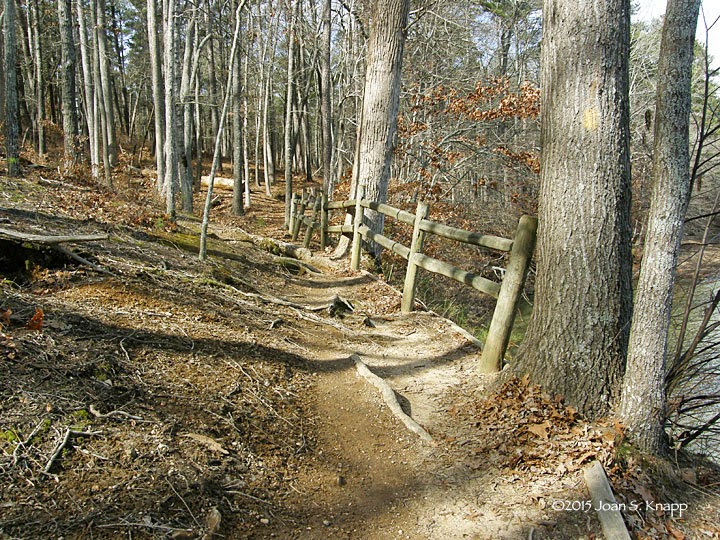 The trail climbs from the bridge. A couple of fences prevent falls from a cliff above the lake. In the warmer weather, I’ve seen large turtles and the occasional water snake swimming in the water below. On the approach to this fence, Pipsissewa/Spotted Wintergreen (Chimaphila maculata) hang on grimly and even bloom. 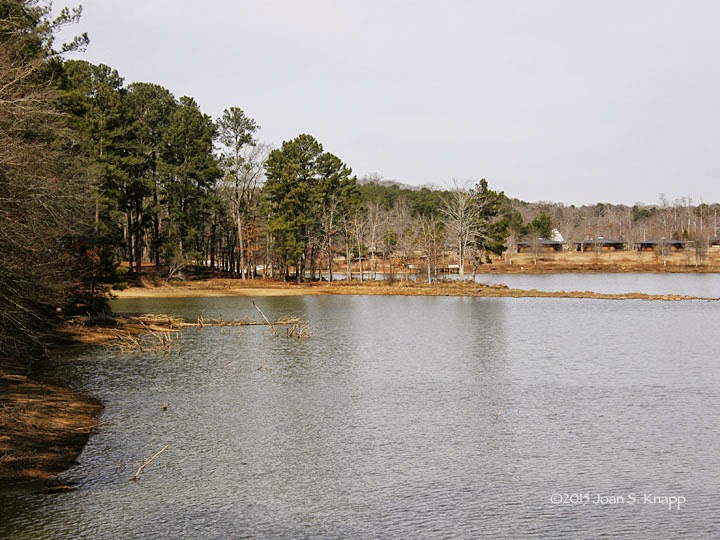 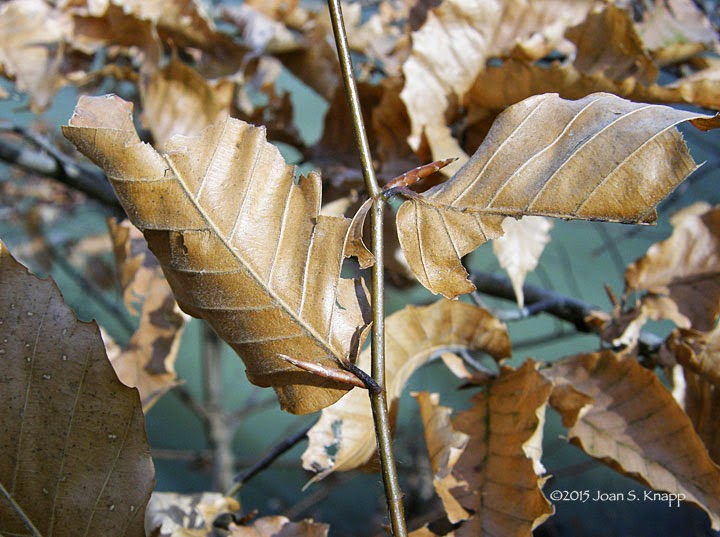 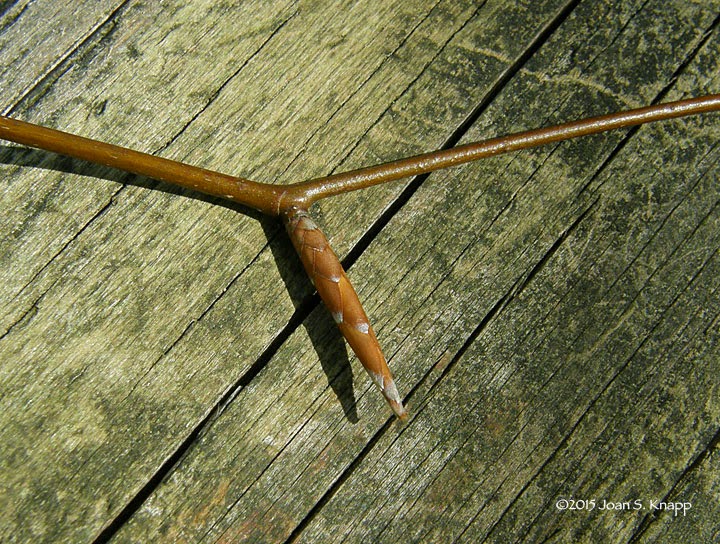 American Beech (Fagus grandiflora) trees grow along the second fence above the cliff. American Beech trees hold on to their leaves in the winter and are easy to recognize at a distance in the woods. These trees have already developed leaf buds. Several wildflowers grow along this section of the walk. Rattlesnake weed (Hieracium venosum), Perfoliate Bellwort, Widowsfrill (Silene stellata) bloom along this short section of the trail. 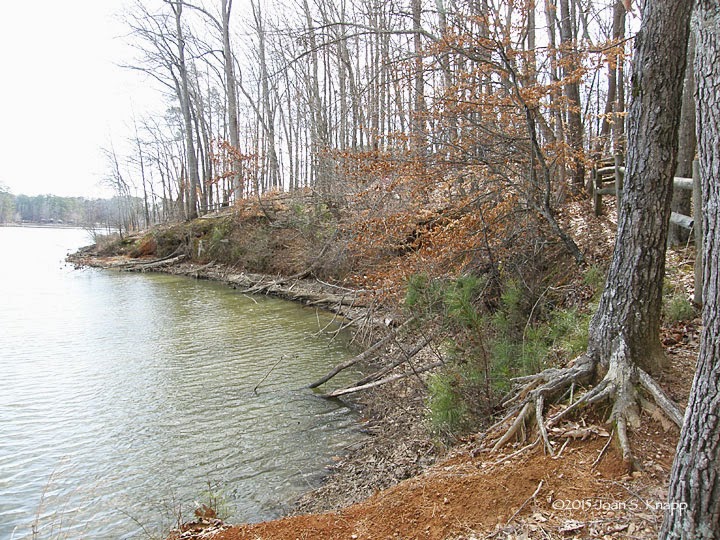 Looking back at the cliff. A pair of Cliff Swallows (Petrochelidon pyrrhonota) nests in a hole at the farther end of the cliff. 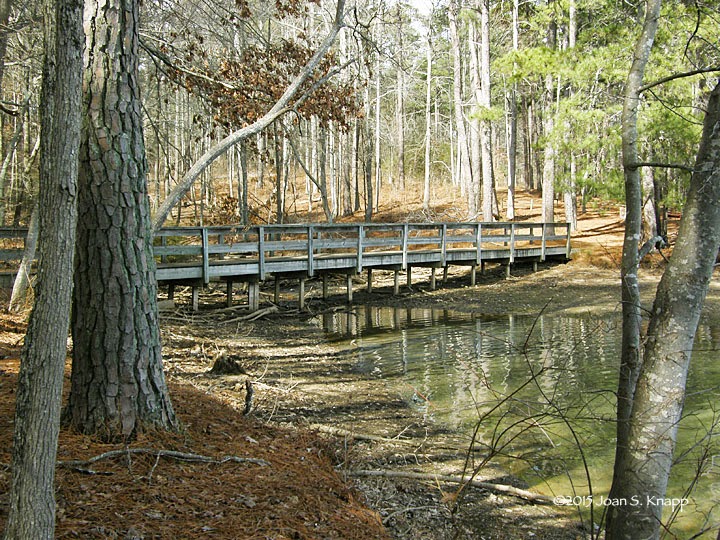 The Fishing Area access road and parking lot lie just past this bridge.

The wildflowers that I’ve mentioned here are those that I remember clearly; there are many more.