September 9th, 2015. I had walked along this trail and stepped over this solitary mushroom several times. 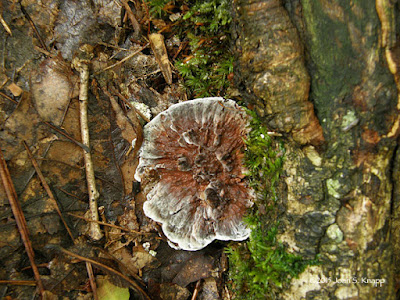 This was a beautiful, solitary specimen but I had been resisting the temptation to get ‘sucked into’ photographing and identifying fungi. So it was at least three weeks old by the time I stopped to examine it. 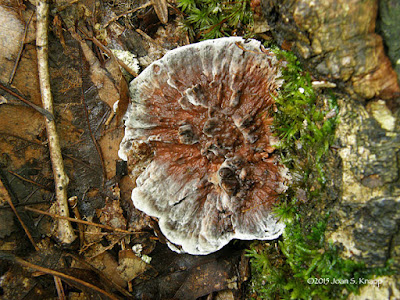 A close view shows just how beautiful it was. Its cap was approximately 2.5 inches in diameter, brick-red in the center and fading to a white margin. Its surface was relatively flat with several tubercles (bumps) in the center. It was growing in the soil against an exposed, deciduous tree – almost certainly an oak - root. Its underside was almost flush with the ground and I couldn’t use a mirror to photograph its underside. I had to remove a portion of the cap to see the underside.

I wasn’t sure what to expect and was delighted when I found that it had teeth instead of gills or pores; this was the first terrestrial toothed mushroom I had ever seen. 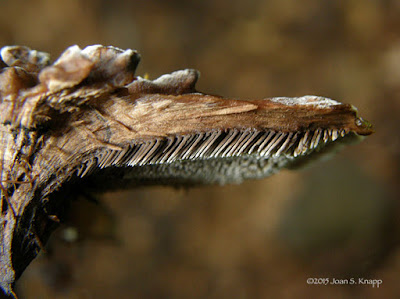 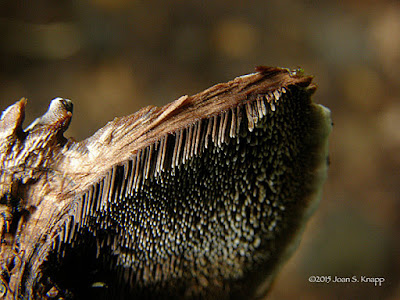 The texture of the mushroom was very tough, like tearing apart layers of plywood. The teeth were distributed evenly over the underside of the cap and slightly down the stem.

This mushroom resembles Hydnellum concrescens, commonly called the Zoned Hydnellum or Zoned Tooth fungus; I'm hoping that this is an accurate identification. The main way this specimen differed from the description for this fungus is that its texture was tougher than the ‘leathery becoming corky’ in most descriptions of this fungus.

A similar species is Hydnellum scrobiculatum (Ridged Tooth fungus( that develops a bumpy/ridged cap and is usually found growing under conifers. I’ve submitted these observations to Mushroom Observer and will be interested to follow activity on the record. And I’ll be back next year in the hope of seeing this mushroom again.