April 2nd, 2014. Continued from Oconee Station Historic Site and Station Cove Falls: Wildflowers (Part 1). We made a short trip over to Devil’s Fork State Park, South Carolina in search of Shortia galacifolia (Oconee Bells, Southern Shortia) and Monotropsis odorata (Pygmy Pipes, Appalachian Pygmy Pipes, Sweet Pinesap). While we were there we made a side trip to Oconee Station Historic Site and the Station Cove Falls. 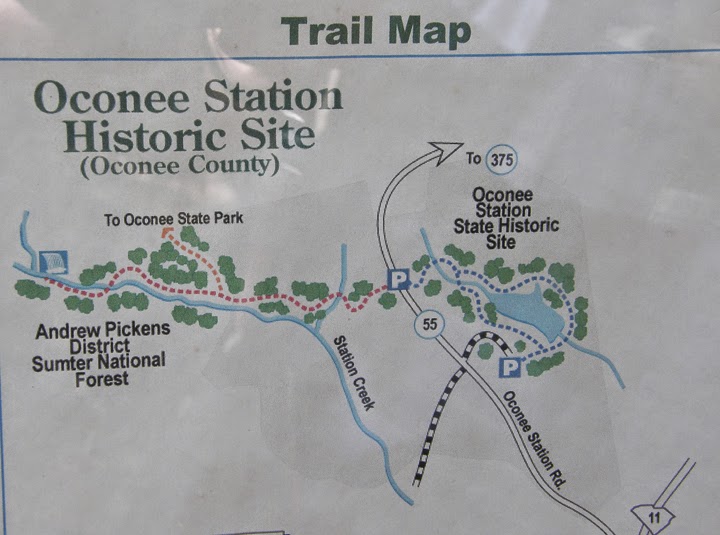 Map of the trails from the Oconee Station Historic Site to the falls. We parked at the historic site and walked down to the pond. The main trail stays on the highway side of the pond and follows the creek up to the highway. Although the map shows a trail around the pond, it is quite primitive. It was late in the day so we decided to hike to the falls the following morning.


The vegetation changed about half-way along the trail. It was moister than the first part of the trail. 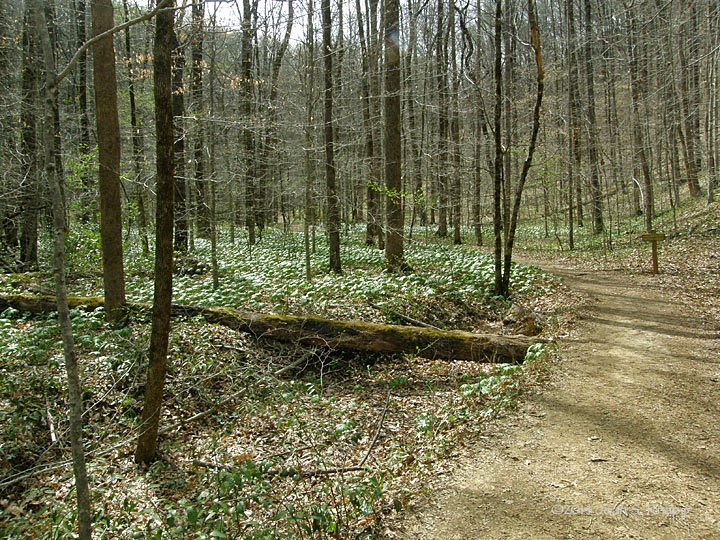 There were several large areas covered with Mayapples (Podophyllum peltatum). 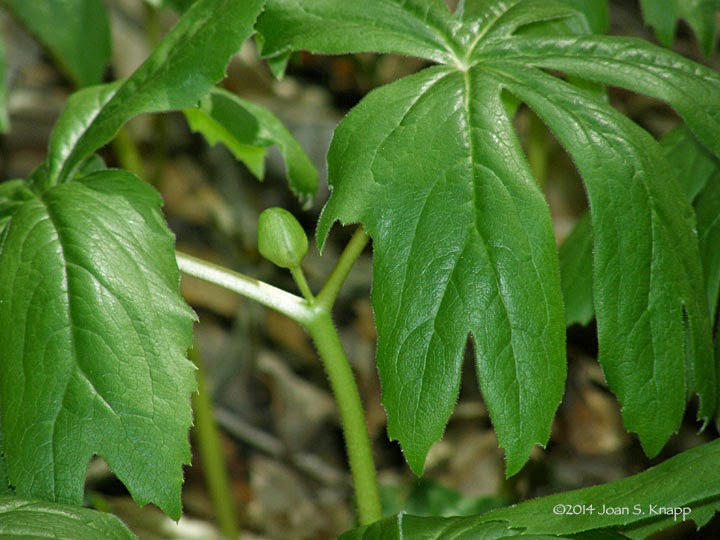 Some had buds that will develop white flowers 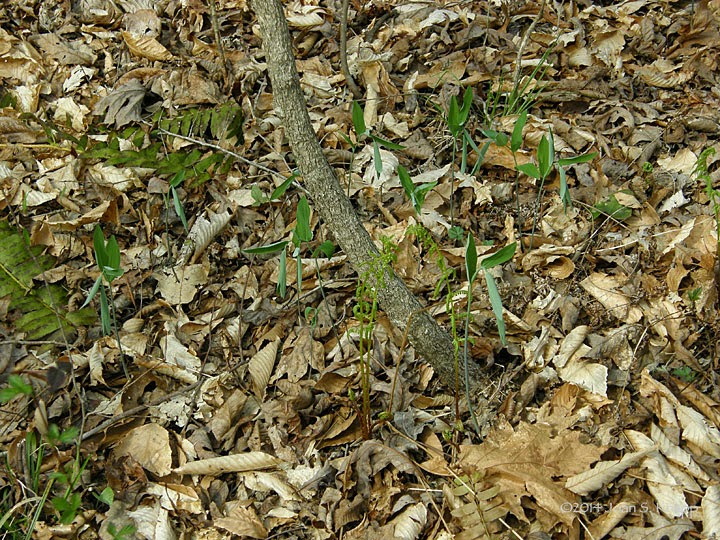 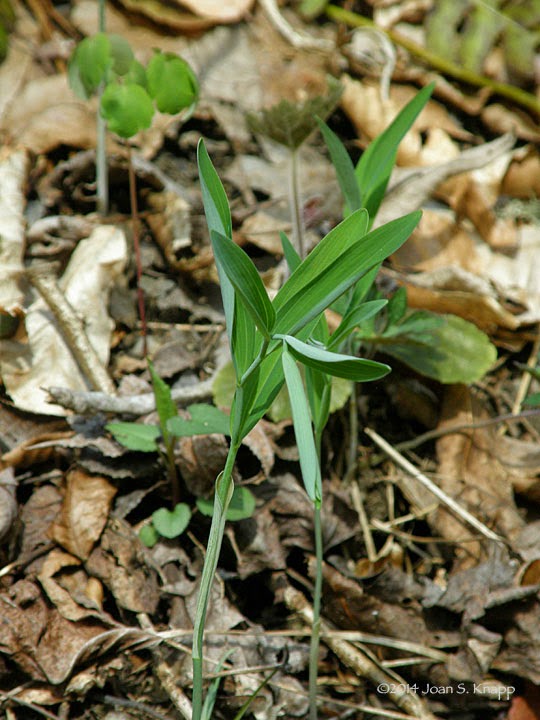 There were clusters of these plants standing by themselves and among the Mayapples. I knew I should know what they were, but it wasn’t until I saw the Perfoliate Bellwort that I realized they were Sessileleaf Bellwort (Uvularia sessilifolia) that will produce flowers like these (photographed by Hugh Nourse). 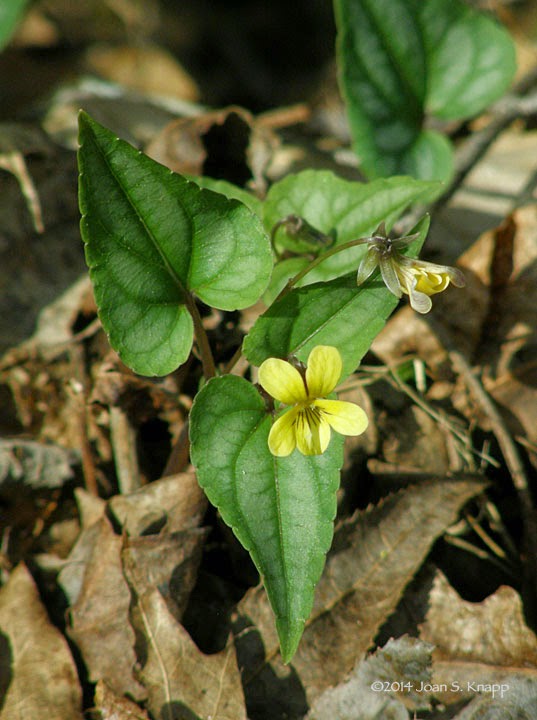 Halberd-leaf Yellow Violets (Viola hastata) were blooming along the bank beside the trail. 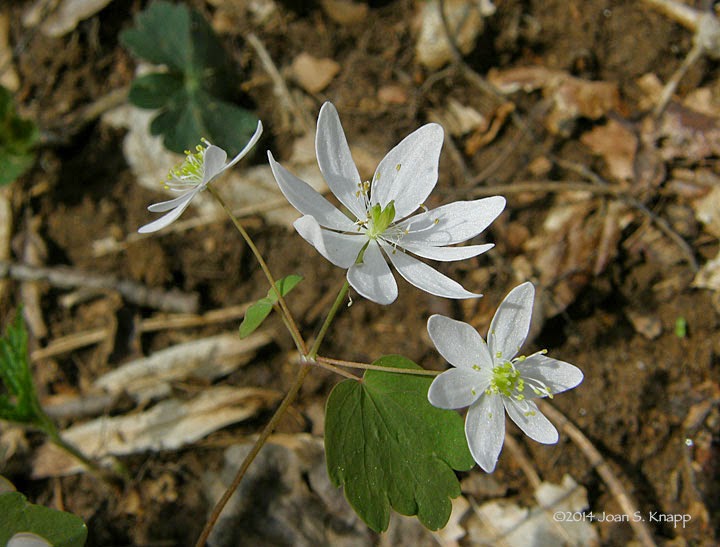 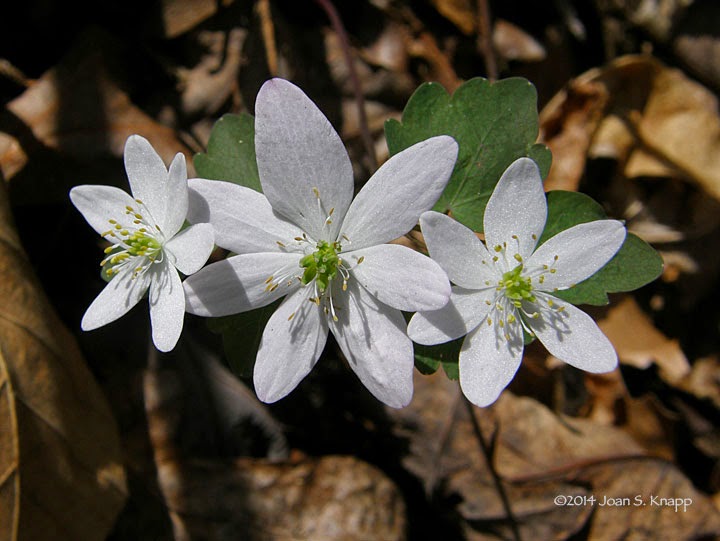 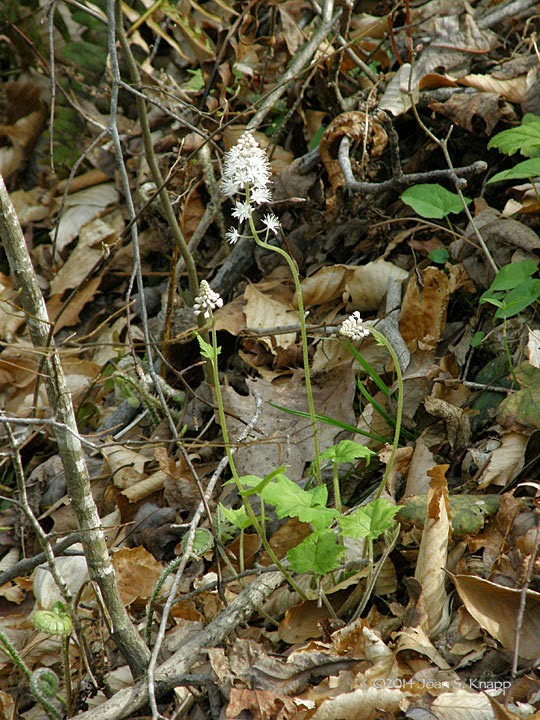 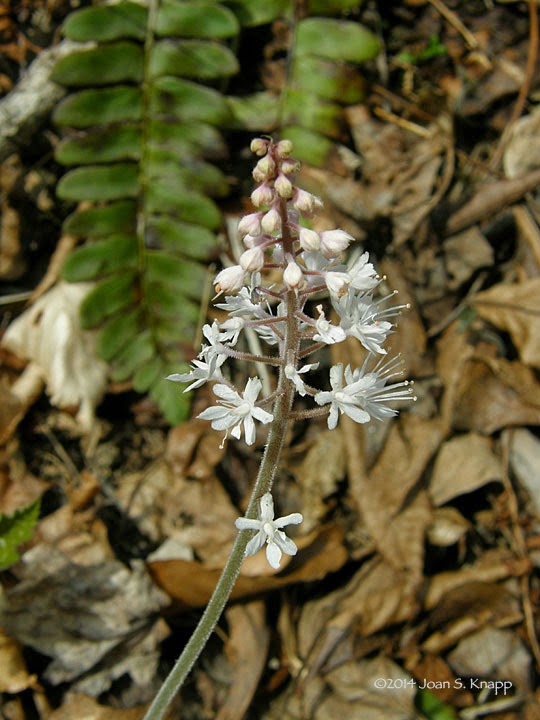 Foamflower (Tiarella cordifolia). Most were still in bud but a couple had opened flowers. 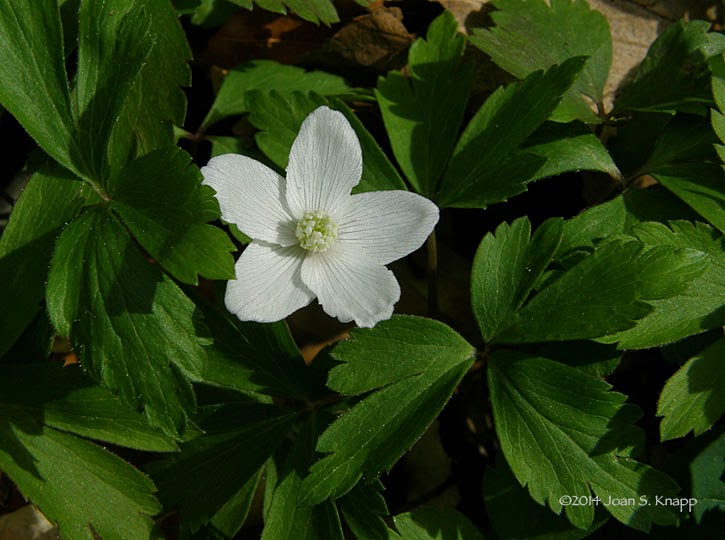 Wood Anemone (Anemone quinquefolia). This was the first Wood Anemone I had seen, and the only one I saw along the trail. 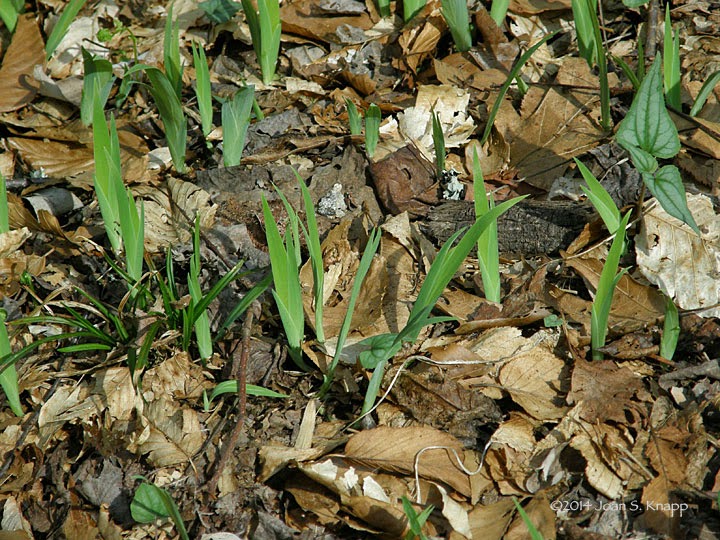 A promise of dwarf iris blooms to come. My guess is the Dwarf Crested Iris (Iris cristata) although they could be the Dwarf Iris (Iris verna). 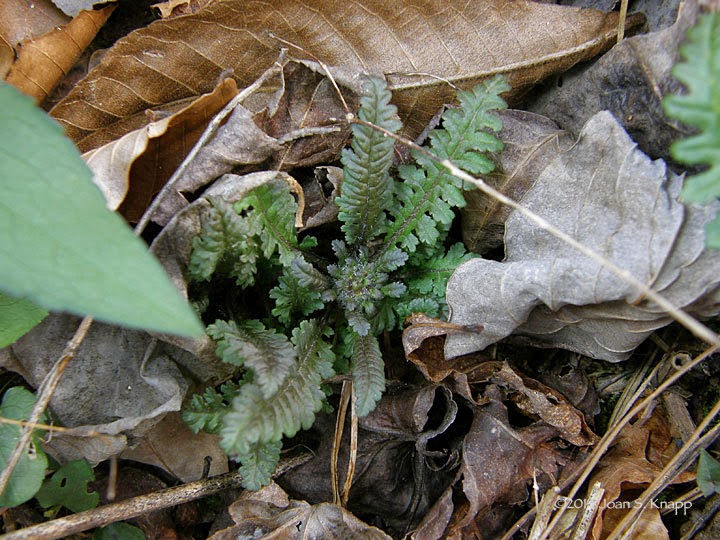 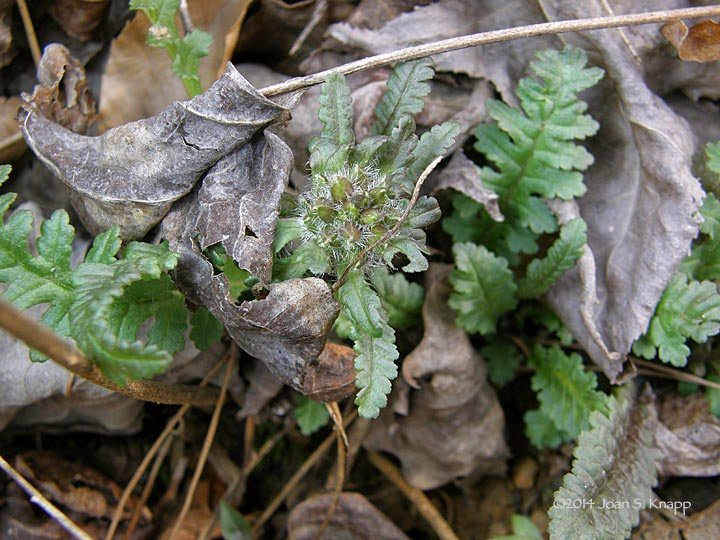 Lousewort (Pedicularis canadensis) were just starting to bud at the very edge of the trail. We saw these in full bloom at Boggs Creek. 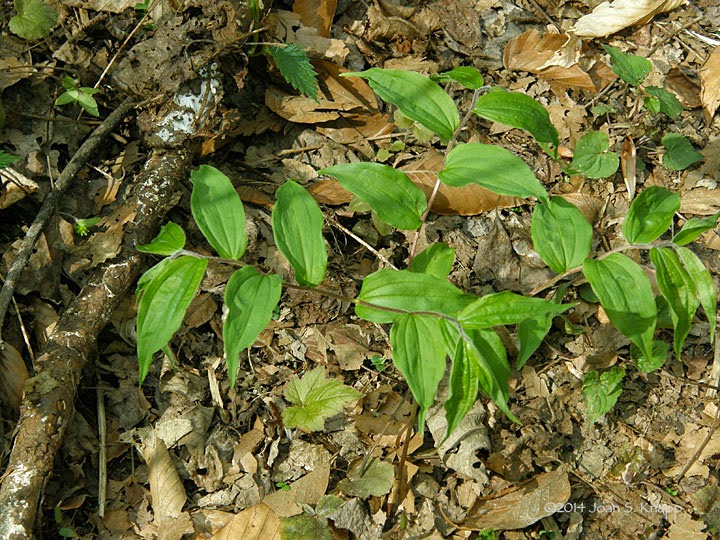 I think this might be Spotted Mandarin (Prosartes maculata) that will produce flowers like these (photographed by Hugh Nourse in North Carolina). Another guess. This plant, and I only found one,  was growing quite near to the crossing to the final approach to Station Falls. It’s not been officially documented in South Carolina but occurs in surrounding states. 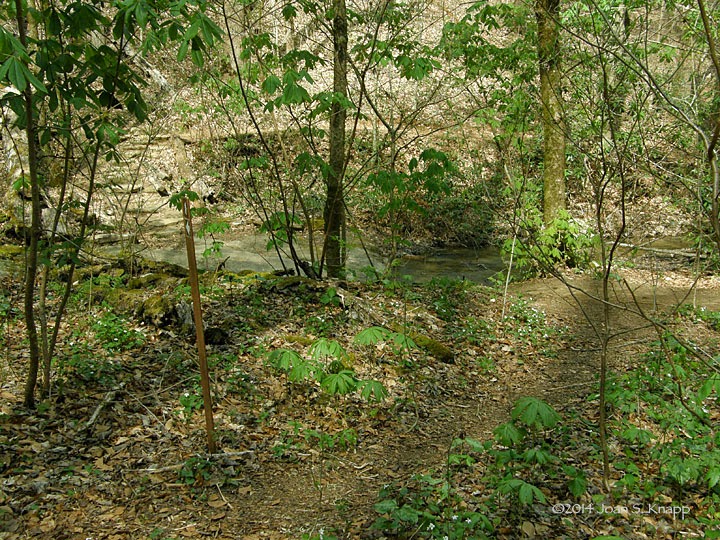 On the final approach to Station Cove Falls looking back to the crossing over Station Creek. The vegetation here was different from the drier areas along the trail on the other side of the creek. There were Mayapples which we had seen earlier on the trail but then several plants that appeared to be unique here. 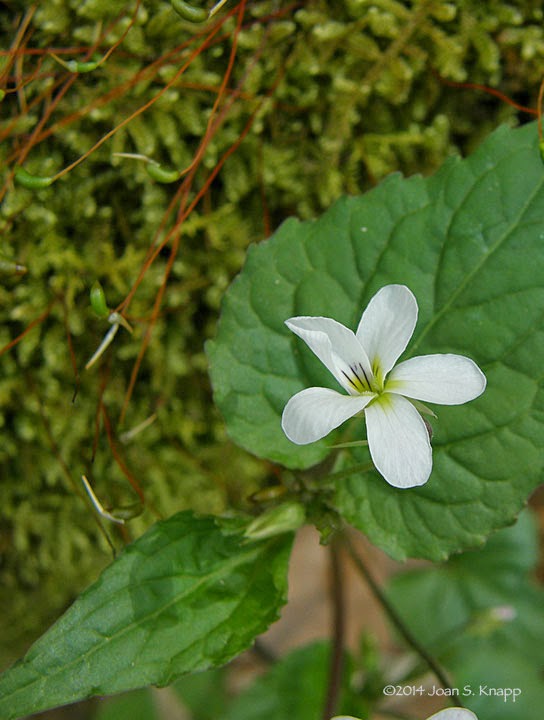 Canadian white violet (Viola canadensis). Some are visible in the photo above but they carpeted the area to the left of the trail moving towards the falls. 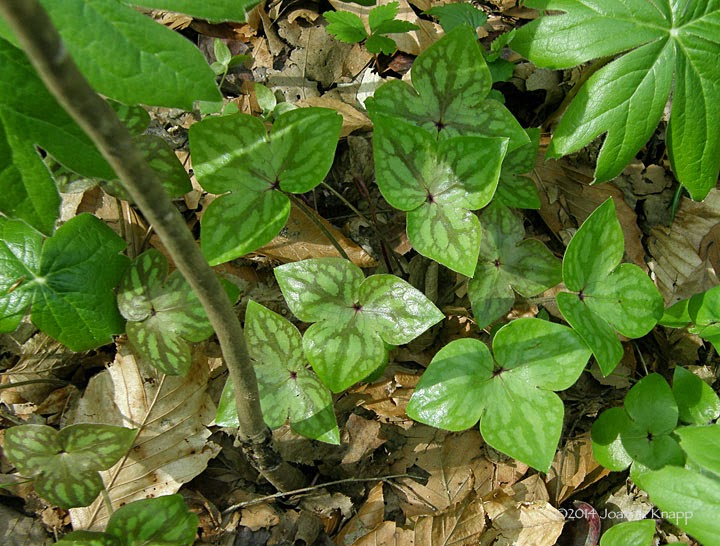 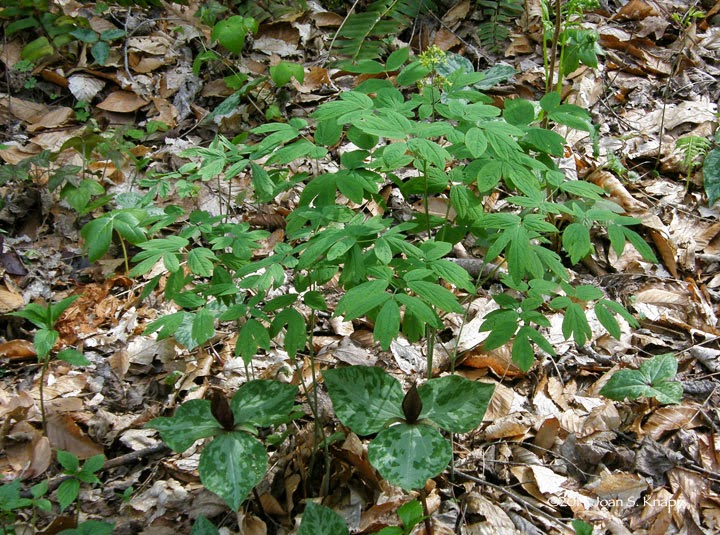 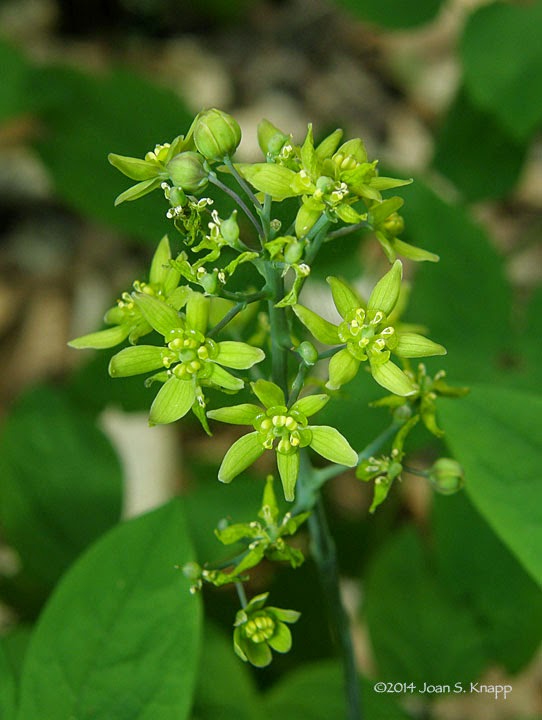 Blue Cohosh (Caulophyllum thalictroides). The final gem on the trail was a single Blue Cohosh, and in bloom.

This is a rich botanical area for Spring wildflowers that would require several trips at different times to fully appreciate the variety of flowers that could be viewed.