April 2nd, 2014. We made a short trip over to Devil’s Fork State Park, South Carolina in search of Shortia galacifolia (Oconee Bells, Southern Shortia) and Monotropsis odorata (Pygmy Pipes, Appalachian Pygmy Pipes, Sweet Pinesap). While we were there we made a side trip to Oconee Station Historic Site and the Station Cove Falls. 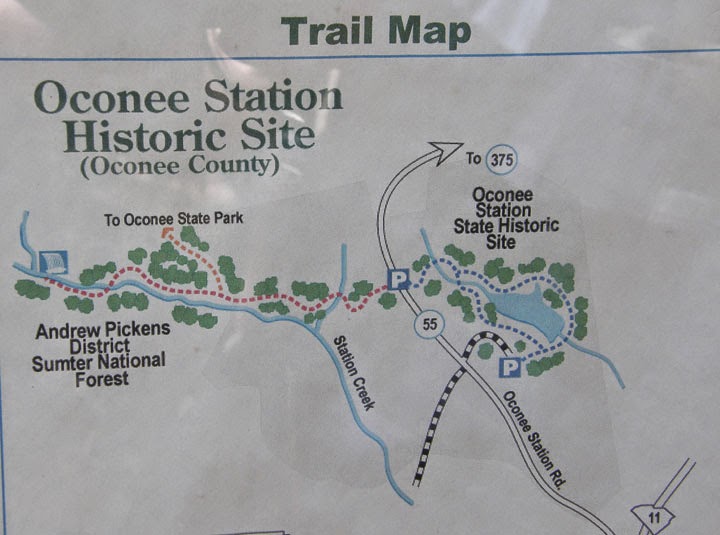 Map of the trails from the Oconee Station Historic Site to the falls. 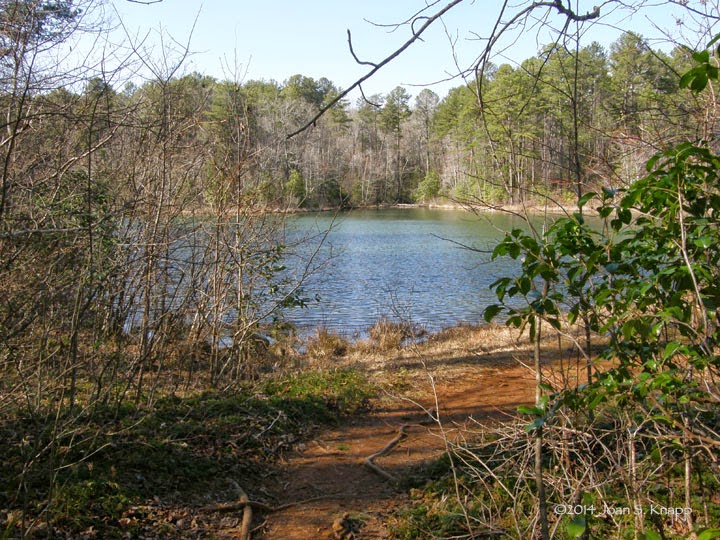 We parked at the historic site and walked down to the pond. The main trail stays on the highway side of the pond and follows the creek up to the highway. Although the map shows a trail around the pond, it is quite primitive. It was late in the day so we decided to hike to the falls the following morning. 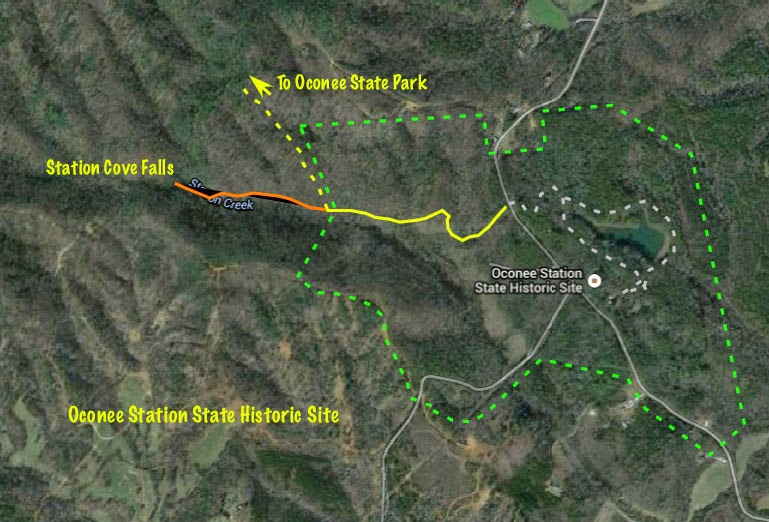 We parked on the highway where the trail crosses the road. The main trail connects the historic site to Oconee State Park which is about 3-1/2 miles from the highway.

The trail is intended for hiking and mountain biking. It’s wide and easy hiking. Logs have been embedded in some short sections to stabilize the trail where puddles would form after rain. The trail initially descends from the highway and then follows a contour along the hillside until it crosses the valley along the creek, periodically crossing tributaries to the creek. 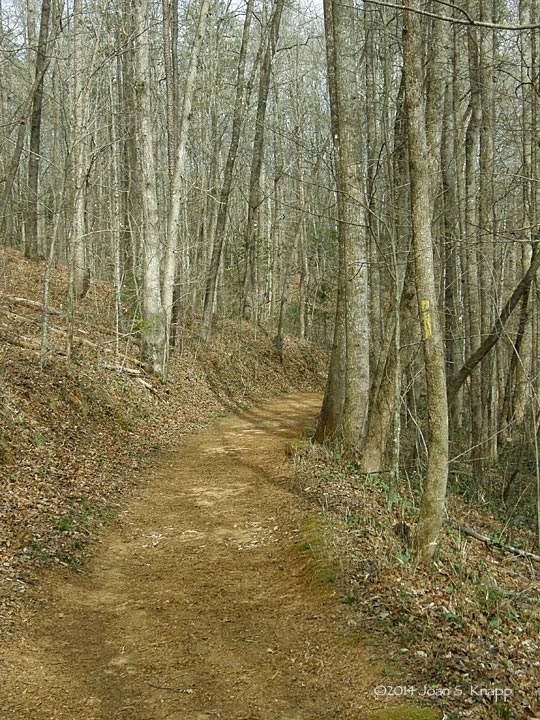 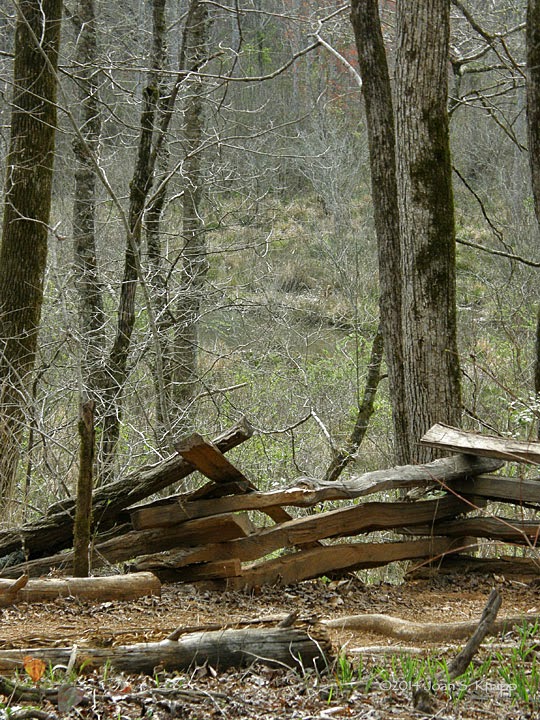 An overlook of a swampy section of Station Creek. Many American Toads (Anaxyrus americanus) were calling. 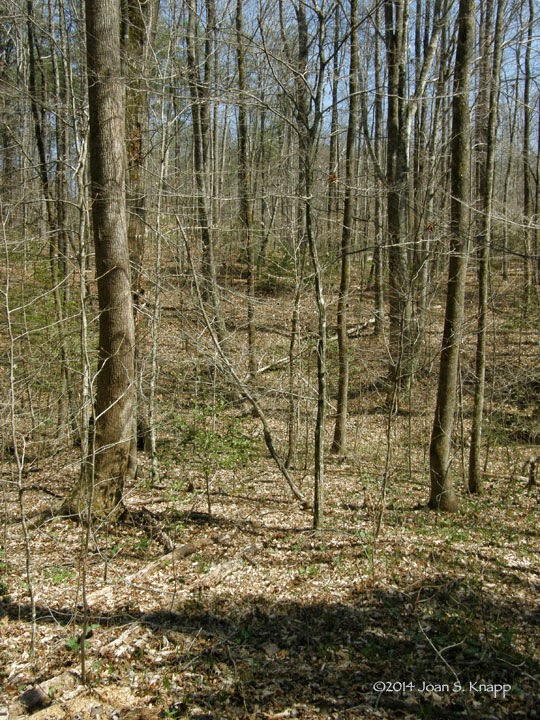 The trail passes through a deciduous forest which was very open in early April; it will be much more shaded when the trees leaf out. 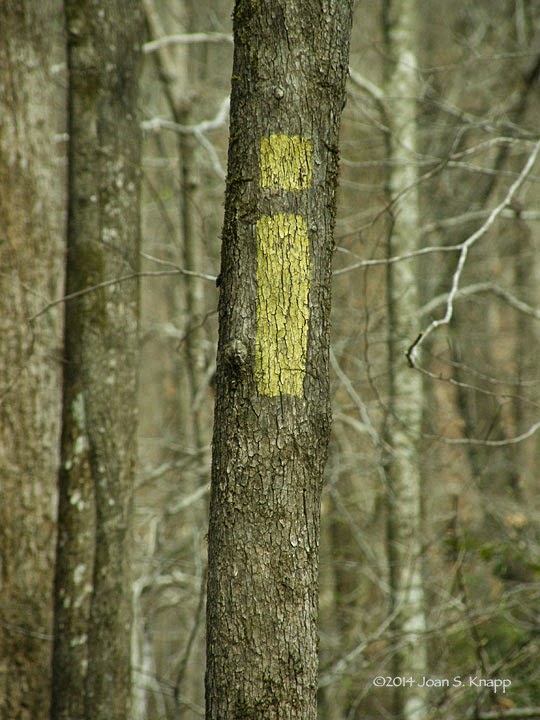 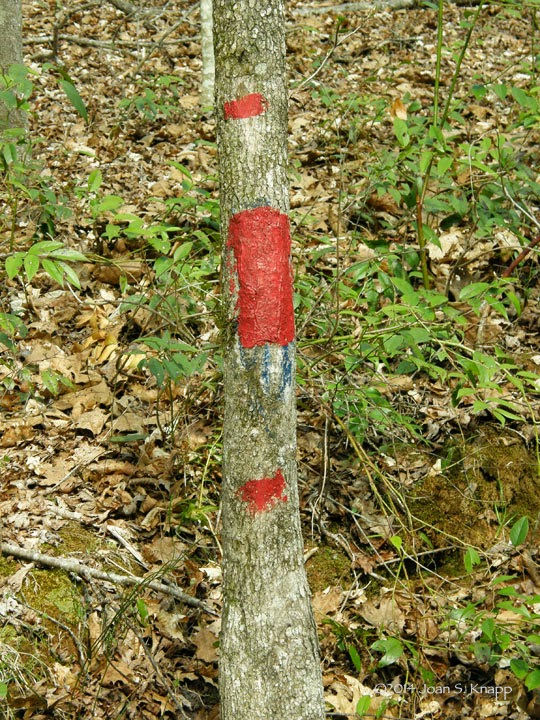 The trail to the falls leaves the main trail just after it leaves the historic site property and enters the Sumter National Forest, marked by the red blaze on a nearby tree. 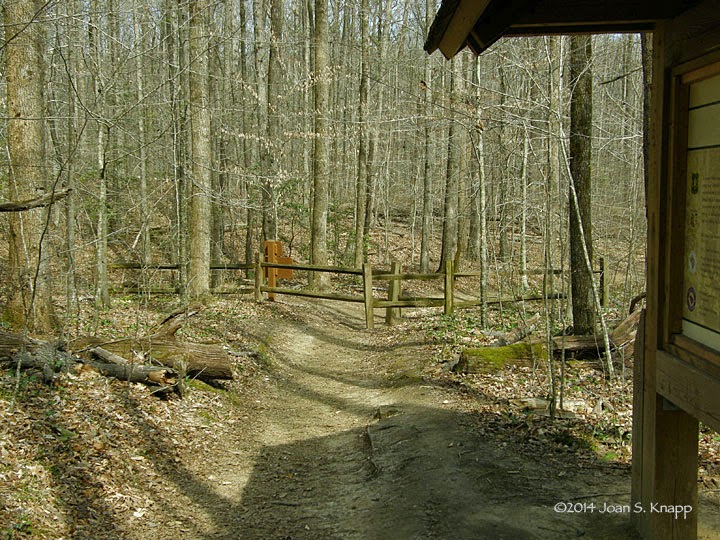 Looking back to the ‘entrance’ to the Station Cove Falls trail. This trail is not opened to mountain biking. 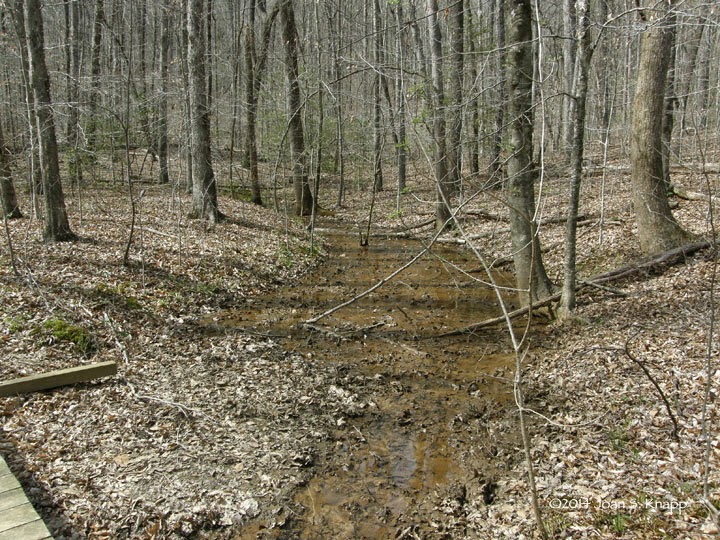 Looking upstream along one of the larger tributaries to Station Creek. 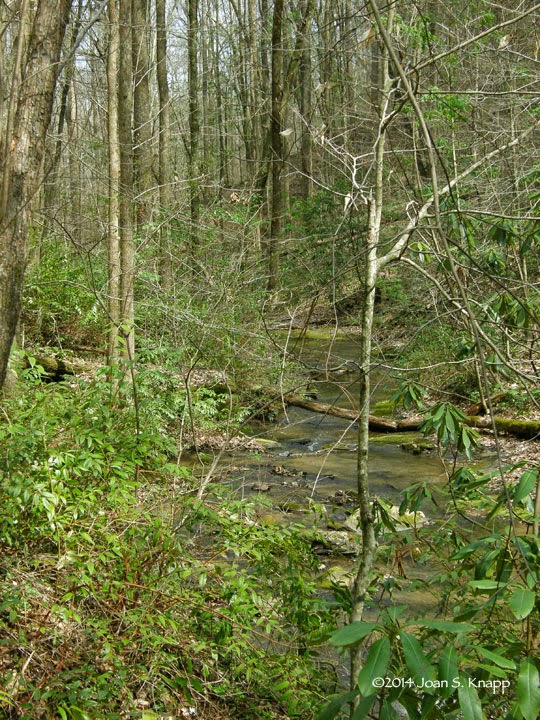 Station Creek not far below the falls. 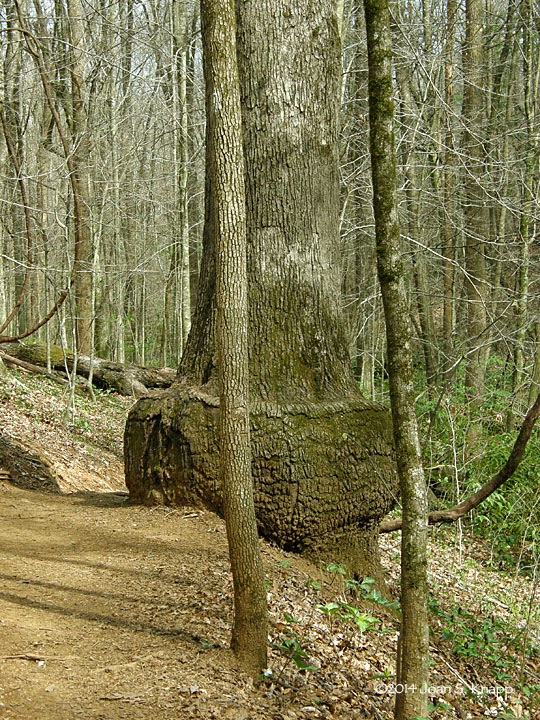 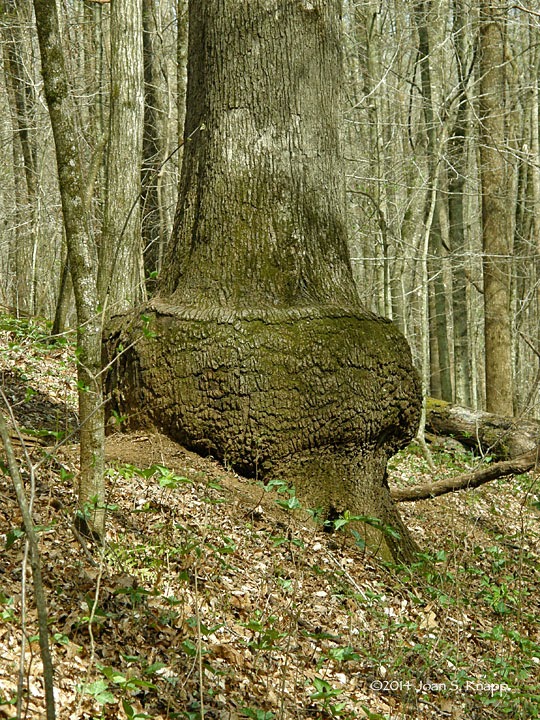 An impressive gall on a tall tree along the trail not far from the falls. 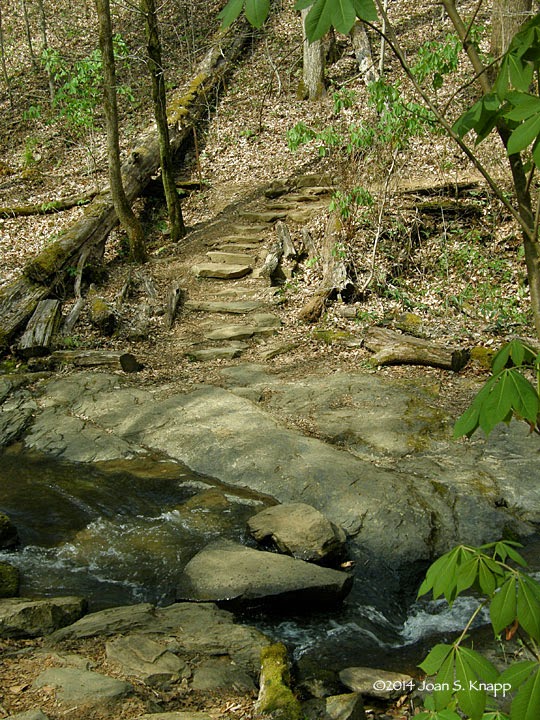 Looking back, just after descending to, and crossing Station Creek on the final approach to the falls. 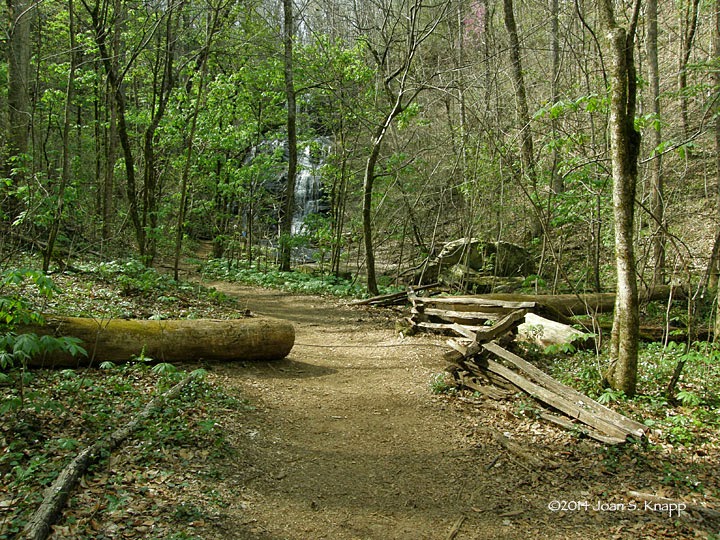 The trail on the final approach to the falls 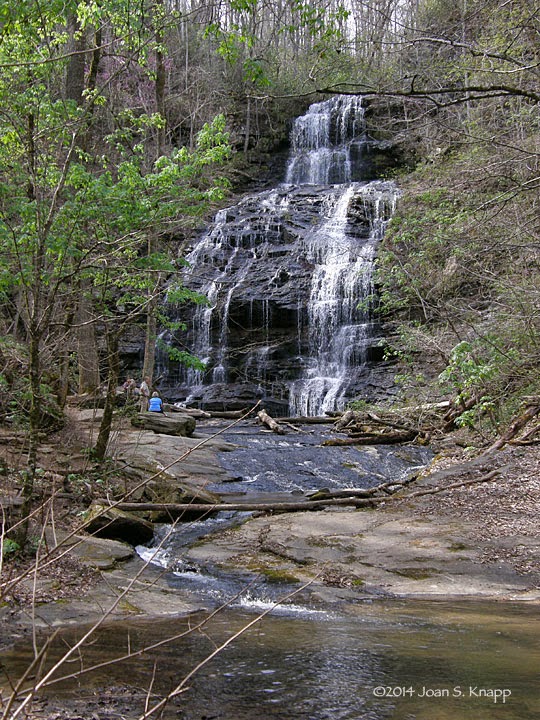 Station Cove Falls. The falls are about 60 feet high.

This is a relatively easy hike approximately 1 mile in length from the highway and worth the effort for the scenery and for the Spring wildflowers (to follow).