March 10th. I went over to the Oconee Heritage Park off US-441 south of Bishop, Georgia, to look for early wildflowers that I’d seen last year. I decided to look for fungi in the woods along the way. 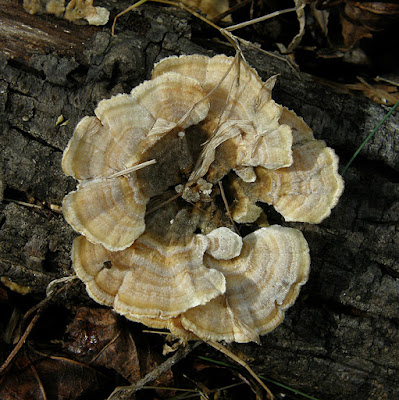 I noticed a log with some small, cream-colored bracket fungi that resembled the almost ubiquitous Turkey Tails (Trametes versicolor). These brackets were the same size as T. versicolor, about 1.4 inches across, and ‘paper-thin.’ They were growing in overlapping clusters on the side of, or in rosettes on top of the log. They were a little unusual in being so light colored. I almost dismissed them as being T. versicolor but they were pretty and I stopped to photograph them. 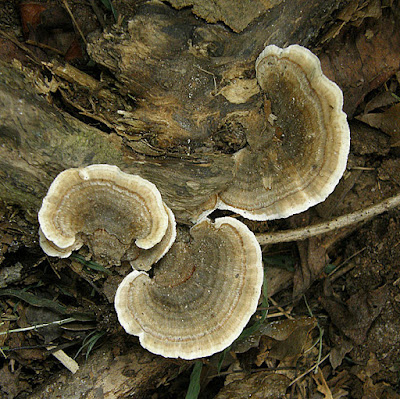 T. versicolor brackets that I had found at home some years ago. Turkey Tails are identified by the fact that they have distinct zones of color on their caps, and… 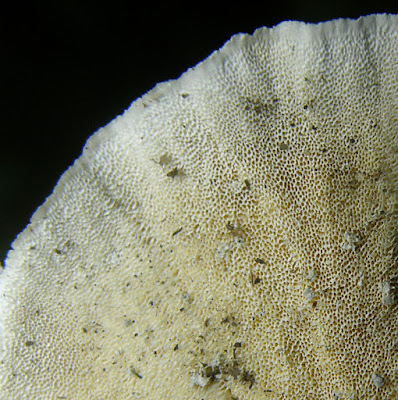 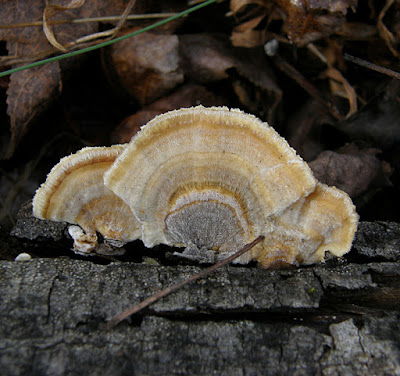 I took a photo of a cluster on the side of the log, and a… 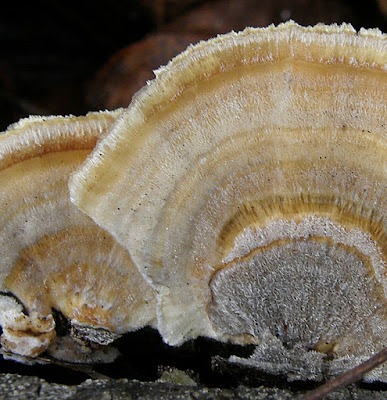 closeup of one of them, that showed the finely hairy surface characteristic of these small Trametes sp.

I almost left without photographing the undersides of one of the brackets. In the bright sunlight, I couldn’t really see the detail on the undersides. In fact, it was so bright, that I depended on the camera to focus on the pores without my being able to see them clearly. I didn’t see the pore structure detail until I got home and was processing the images. 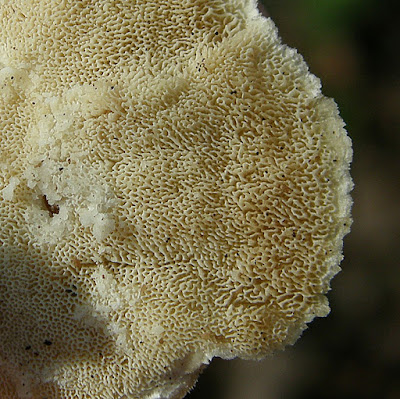 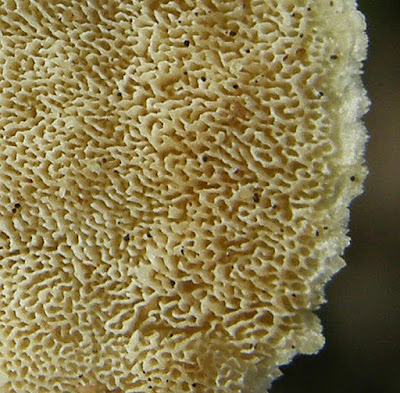 I was very surprised, and excited, when I found that they had maze-like pores rather than the near circular pores of T. versicolor. This was the first time that I had found a Trametes sp. like this. It was one of the Turkey Tail ‘look-alikes.’

Two Trametes sp., T. villosa and T. pubescens, were suspects. Both are light-colored, without the stronger color zones characteristic of T. versicolor. T. pubescens appear to be sturdy brackets – up to 2.5 inches across and 0.5 inches thick – with angular pores (3-5/mm). T. villosa are described as up to 2.5 inches across, but only a few mm thick, and with pores that elongate as they age.

I have concluded that the brackets I found are T. villosa. This was an exciting find; this species is not reported frequently. I was lucky to find it. And I guess the moral of the find is, always to look at anything slightly out of the usual, and always look, and photograph, the undersides.