March 11th, 2014. We installed a couple of log feeders in mid-December, 2013. Our inspiration came from a log feeder at the Ontario FeederWatch Cam sponsored by the Cornell Lab of Ornithology that was visited regularly by a Pileated Woodpecker (Dryocopus pileatus).
Within a day or so of installation, Downy Woodpeckers (Picoides pubescens) began to feed at these logs and, within a few days, other birds began to investigate the logs.

As with the Hermit Thrush, I was delighted when I spotted a Ruby-crowned Kinglet (Regulus calendula). I didn’t expect to see a kinglet at all. 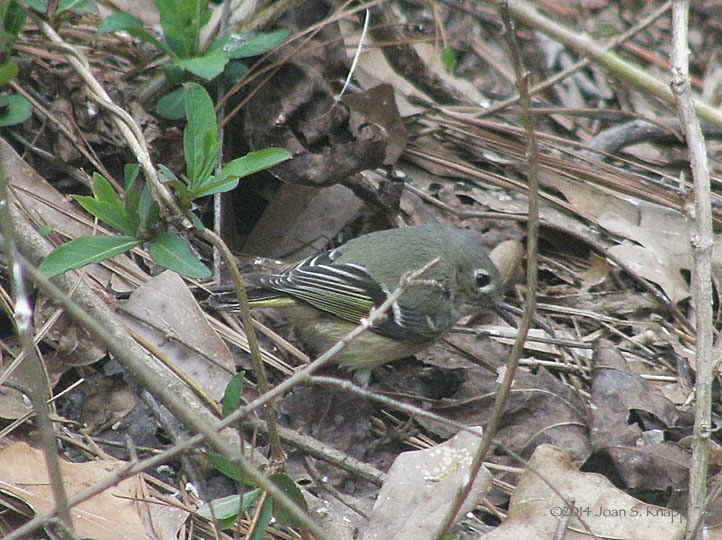 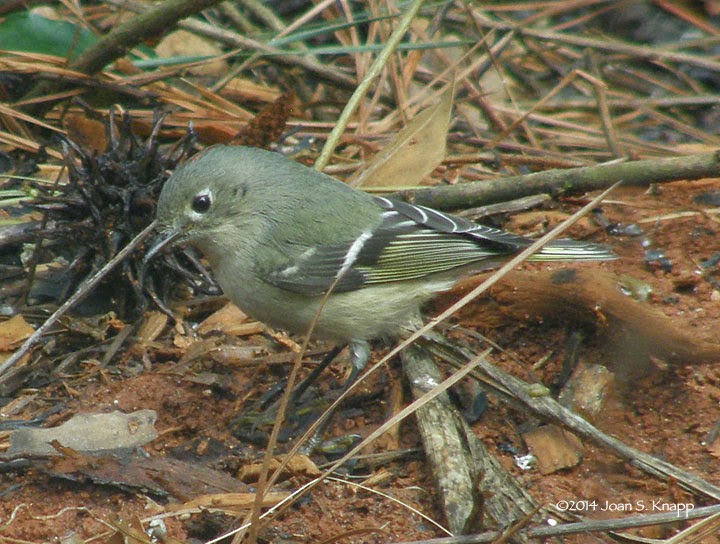 When I first noticed it, it was foraging around in the leaves near the feeders… 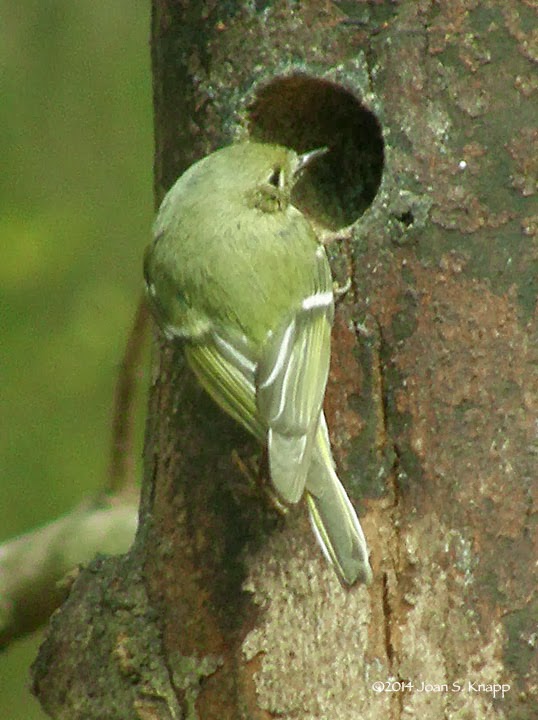 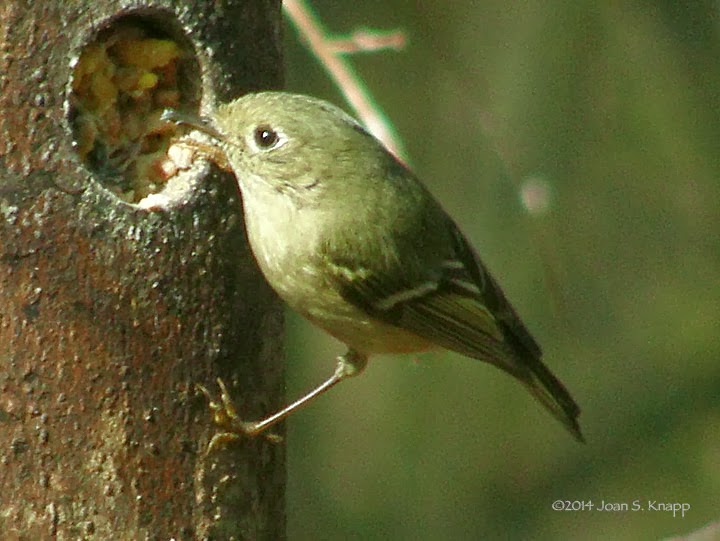 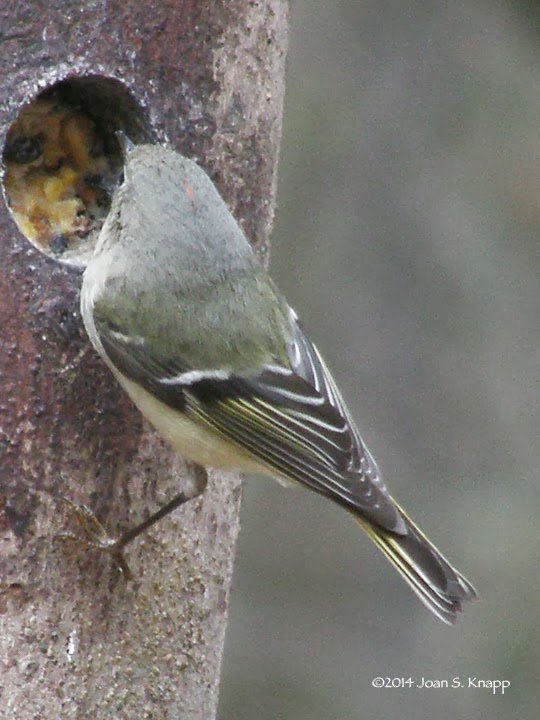 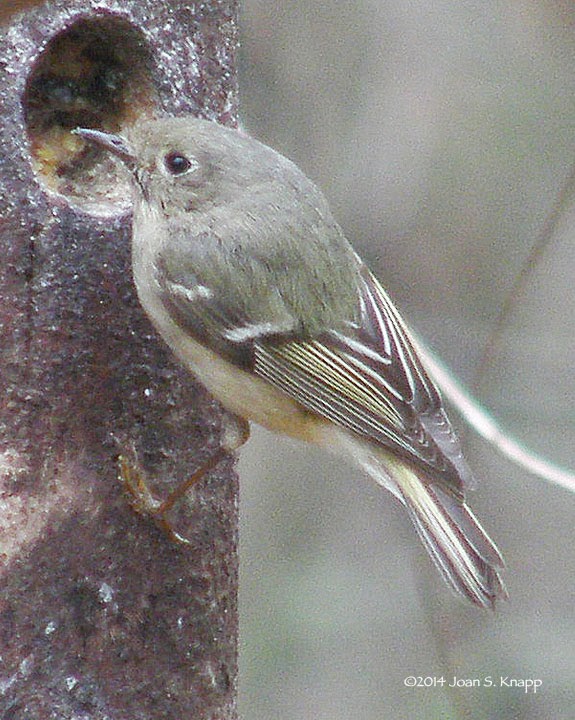 but then noticed that it was also spending time at the log feeders. Sometimes it can perch and feed. At other times… 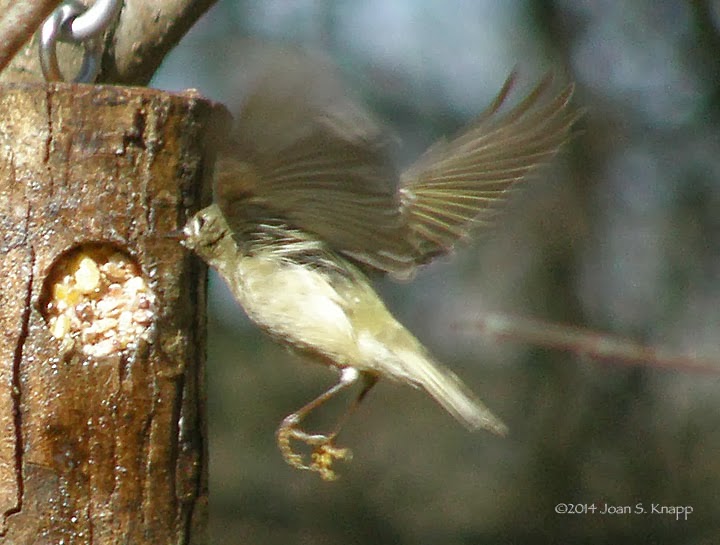 it hovers and grabs a mouthful ‘to go.’ Then… 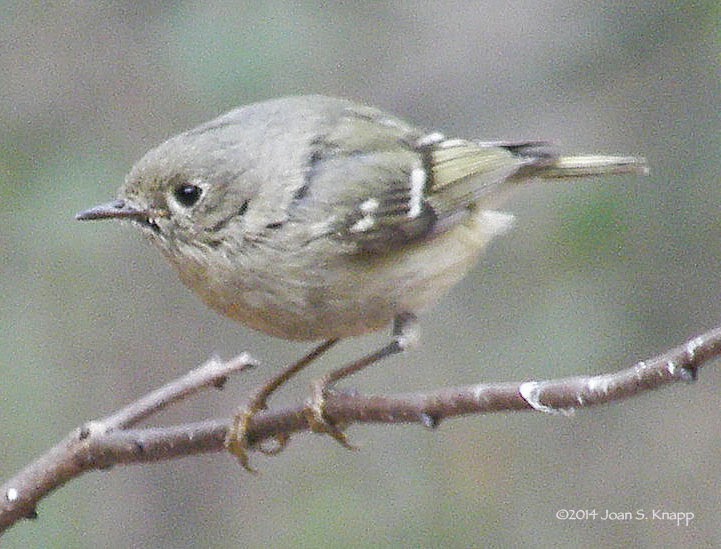 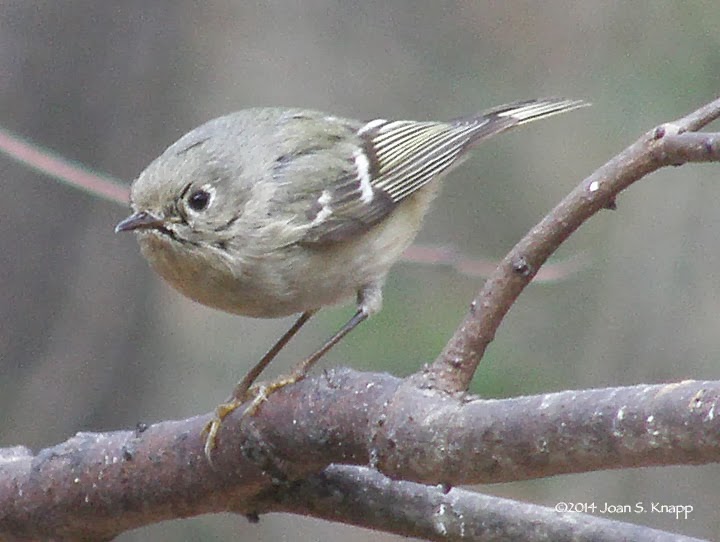 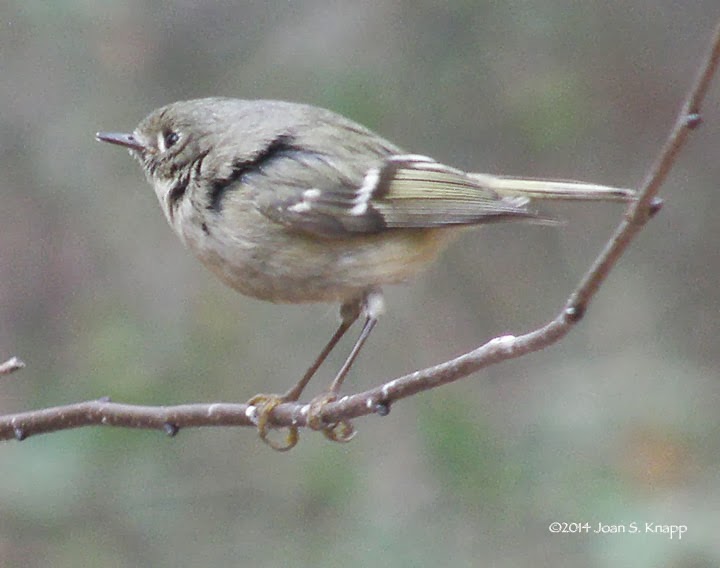 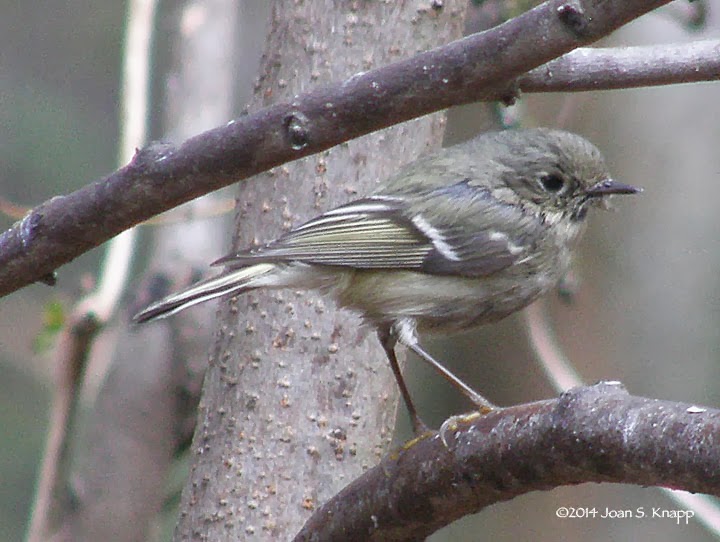 it flies to a nearby branch to eat. 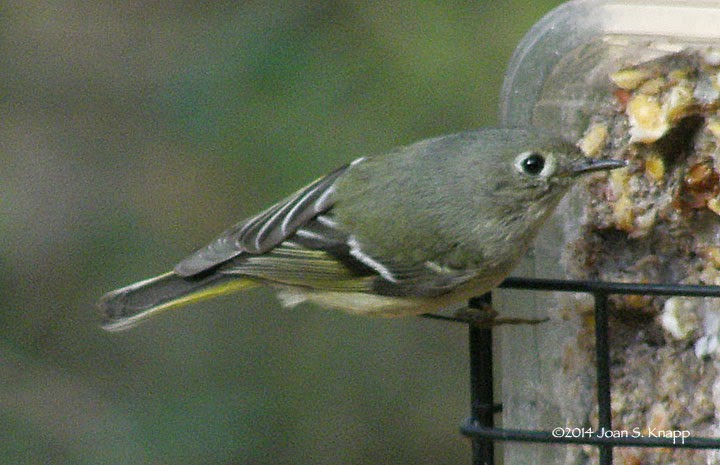 Occasionally, it will feed at a suet cake attached to the platform feeder. 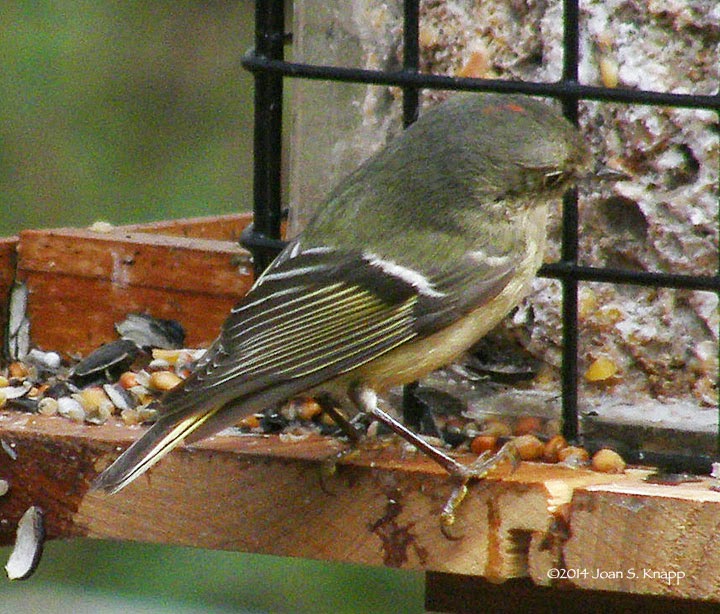 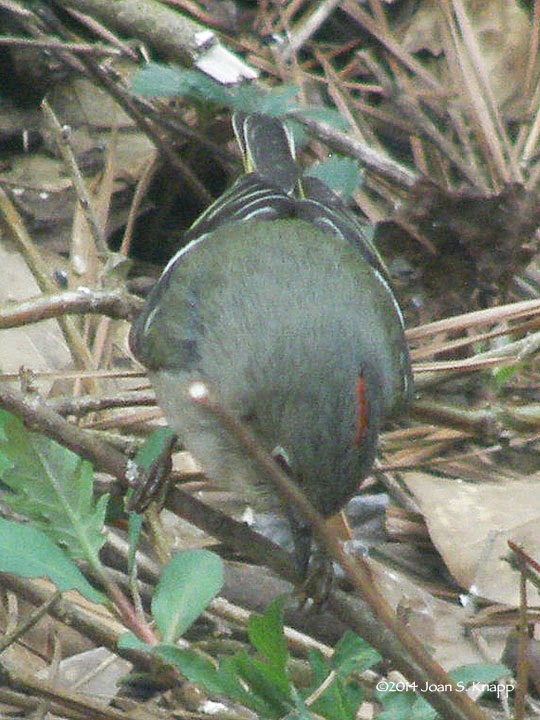 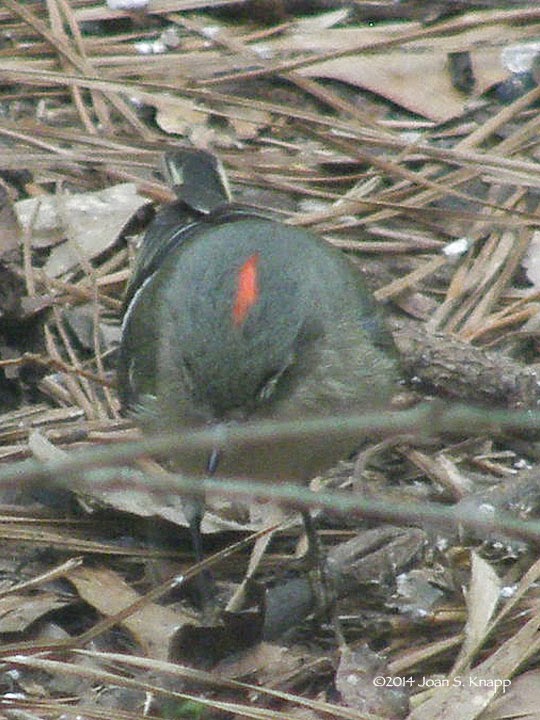 I wasn’t convinced that it was a kinglet until I’d seen its red crest. Mostly, I've only seen the crest fully extended just after a kinglet has landed. I’ve only been able to photograph the ‘remnant’ of the red crest is retracted soon after it has landed.

The kinglet is hard to photograph. It flits from branch to branch continuously. It visits the log feeders repeatedly from early morning to late afternoon. Although it spent some time foraging near the feeders during the cold weather, it is spending most of its time at the log feeders now.