Time to get back to the blog, sadly neglected for a couple of months. Too much time on the internet, but learning new things, and more about old friends.

March 3rd. The Serviceberry tree is one of the earliest to bloom at the lake. The first time I saw it, I was rowing and was surprised to see clusters of white flowers on a tree on the lakeshore. I was able to find a low branch with flowers, and identify it. Since then, I always keep an eye out for them.

This tree, approximately 25 feet tall, was growing right on the lakeshore. I wasn’t sure that I could reach flowers to photograph. That’s where my snake hook comes in handy. I was able to hook a lower branch and carefully pull it down to eye height. 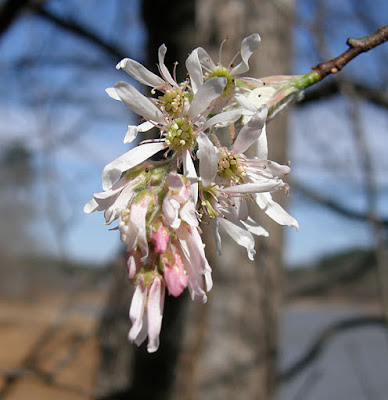 Only one of the flowers was open; most were still at the bud stage.

I didn’t have much hope that I’d find opened flowers on March 8th when I passed this site again. I was lucky. I found that there were several young tress, about 7-8 feet tall, growing around the taller tree. These had flowers too, and I was able to find… 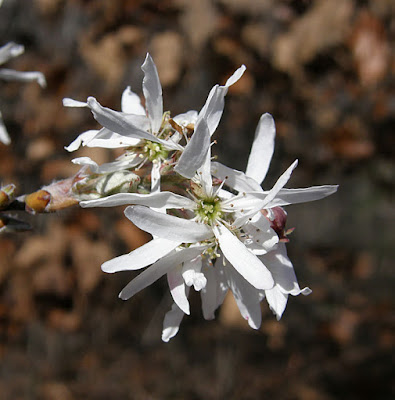 clusters (racemes) with most of the flowers opened.

‘Locals’ have an explanation for the common name, Serviceberry. During the winter, mountain roads would often be in such poor condition and the weather so cold and inclement, that circuit-riding preachers would suspend church services for several months. Since the ground was hard, graves could also not be dug, The blooming of the Serviceberry indicated that the ground had thawed sufficiently for graves to be dug, and burial services conducted. Since the name was applied to English and New World trees in the 16th century, the local etymology is unlikely, although it would have been practical.