Musk Turtles On The Move

It was the most amazing thing. We’d been walking back and forth along the bridge photographing the mussels moving around. W called me to ‘come and look.’ It was just before 4:30 p.m. (EDT). There, lifting out of the mud, was a turtle. It had been sitting on top of the mud, covered in a layer of mud and totally invisible as we were watching the mussels. Soon after – over the next half hour - another and another and another turtle lifted out of the mud. In the end I think we saw six or more turtles. And I got the impression that you could set your watch by them 'coming to life.' This was a treat that we wouldn't have seen if that lake level hadn't been lowered and we hadn't been watching mussels moving around. 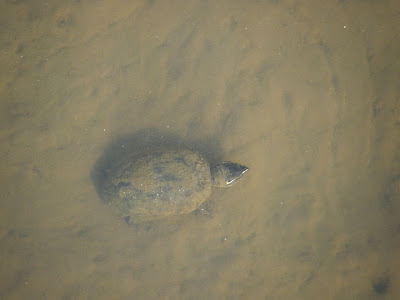 This was the first turtle. It had just lifted out of the mud. 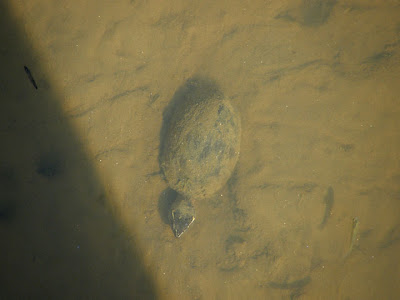 Off it went towards the shadow of a bridge piling. 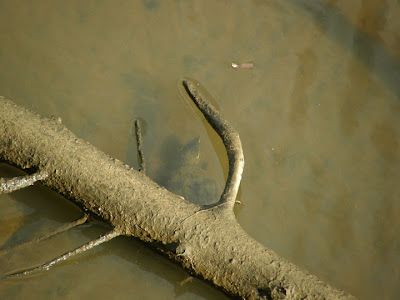 It made its way along the shadow towards the bridge and settled in under a fallen tree trunk. 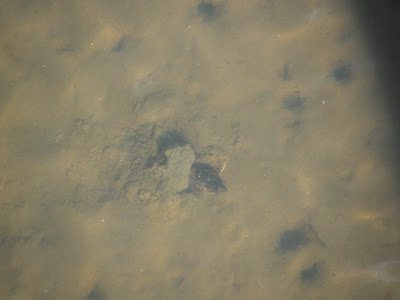 This turtle, a smaller turtle, was more circumspect in getting down to business. At first, only its head was clearly visible. 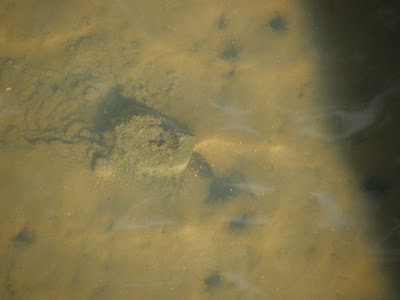 Then it was out and on its way, a layer of mud still on its shell. It was moving at quite a pace. There were little plumes of mud suspended in the water behind it as it moved along. 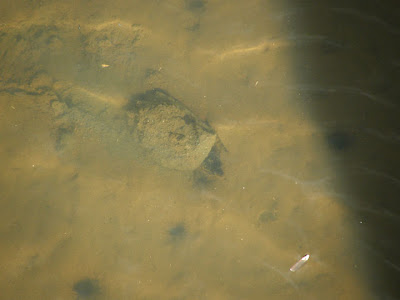 Still heading towards the shadow cast by the bridge piling. 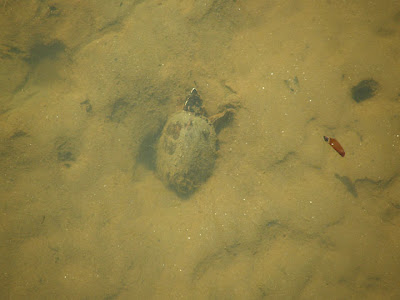 This turtle had only a thin layer of mud on its shell. 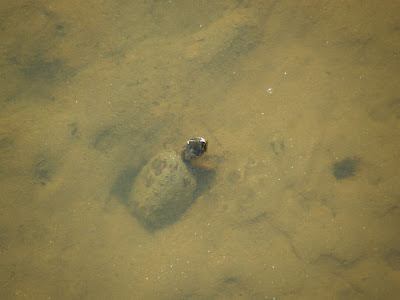 Head up out of the water to take a look around. 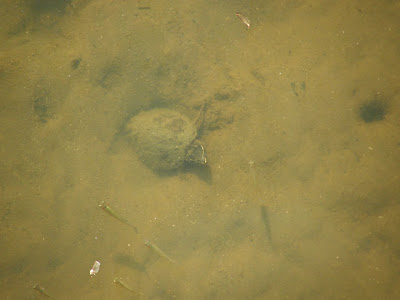 Deciding which way to head off. 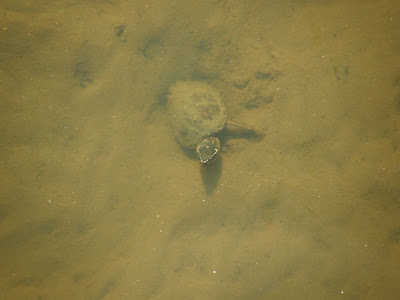 Off to the right today? 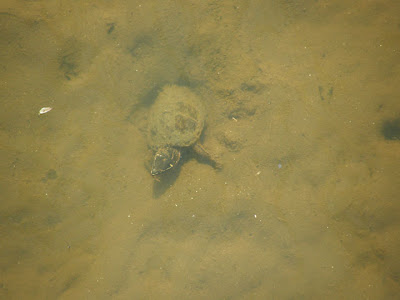 Yep, definitely off to the right. 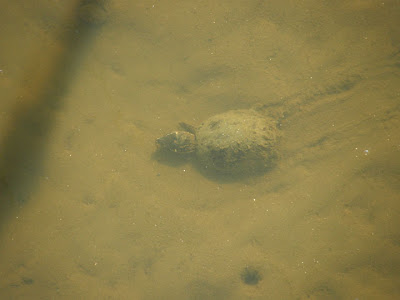 And off we go…

Based on the shape of the head – triangular with a white stripe along the head from the nose towards the neck - I think these are Common Musk Turtles (Sternotherus odoratus). Unfortunately they wouldn’t flip and swim on their backs so that I could see their plastrons and the bottom is much too muddy and soft to even think about trying to wade in to catch one. It was interesting that a couple of them appeared to be longer than the descriptions of musk turtles as a maximum length of about 5 inches.
Click on an image to view a larger image

Hey, that's pretty neat to have seen all of those turtles rise from the mud. If it was 4pm, I'm guessing it had become warm enough for them to venture out?

It was really neat and probably a once-in-a-lifetime observation. I only saw it because the lake level was being lowered and they were covered by only a few inches of water. I'd been watching the moluscs and was about to give up for the day. My husband had turned up at the lake and I'd dragged him down to watch them. He was the one who saw the turtles start to rise and we just watched them. It was a cool day and they didn't leave the water so I'm thinking something else may trigger them but probably will never know unless some turtle expert can throw light on the observation. It was neat though.

I did a little more checking and it seems that Musk Turtles are generally thought to active nocturnally or at twilight. However, this is not absolute; some feed during the day. My original guess was that they were nocturnal and we'd just stumbled on them 'getting up.' Looks like this is the case for the turtles in this area.