April 22nd, 2015. Sighting a Luna Moth (Actias luna) while walking from the Group Shelter A to the Old Fort was a bonus. It’s unusual to find Luna moths in the Spring. They are much more common in the Fall so this was a lucky sighting. 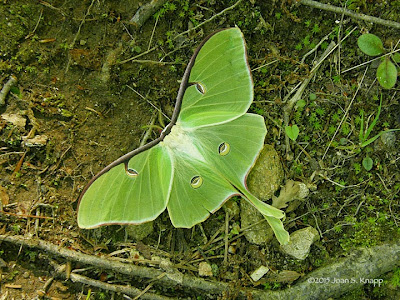 I found this moth just before noon. It’s unusual to find a moth on the ground. When they emerge from the cocoon, their wings are small. They pump fluid through them to enlarge them. They usually crawl to a nearby bush or tree and climb up a foot or two and hang their while their wings harden and they excrete the exceed fluid from their bodies.

The wings on this moth, a female, were already enlarged when I found her and she had excreted much of the excess fluid. She was flopping around and in danger of ending up on the trail. I picked her up carefully and carried her a few yards along the trail, and then climbed the hillside and placed her on the leaf litter near some trees. When I came back by this spot on the trail about an hour-and-a-half later, she was no longer on the leaf litter. 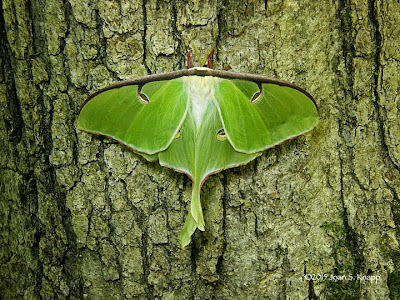 I climbed the hill and found that she had made her way to a nearby tree and climbed to about a foot off the ground.  She would probably stay there until nightfall when she would fly off in search of a mate.

This moth was a female. It’s easy to differentiate between the male and female moth by the size and structure of the antennae. The antennae of the male are slightly larger and more complex that those of the female.

I've been lucky enough to have found five Luna Moths in the woods in the last few years but I never tire of finding them.