April 30th. (Continued from…) I started to walk again at Fort Yargo State Park in Winder, Georgia. One of my favorite walks is from the Group Shelter A to the Old Fort and back.This is a rewarding walk for viewing wildflowers and I’ve been trying to walk it weekly and document the wildflowers I see. 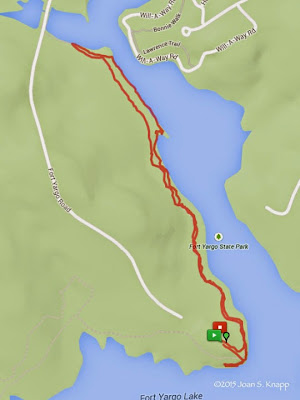 As I started into the Rock Garden a Great Blue Heron (Ardea herodias) flew in to the lake shore just ahead of where I was. My walk through the Rock Garden was going to be distracted as I tried to photograph the heron while paying attention to plants. The bird was going to win for as long as it was there. 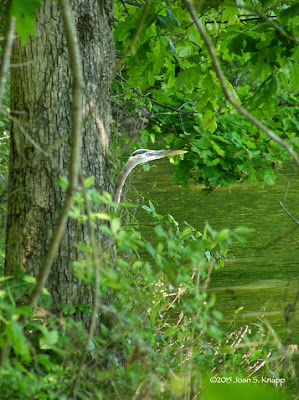 I could catch a glimpse of the herons head; it was fishing. I wasn’t sure how much attention it was paying to me because it was catching fish, but I was sure it was keeping an eye on me and I wasn’t going to get too close. I spotted a cluster of Solomon’s Seal (Polygonatum biflorum) plants that were blooming. This was the biggest cluster of plants that I’d seen here; most plants were isolated rather than in clusters. 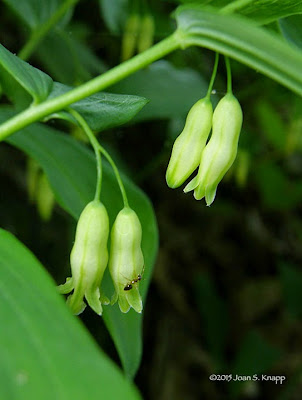 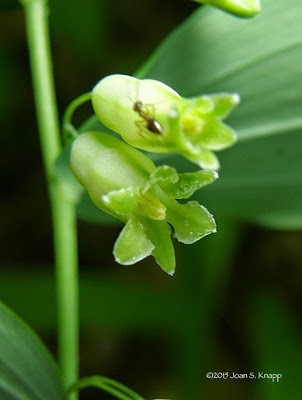 A view from underneath the flowers. 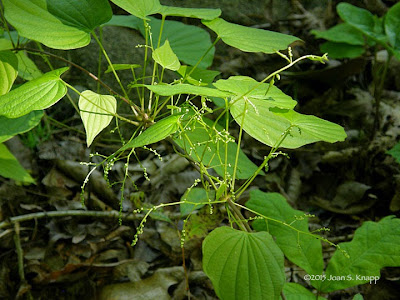 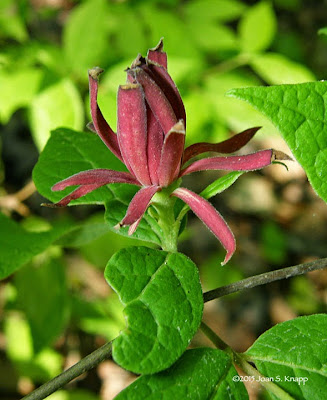 One Eastern Sweetshrub (Calycanthus floridus) still had flowers, and at least… 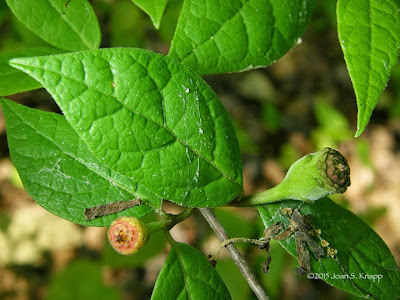 one flower stem was swelling. Hope for another seedpod? 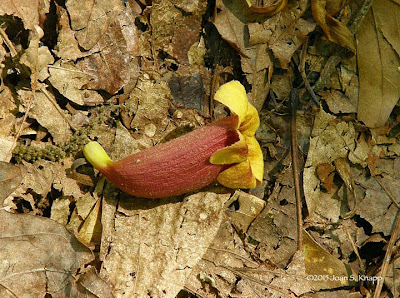 Somewhere, up high in the trees, Crossvine (Bignonia capreolata) vines were blooming but all I was going to see were fallen flowers. 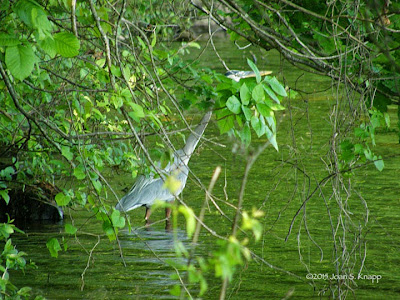 Another view of the heron. It would spot a fish and pounce. Having disturbed the fish in the area it had just pounced on, it would return to shore a little further away from me. 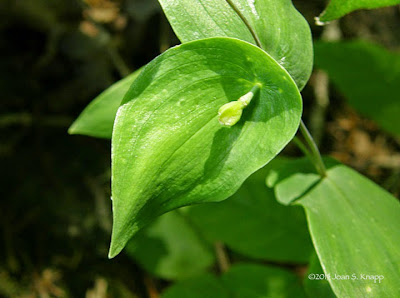 The Perfoliate Bellwort (Uvularia perfoliata) plant was still healthy although there was no sign of the flower stem enlarging. Time will tell. 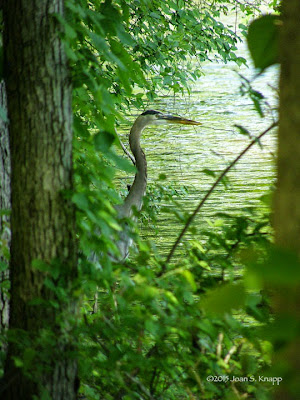 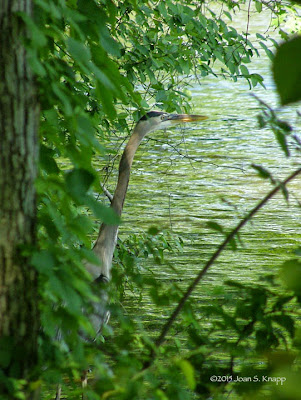 The last photos of the heron. It did get a rather large fish, possibly five to six inches long. Soon after, however, some kayakers paddled by and the heron decided to try a new, quiet location and flew off down the lake. 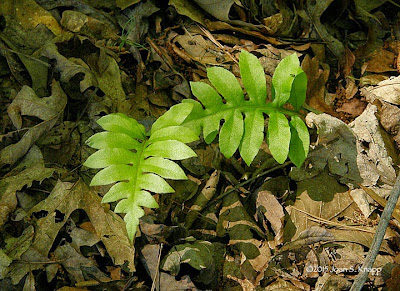 Netted Chain Fern (Woodwardia areolata) fronds. There is a patch of these plants at the end of the Rock Garden trail just as the trail goes uphill back to the main trail. 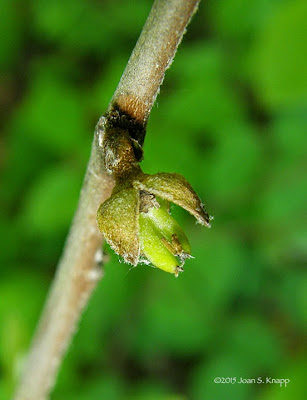 The fruit were still on the Smallflower Pawpaw (Asimina trifolia) plant just past the end of the Rock Garden trail. 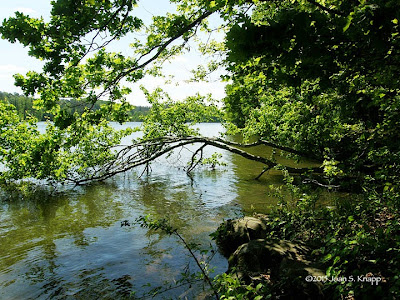 Looking back along the lake shore from the end of the Rock Garden trail. 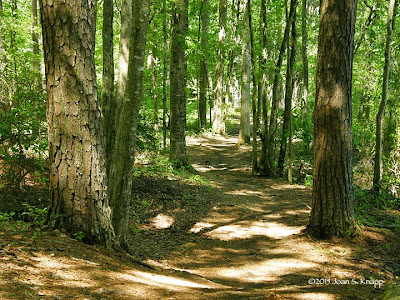 The trail from the end of the Rock Garden to the Old Fort, and… 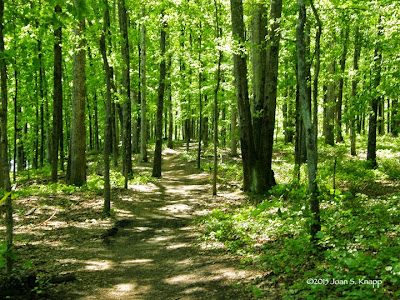 back towards the Fishing Area on the main trail. 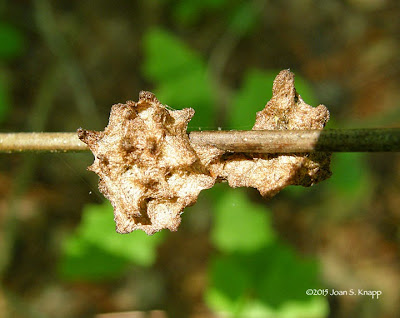 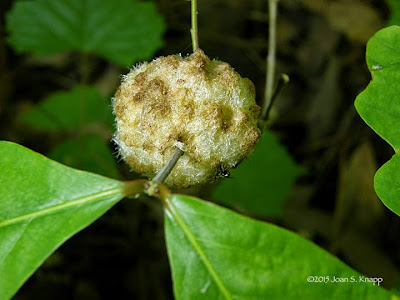 The small Woolsower gall on the White Oak (Quercus alba) near the trail were drying up and would now be hard to find if you didn’t know where they were. The larger galls were also harder to spot now that the red spots had turned brown. 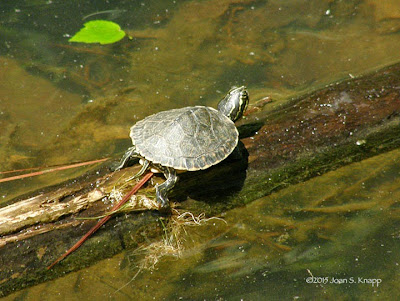 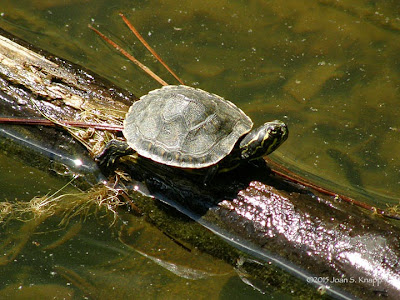 As I approached the bridge at the Fishing Area, I spotted a small Yellow-bellied Slider (Trachemys scripta) turtle – its shell was probably only about three inches long - basking on a small, floating log. For some reason it didn’t slide off into the water so I was able to get quite close for some photos. 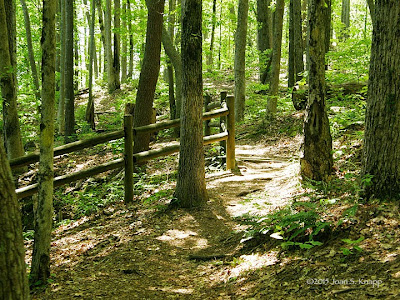 Approaching the cliff, where I was able to look back to the… 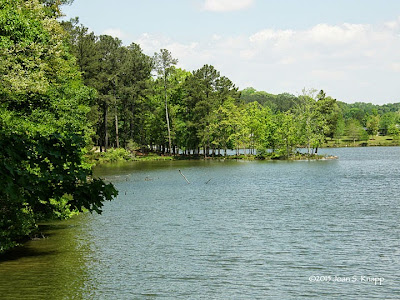 Fishing Area, then back down the trail and… 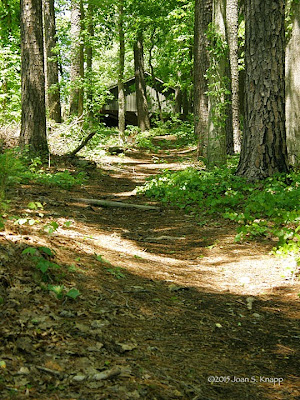 up the final hill to the parking lot. 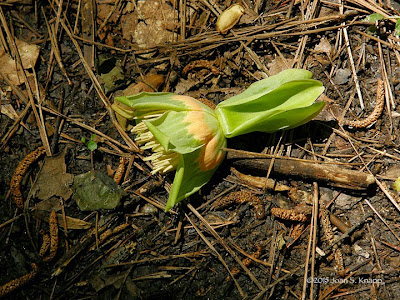 A fallen Tulip Poplar (Liriodendron tulipifera) flower near the end of the trail. Usually, this is the only way we see these flowers in old woods where the Tulip Poplar trees are so tall.