The East Swamp On Enoch John Road: Death And Rebirth

April 24th, 2015. We take a road trip to Wilkes County at least four times each year. W volunteers to monitor frog species diversity and numbers on a prescribed route in the county. We take the opportunity to visit different places in the county before we ‘run the frog route’ after dark. Usually, these include… 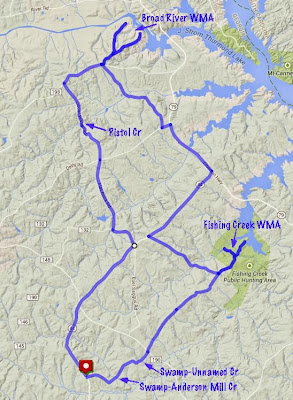 two swamps on Enoch John Road, Fishing Creek Wildlife Management Area (WMA) and the Broad River WMA; we return to the beginning of the route via Pistol Creek.
We begin the route on Enoch John Road from the Danburg Road (GA-44). This is a dirt road that may be slippery in some spots when its wet. There are two swamps on this road. The first is on Anderson Mill Creek (the west swamp) and the second is on an unnamed tributary of Fishing Creek (the east swamp). 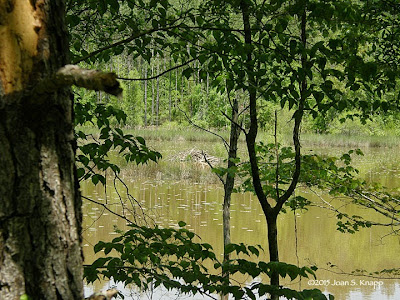 At the road, the east swamp on Enoch John Road is quite different from the swamp on Anderson Mill Creek Road… 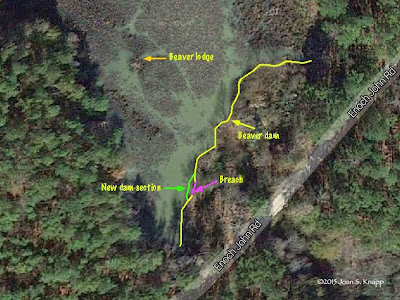 This swamp is contained by a longer and higher beaver dam. (The scale of this diagram is 0.5x the scale of the diagram of the Anderson Mill Creek swamp). The beaver dam is much higher than the dams on the Anderson Mill Creek swamp. At its highest point, this dam is probably about 12 or more feet high and quite thick at its base. It’s hard to appreciate the magnitude of this dam from the road because vegetation masks it from view. We did have a unique opportunity gain an appreciation of this dam. 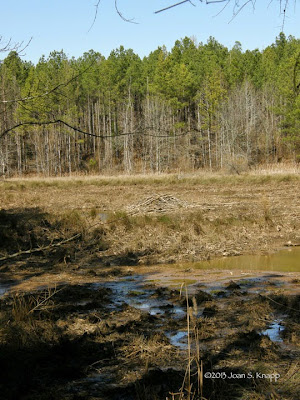 On February 2nd, 2013, we drove by the swamp only to find, to our dismay, that the swamp had been drained. The beaver lodge was high and dry. 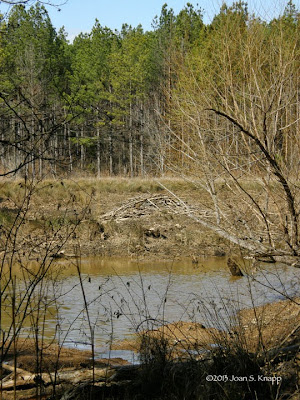 A closer view. There was a shallow pool of water in the foreground but, otherwise the swamp appeared to be dry. 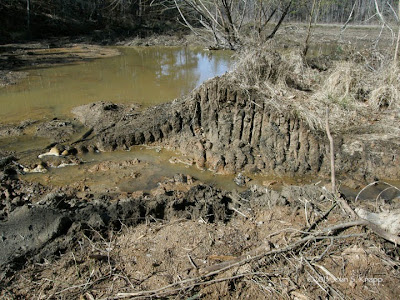 We explored and found that in 2013 when heavy machinery had been used to breach an 8 to 10-feet section of the shallow end of the dam near the road. We assumed that the breach had been made recently judging by the fact that the marks from the scoop appeared to be fresh. The breach did show the thickness of the dam; this was an old, established dam.

Since it was winter, we were able to walk along a hillside on the west side of the dame without having to fight through, or worry about stepping on snakes in the undergrowth. 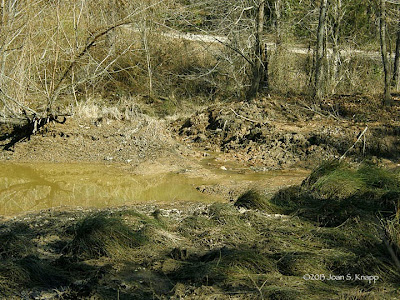 This photograph shows the breach from the hillside to the west. 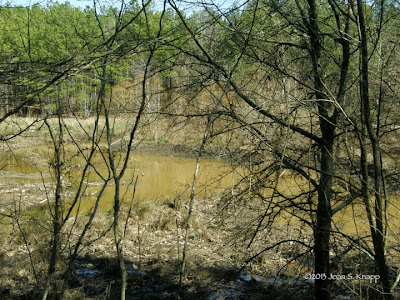 The creek channel is to the left just above the middle of the photograph. The pool of water that remained extended along behind the dam is several feet below the top of the dam. This photograph also gives a much better appreciation of the location of dam that is not possible from the road because of the vegetation between the road and the dam. 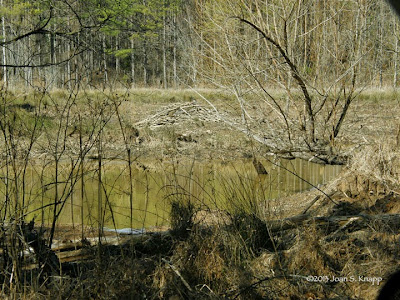 A closer view of the beaver lodge. 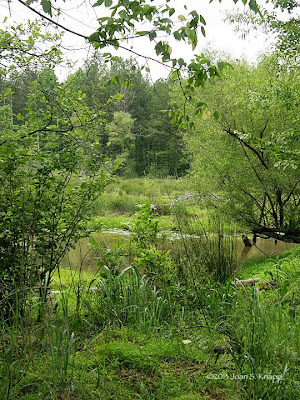 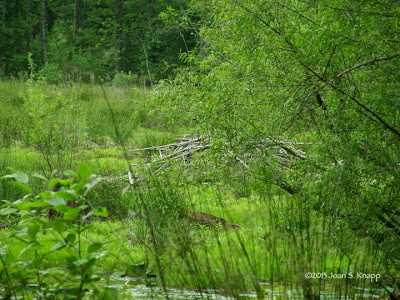 We drove by the swamp again in May 2013 and, sadly, it didn’t appear that the beaver had attempted to rebuild the dam. The vegetation that grew in the area was lush due to the richness of the deposited silt.

Our next visit was in February of 2014. As we drove into sight of the swamp, it was clear that a great deal of the area was flooded again. It takes a fair bit of effort to get to a spot to view the dam so we walked along the hillside again. 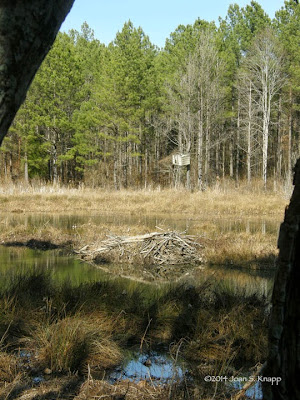 The water level had risen to the base of the beaver lodge. 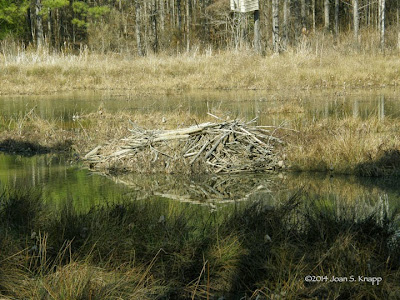 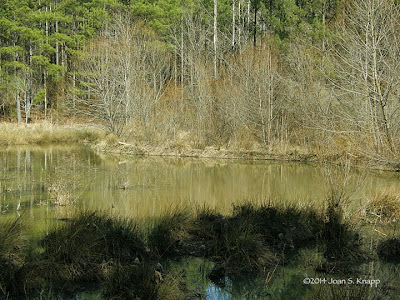 A view of the backside of the dam that shows the evidence of vegetation that grew on the exposed surface during the previous year. 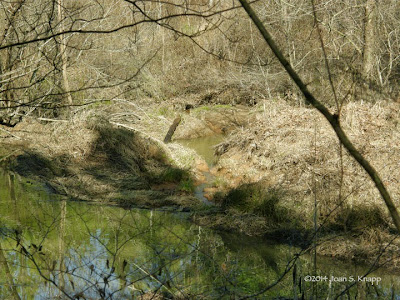 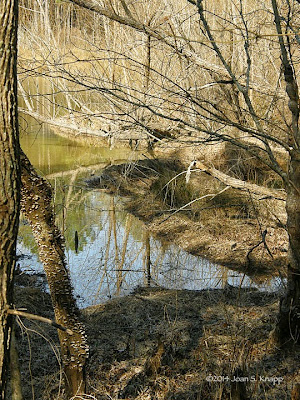 We could see what looked like a dam holding back water near the breach but couldn’t really appreciate what the beaver had done. We made our way around to where we had taken photos of the breach the year before. 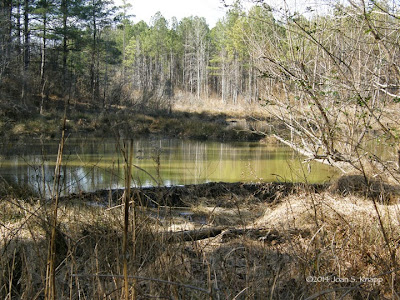 From the front, we could see that the beaver hadn’t repaired the breach. They had simply built a new dam along the edge of the breach. It was longer than the original dam that had required much less material and took a lot less effort than repairing the breach in the old dam. 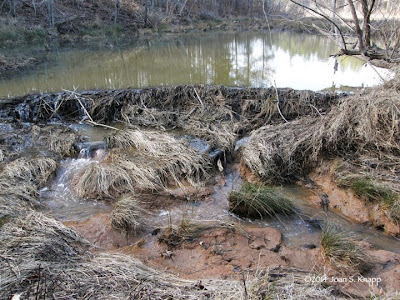 A closer view of the new dam section. 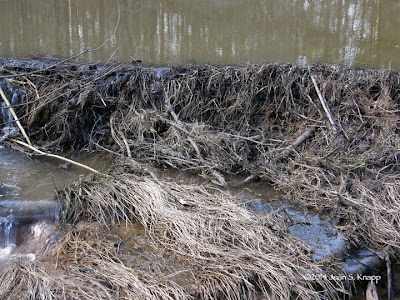 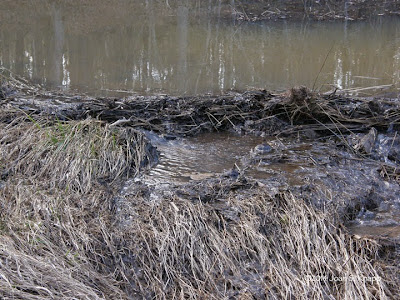 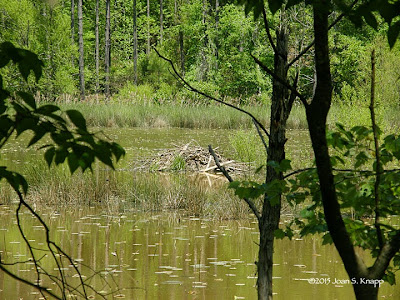 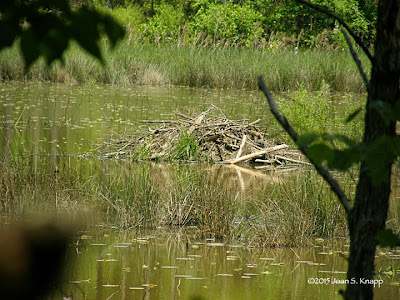 When we drove by the swamp in April 2015, the water level was the same or perhaps a little higher than it had been in April 2014. 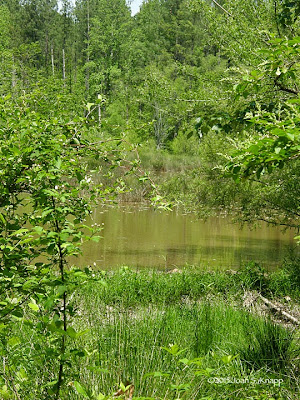 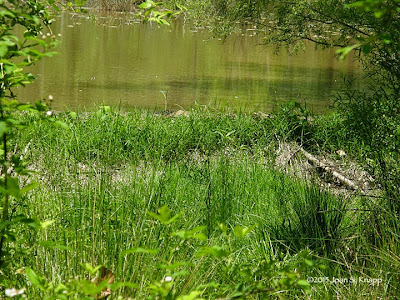 We could see the new section of the dam from the road and didn’t try to get closer. The dam face was dry, indicating that it was sealed and holding the water. A new crop of grass was growing on the top of the dam and would continue to help solidify the dam as well as gradually increasing its height.

It’s not clear whether the original destruction of the dam was sanctioned or a case of vandalism. It didn’t seem to make much sense to destroy it. The dam was solid and we’d never seen flooding of the road here as is a constant state of affairs at the Anderson Mill Creek swamp. It usually takes a lot more than breaching a dam to discourage beaver from simply repairing it and, in this case, the beaver didn’t even have to expend much energy to restore the swamp. In any case, it was nice to see that the swamp was healthy again. This will ensure that survival of a large patch of American Lotus (Nelumbo lutea) that grows and blooms at the edge of the swamp.

Related posts:
- What Is Wrong With These People?
- Beaver Lodge On Wilkes County Swamp
- The Swamp On Anderson Mill Creek