April 22nd. I started to walk again at Fort Yargo State Park in Winder, Georgia. One of my favorite walks is from the Group Shelter A to the Old Fort and back.This is a rewarding walk for viewing wildflowers and I’ve been trying to walk it weekly and document the wildflowers I see. 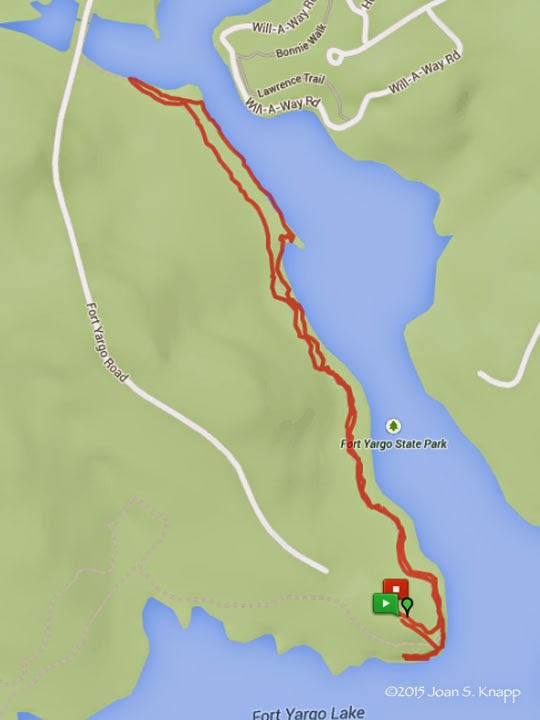 The route, which I described here, here, and here. This turned out to be one of my most productive Spring walks. 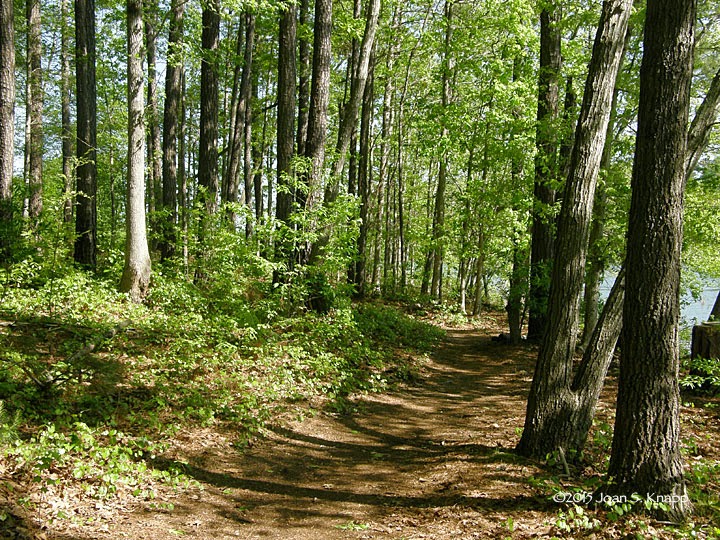 This was the first sunny walk in some time. 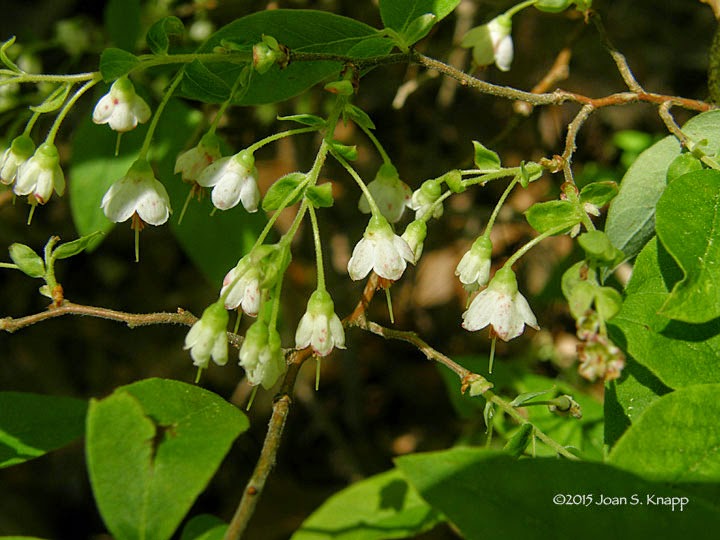 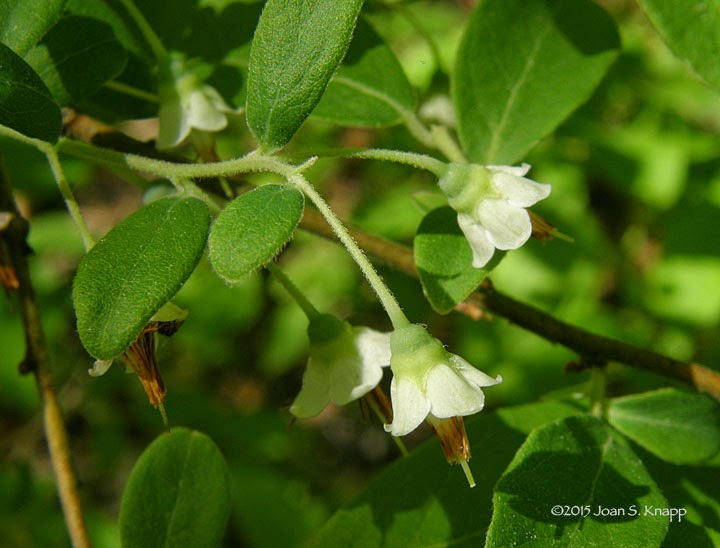 The Deerberry (Vaccinium stanineum) plants were still blooming in some areas. 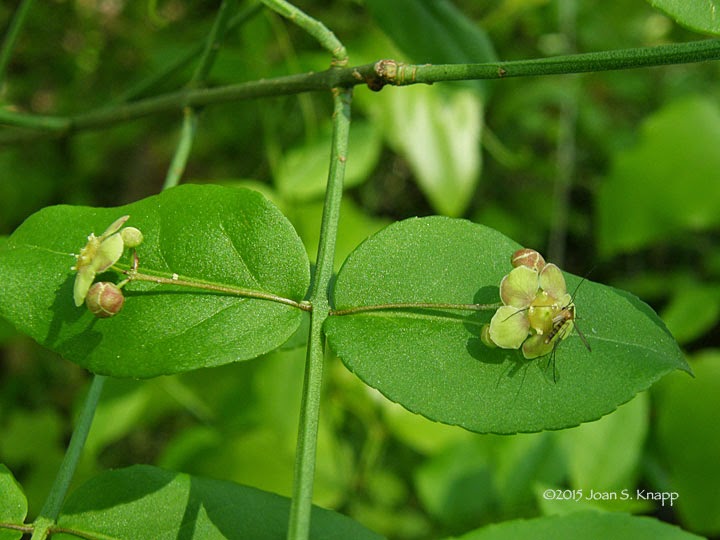 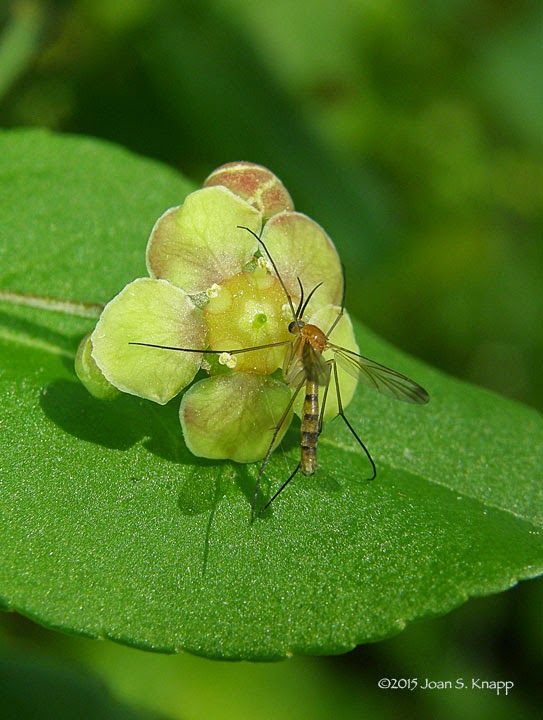 I stopped by a Strawberry Bush (Euonymus americanus) near the water’s edge. Finally, some blooms! A tiny insect was busy feeding on nectar from the flowers and, hopefully, was pollinating them at the same time. 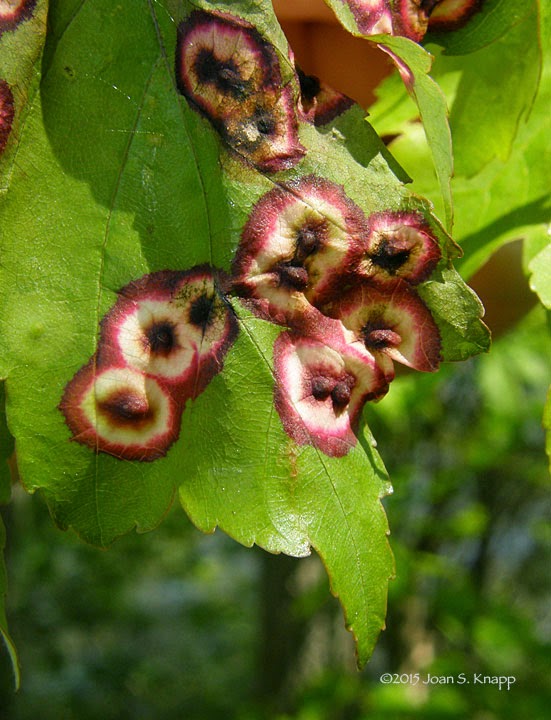 Leaves of a nearby maple tree had Maple Eyespot Gall/Eyespot Midge Gall. These striking spots on Red Maple, and occasionally Silver Maple, leaves are caused by the Ocellate Gall Midge (Acericecis ocellaris). The midge lays its eggs on the underside of the maple leaf. The maggot hatches and produces hormones that cause the striking red and yellow rings around the gall. The maggot develops in 10 days and drops from the leaf to pupate on the ground. The eye spots turn brown with age. 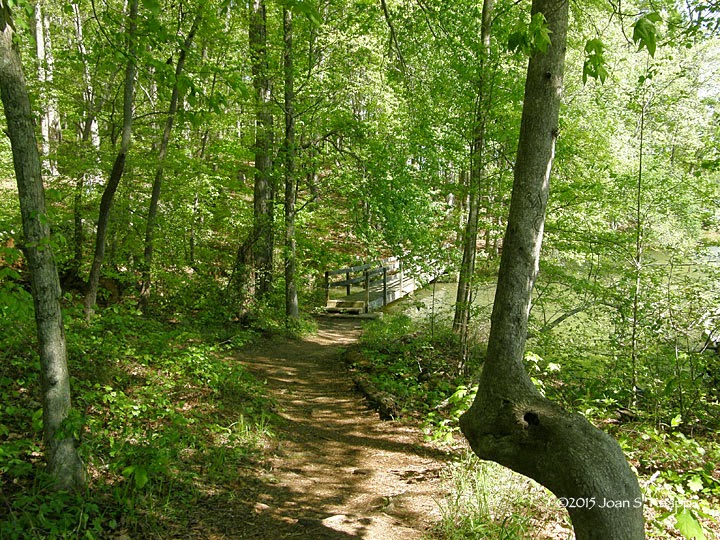 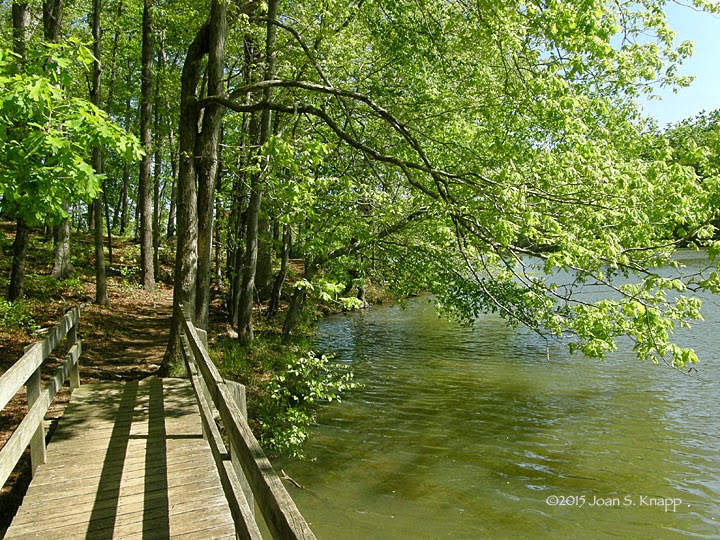 The trail by the first bridge was much more shaded than previously. The bridge was still in the sun though. 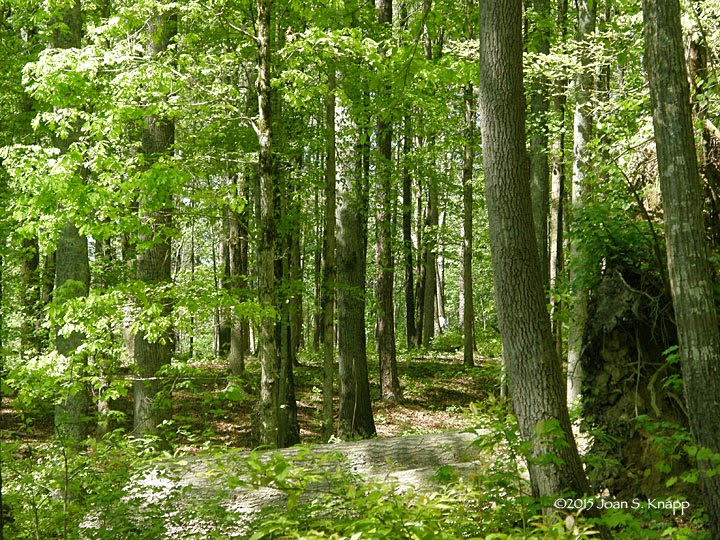 A little further along the trail, in the increasingly shaded woods, a flash of white caught my eye. 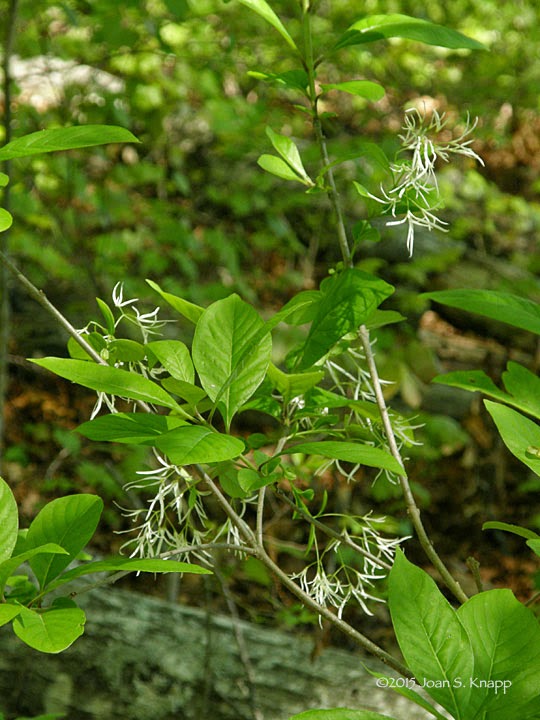 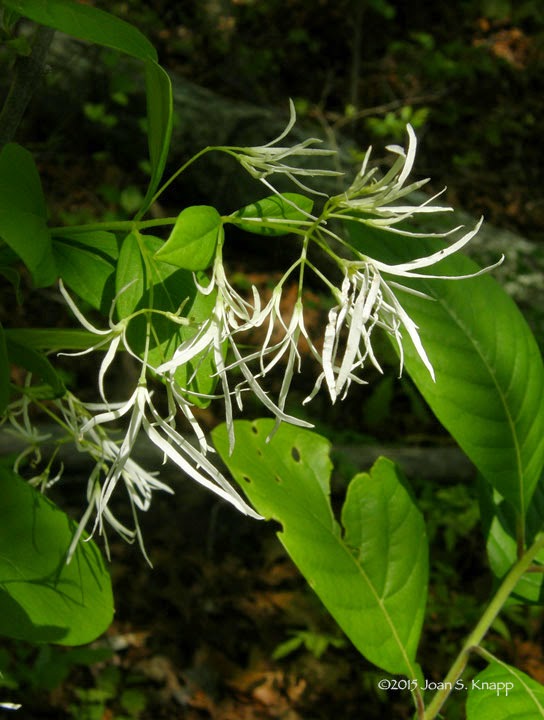 To my surprise, it was a small Fringe Tree (Chionanthus virginicus) in bloom. The tree was only about five to six feet tall with only five or six flower clusters. A very pleasant surprise; The flowers had fallen by my next walk, so I was lucky to see it. 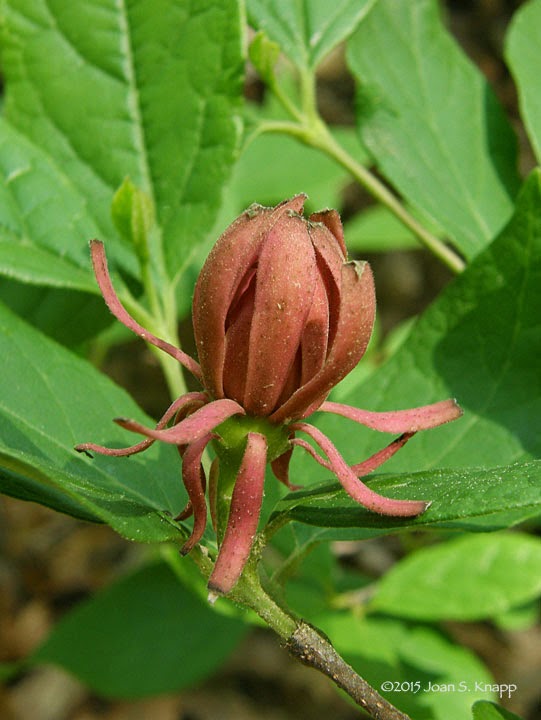 The Eastern Sweetshrub (Calycanthus floridus) plants were still in bloom but I was interested in whether any had been fertilized. I looked around and… 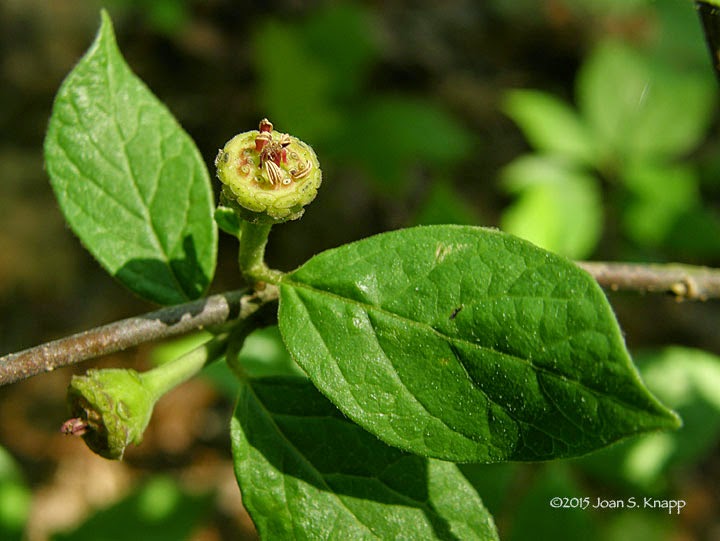 found some flower stalks still attached to the bushes. Although none had started to swell, there was some hope that some might develop seedpods. 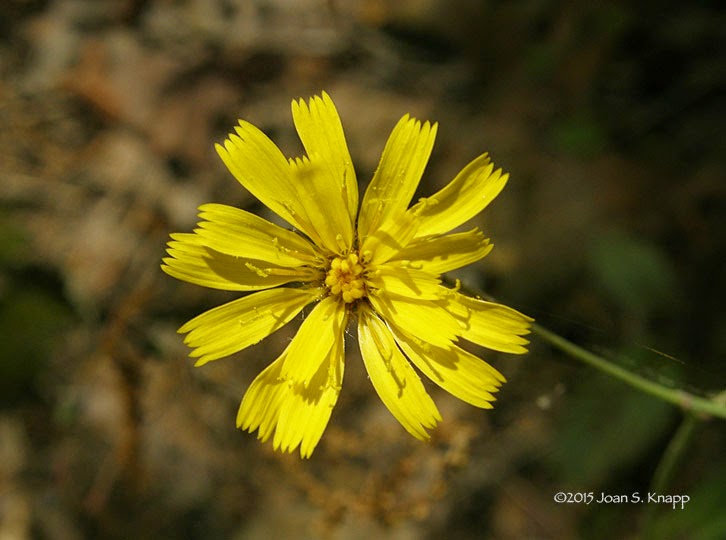 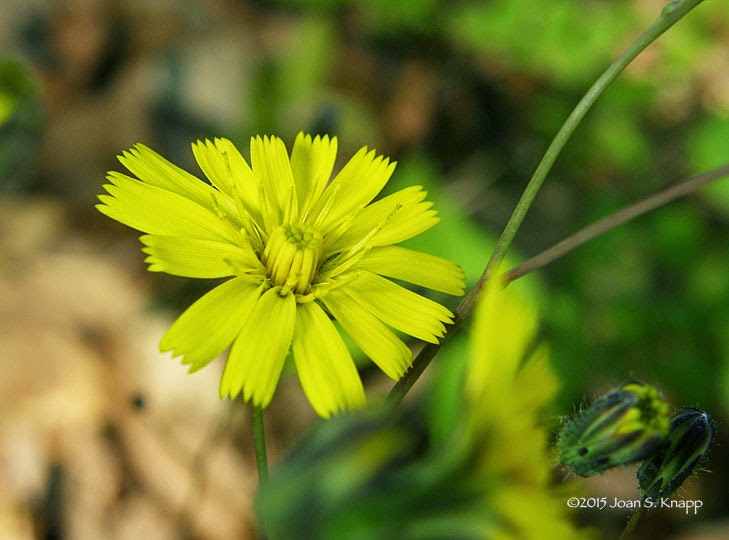 The Rattlesnakeweed (Hieracium venosum) plants on the trail approaching the cliff were starting to bloom.

As I approached the cliff, I spotted what amounted to a single stem with branches that was starting to leaf out but which was covered with many stalked clusters of flowers – or so I thought at the time. 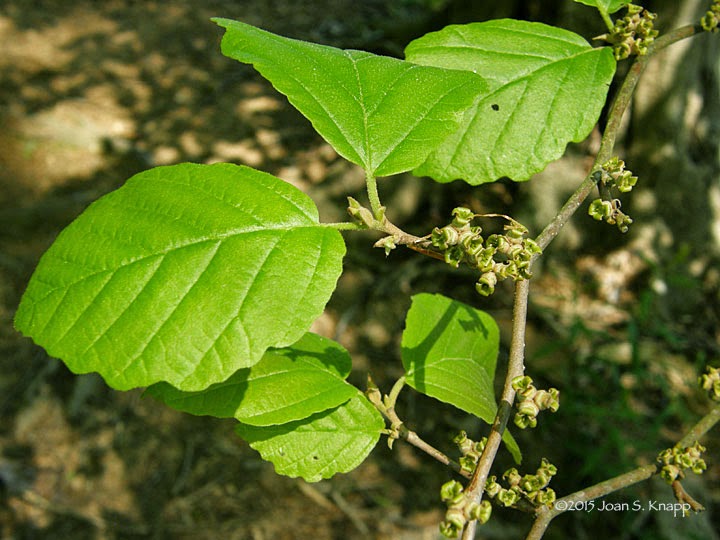 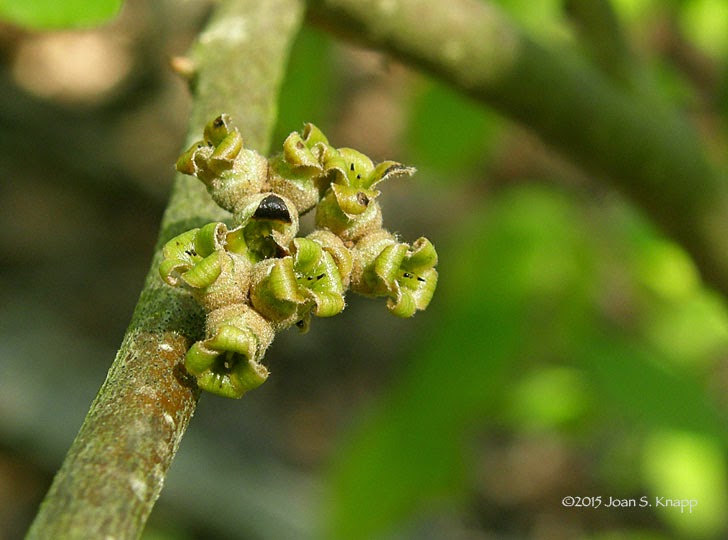 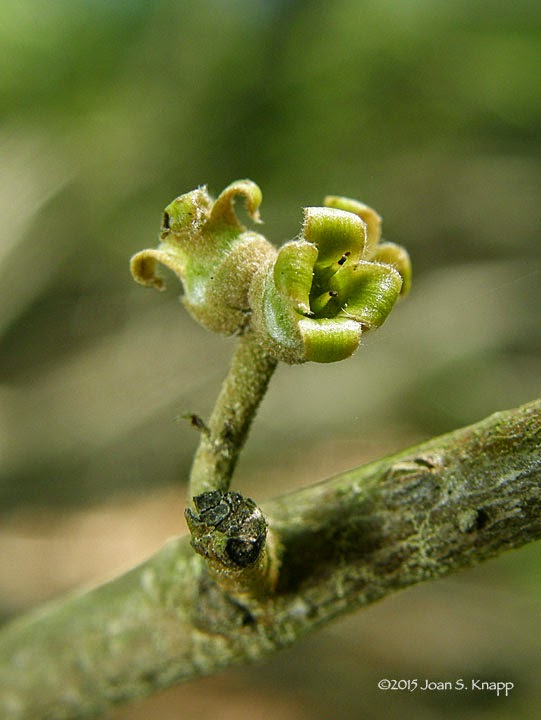 I’ve finally figured out that these are probably flower stalks of American Witch-hazel (Hamamelis virginiana). According to Name That Plant, this shrub/tree should bloom in August-October. Previously, I’ve only seen a witch-hazel, a 25 to 30 ft tall tree – blooming in the woods in southern Georgia. I’m excited to have found one locally and I’ll have to make sure that I remember to follow this shrub. 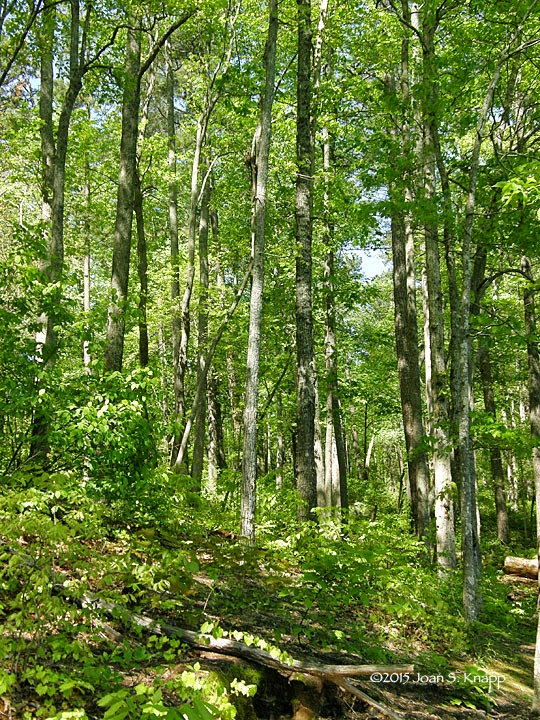 These woods are beautiful at this time of year. 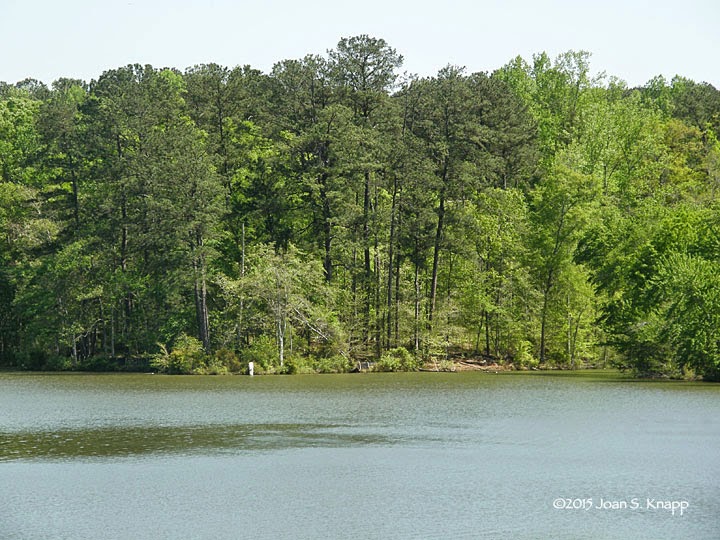 The sunny weather allowed for a pretty view of the lake. A pair of Canada Geese (Branta canadensis) usually nests on the point in the middle of this photograph. I’ve seen geese in this area; I wonder if they’re using this spot tis year. 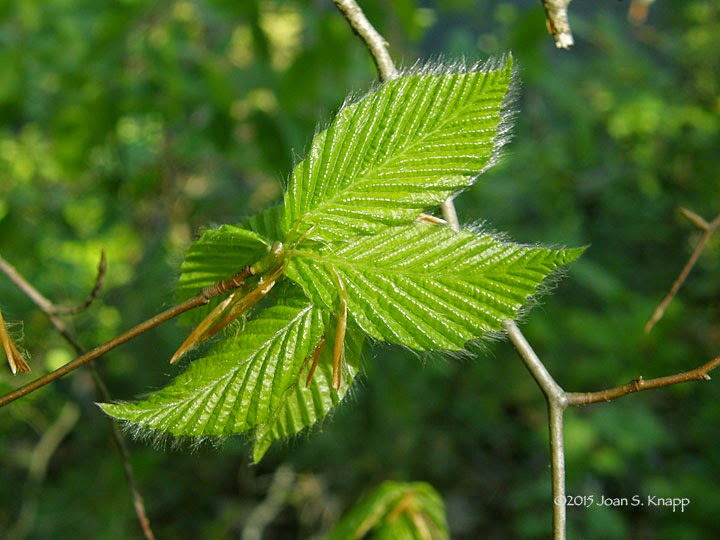 Back on the trail, the American Beech (Fagus grandifolia) leaf buds were opening. The beech trees were starting to join the other trees providing shade in the woods. 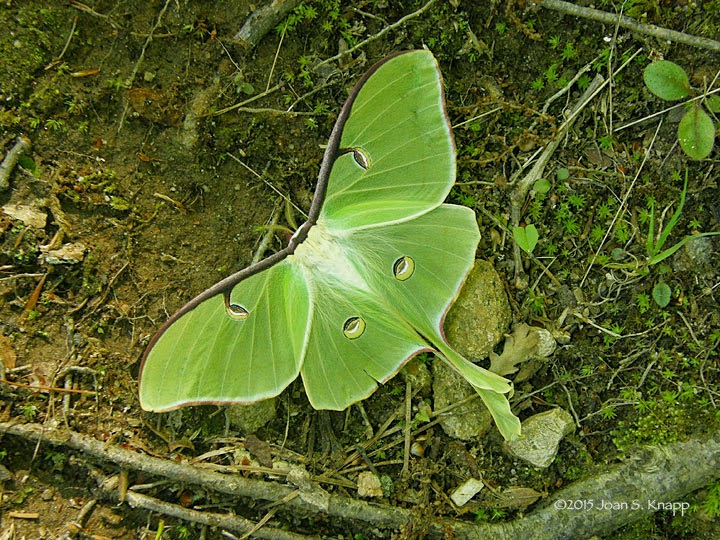 And then something I didn’t expect. A Luna Moth (Arctias luna) – a female – was lying on the leaf litter just above the trail. I’ll post on this separately. 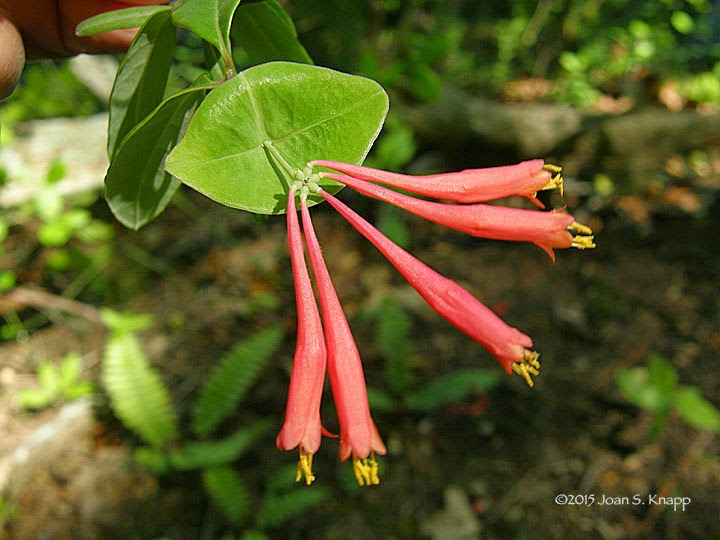 I found ‘my’ Trumpet Honeysuckle (Lonicera sempervirens) flowers. The weight of the opened flowers had caused the vine to fall and it took a while to find them. Only a few flowers had survived to open. 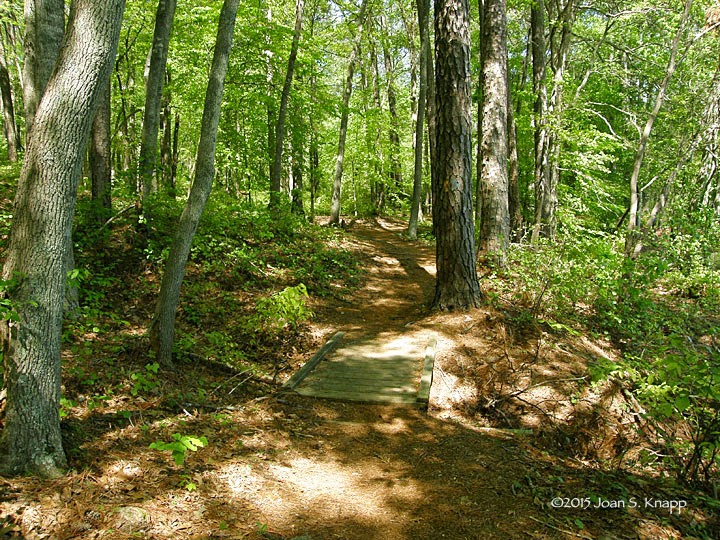 On down the trail towards the Fishing Area and… 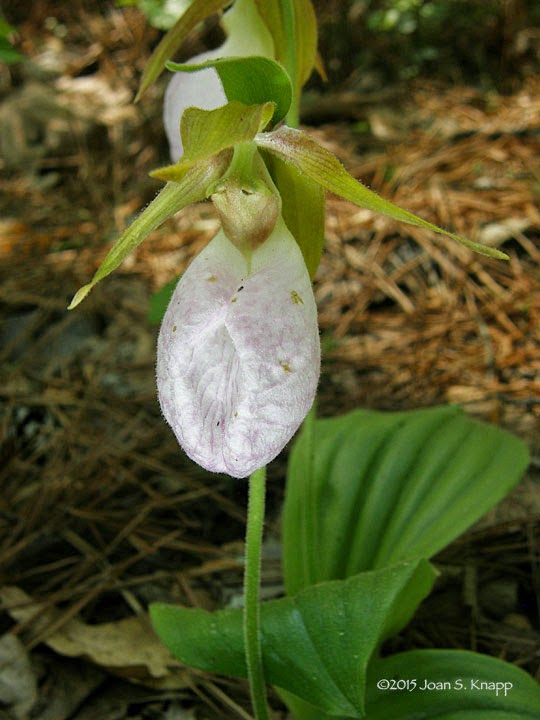 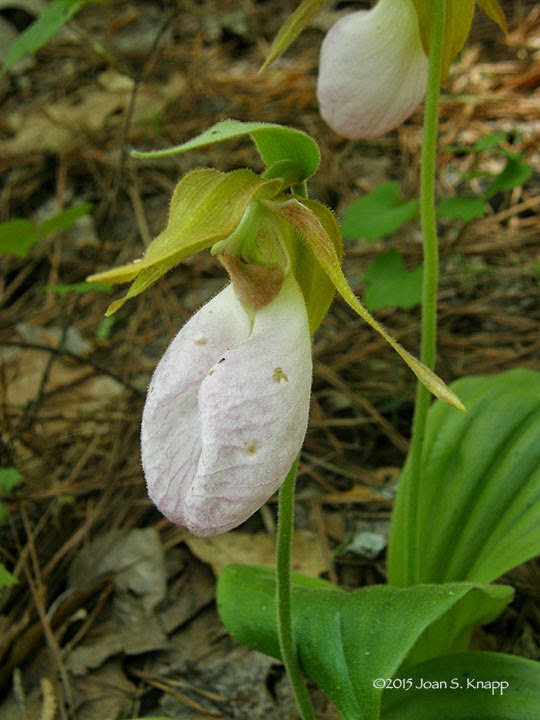 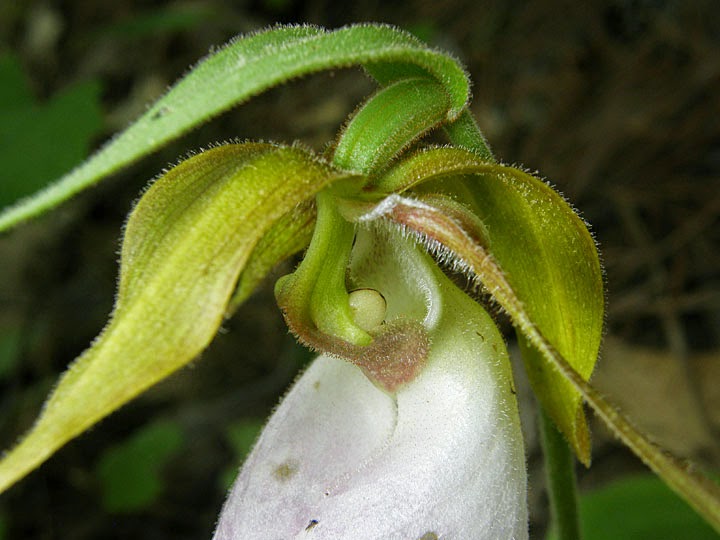 The Pink Lady’s Slipper (Cypripedium acaule) orchids. They were still blooming. It was a change to see them in sunny weather but they were in the shade and I still needed artificial light to photograph them. 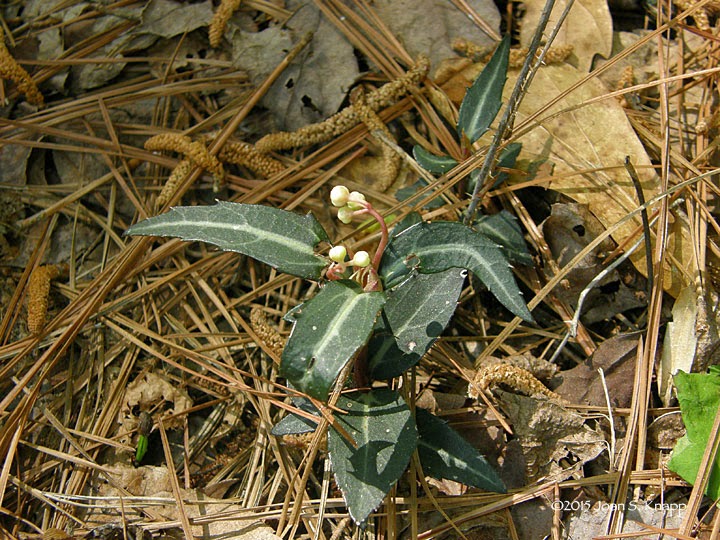 The flower buds on the Pipsissewa/Spotted Wintergreen (Chimaphila maculata) nearby were still developing. 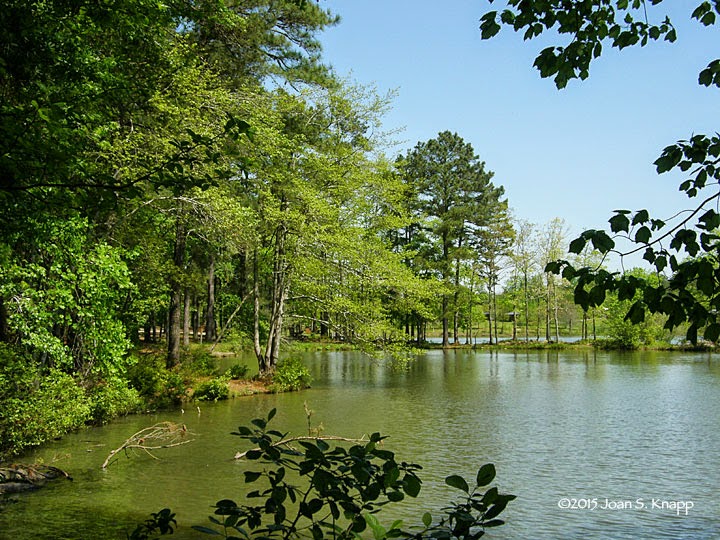 And then into the Fishing Area.
(To be continued…)

A lovely collection - that Vaccinium is one of my favorites. What you are probably seeing on the witch hazel are the forming seed capsules. After the shrub blooms in the fall (as late as Nov), they take a whole year to mature into capsules.

Ellen, thanks for the feedback on the witch hazel. I'm looking forward to watching the development of these flower clusters - and to their blooming in the fall.