June 22nd. When I was walking along the trail from the Old Fort to the Picnic Shelter A at Fort Yargo State Park, I noticed a large patch of fungus on the side of a large, fallen pine log. I almost ignored it but decided to make my way through a jumble of fallen tree trunks to take a closer look. I’m glad I did. I was expecting to find a crust fungus but may have found a much more interesting fungus. 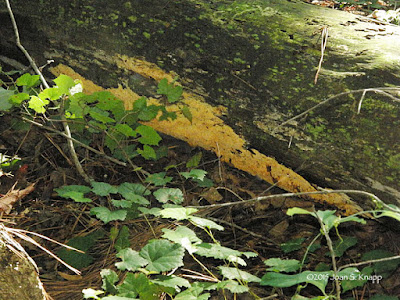 The fungus, at its longest point, covered about three feet on the ‘underside’ of the log. 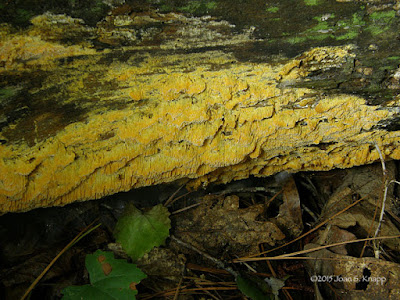 As I got closer, I could see that it wasn’t a crust fungus. It appeared to be a polypore of some kind. 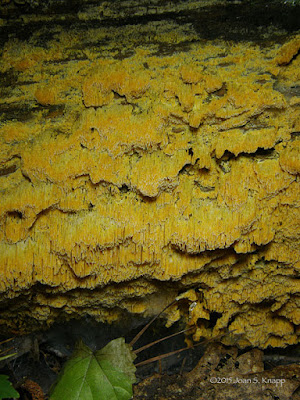 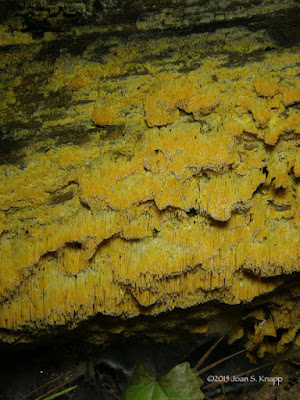 The fungus had no caps and looked like a collection of curtains hanging on the underside of the log. 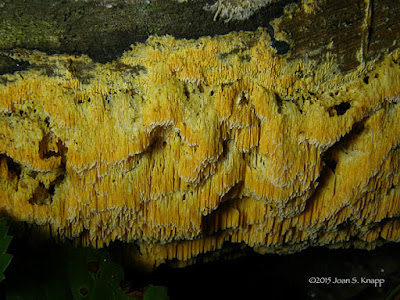 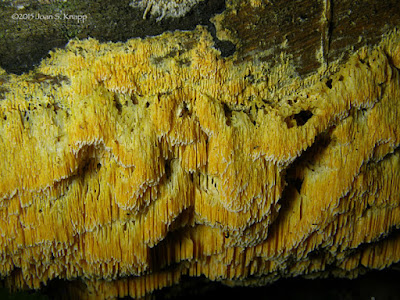 A closer view of this fungus. It was golden-orange with white tips.; its tubes were folded, with an irregular, hanging curtain appearance; its tubes were 1 to 2 cm long. It felt soft and spongy. 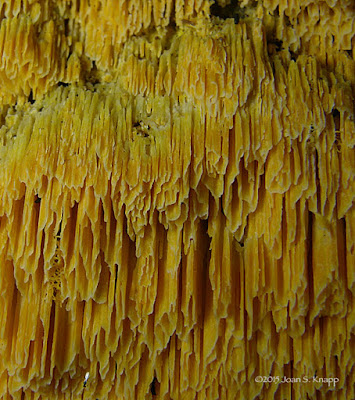 A close-up view. This view shows, in considerable detail, the yellow-orange color of the fungus with its irregular, ‘eroded,’ ‘veil-like’ appearance.

It was hard to get a mental image of what the pores would look like. I couldn’t get my camera lens in a position to photograph the pores on June 22nd. I returned on June 28th with a mirror that would fit under the log. By this time,… 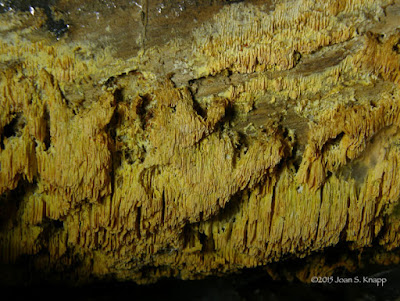 patches of the fungus had fallen off. 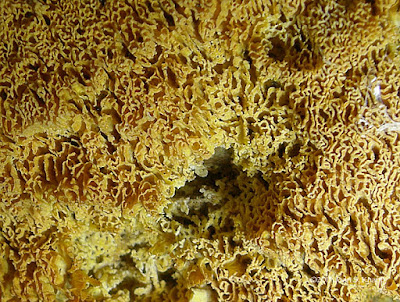 I was able to photograph the pores; they were very irregular. 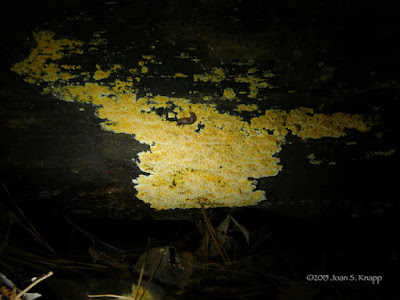 I found another, much smaller patch of this fungus – about nine or ten inches long – on a fallen pine log on the trail from the Section B parking lot to the dam.

slugs may contribute to this erosion. This slug was grazing on this smaller patch of fungus. 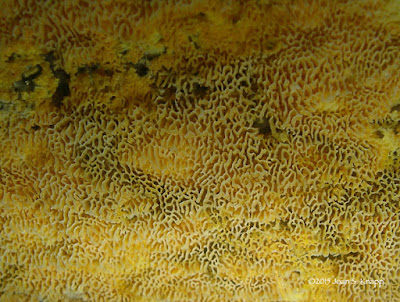 I was able to get photographs of the pores of this younger fungus that also showed the irregular pore shape that I’d observed with the first colony. I wasn’t able to perform the potassium hydroxide test or get a spore print; these will have to wait until next year.

When I tried to identify this fungus, the description of the Orange Sponge Polypore (Pycnoporellus alboluteus) matched the images that I had collected. The description given by Mushroom Expert indicates that this species is saprophytic. grows on the dead wood of conifirs, and spreads along the underside of the log. In some areas it fruits in spring to summer or summer to fall.

This species usually lacks any cap, may spread for a meter or more. Its flesh is soft and spongy, appears felty or finely hairy; its tubes may be 2 cm long, its pores are angular/irregular and 1 mm or more across. The pore surface erodes to create an irregular, toothed appearance. The flesh is thin and bright orange in appearance, fading to paler orange. The species has a white spore print and stains bright red with potassium hydroxide.

The fungi I found match the description for Pycnoporellus alboluteus. The locations of the fungi I found are, however, far further south than has been reported previously and at a much lower altitude (254 m) than other observations. Both locations were west-facing but in shaded areas that were moist and receive little or no direct sunlight. The larger fungus was in an area that receives little, or no, direct sunlight and the smaller fungus was in an area that is drier and receives limited sunlight. If this fungus is not Pycnoporellus alboluteus, it is probably a related, previously undescribed, Pycnoporellus species, that tolerates higher temperatures. Either way, an exciting find.