June 17th. I spotted a number of these… 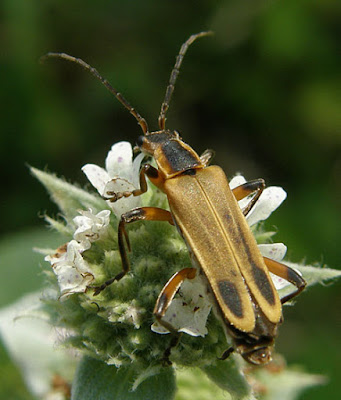 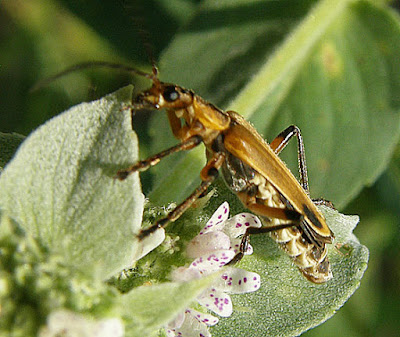 beetles feeding on flowers of the Hoary Mountainmint (Pycnanthemum incanum) at Fort Yargo State Park on June 17th. They weren’t colorful but were quite striking with their brown and black coloration. I submitted the images to Bug Guide where they were identified as the Margined Leatherwing (Chauliognathus marginatus). 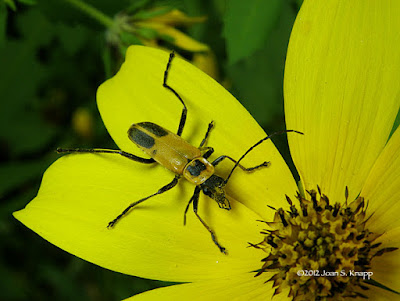 I realized that I had seen the Pennsylvania Leatherwing in October, 2012 in Stephens County.

The Margined Leathwerwing will be found in the spring in prairies and grasslands from New York state and Southern Ontario, west to Nebraska, and south to Texas, Mexico, Florida, and the Bahamas. The Pennsylvania Leatherwing will be found in the fall (mainly August-September) in open fields, prairies, grasslands, parks, roadsides, sand dunes and abadoned fields from New Brunwick to Mannitoba and south to Colorado, Texas, and Florida. Both species feed on nectar and pollen. The Margined Leatherwing may be found on a number of different species; the Pennsylvania Leatherwing, because of the time of year, mwy be found primarily on goldenrod.

These are strikingly attractive beetles. I'm glad I saw the Margined Leatherwing this spring. I’ll be looking for the Pennsylvania Leatherwings closer to home in the fall.