As we were driving back out to the highway from Whitehall Lake, W spotted movement in an opening in the woods. We stopped and backed up. A little way back in the woods some Wild Turkey (Meleagris gallopavo) were making their way across the clearing, feeding as they went. They didn’t appear to be aware of our presence. It was getting late and the light level was fairly low in the shade but we tried for some photos. 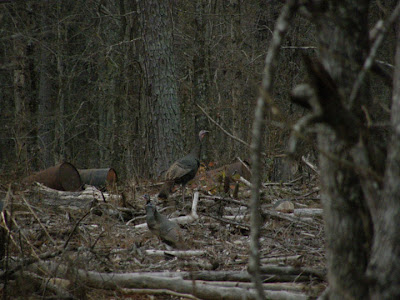 There are three the birds in this photograph. The bird in the center that is alert and two standing together almost directly in front of it but a little lower down the slope. 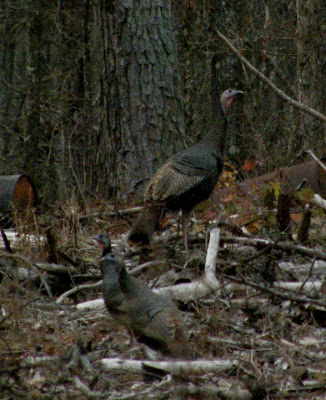 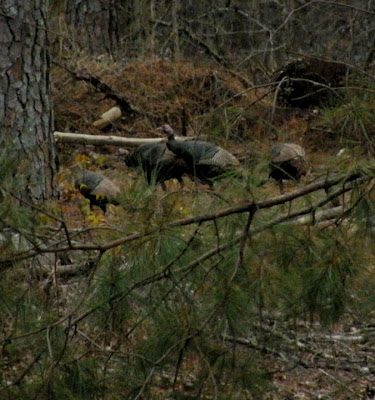 The gang began to wander back in the general direction from which they had come. They continued to feed as they went. Based on the number of birds we had seen there appeared to be at least a dozen birds in the gang; there are four birds in his photo. Judging by their sizes the gang was probably composed of adults and their poults.

W decided to try and get out to get a larger lens from his bag in the back of the truck. He didn’t remove the ignition key when he opened the door. The beeping did disturb them and they flew up into nearby trees. There appeared to be about two dozen in the gang. We’ve seen many wild turkeys over the years but this is biggest gang we’ve ever seen.
Click on an image to view a larger image

Wild Turkeys are fun, aren't they? I've seen a lot of them here and in Virginia, but usually one or two, not such a large flock.

PS I wonder how many searchers for whiskey google will send your way?

Yes, these are a lot of fun.
We, too, are used to seeing 6-7 birds at a time but nothing near as large as this.

Update: I was talking with a colleague who lives in Jackson County which is a few counties NNE of Jasper County. He reported seeing two flocks of turkeys - one with 14 members and the other with 19 members - during the Christmas-New Year week. Perhaps they flock together in larger groups during the winter down here.

I still prefer the whiskey version.