Summer On A Fort Yargo State Park Trail: Section B To The Dam, September 11th (Part 4)

September 11th (Continued from…). When I visited Fort Yargo State Park in mid-February, there were few signs of Spring. The only wildflower plants that were obvious were the leaves of Cranefly Orchids (Tipularia discolor) that I found in many places. 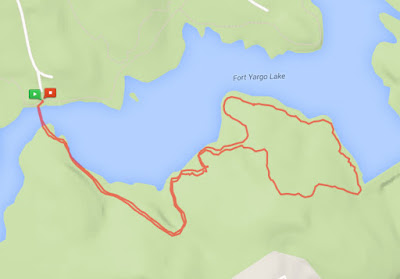 I was making my way to the Green Adder’s-mouth Orchid when I was brought up short by patches of brilliant orange at the edge of the trail. I had seen them before, in spring, but hadn’t been paying much attention to fungi at the time. But now… 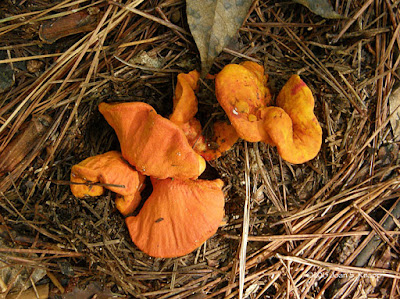 These are lobster mushrooms (Hyphmyces lactifluorum). H. lactifluorom is a fungus, not a mushroom; it parasitizes Russula sp.or Lactarius sp. mushrooms, and covers them with a bright orange layer and… 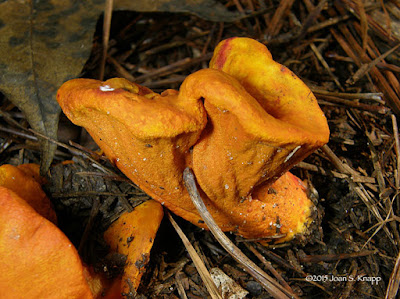 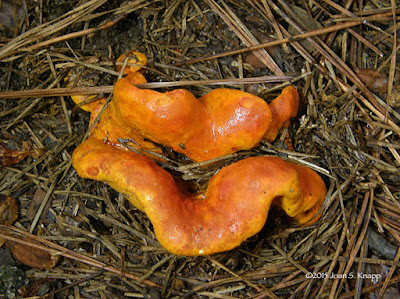 twists the host mushrooms into contorted shapes. This fungus isn’t a basidiomycete like its host; it’s an ascomycete. 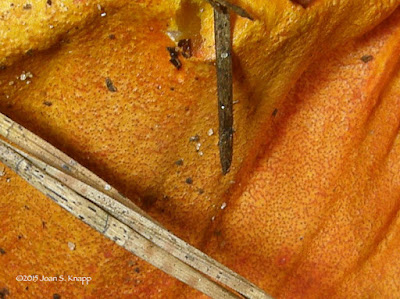 It produces spores in the tiny dark red flask-shaped, hollow fruiting bodies (perithecia) that are visible in this photograph. 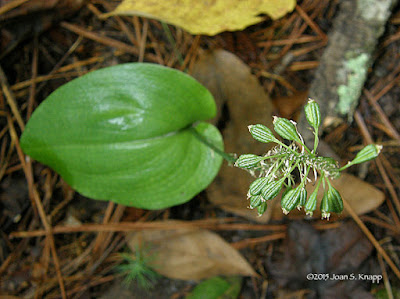 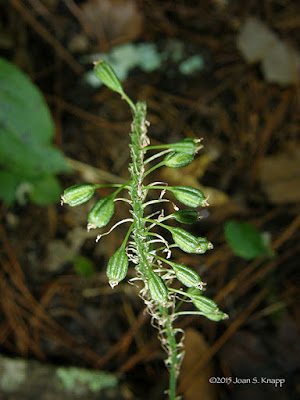 The Green Adder’s-mouth Orchid seed capsules were still developing nicely. They seem to take a long time to mature – for seed capsules that are so small. 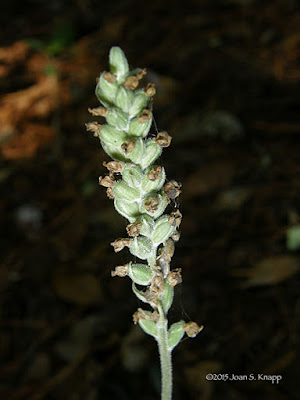 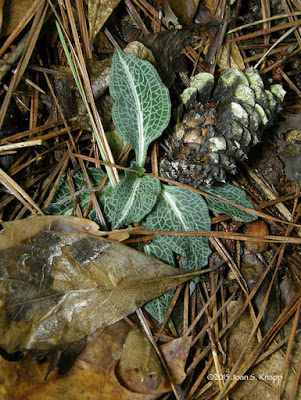 The seed capsules on the Rattlesnake Plantain (Goodyera pubescens) were still developing nicely in the woods off to the right of the Green Adder’s Mouth orchid.

On my way around to the hill, I found a couple more mushrooms. 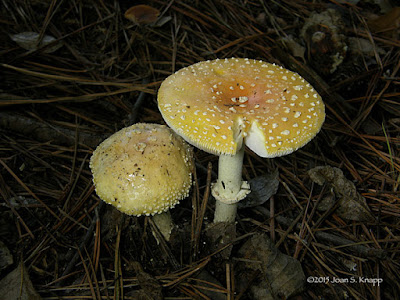 Amanita muscaria var. persicina; just these. We don’t see many of this species in the park. 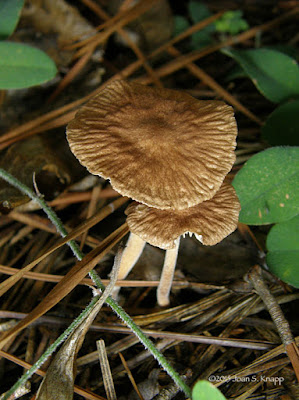 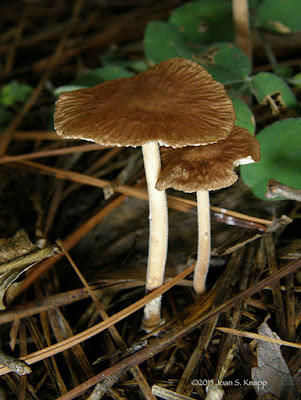 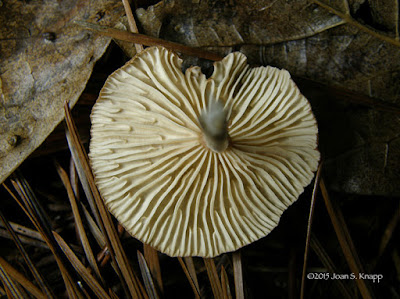 In contrast, these little brown mushrooms were scattered widely in pine needles. These were older specimens whose caps had wrinkled. Friends on the Facebook Mushroom identification Forum identified these as Gymnopus subnudus, one of the LBMs (Little Brown Mushrooms).

My walk back through the woods was uneventful. Towards the end of the trail in the main woods, I found the… 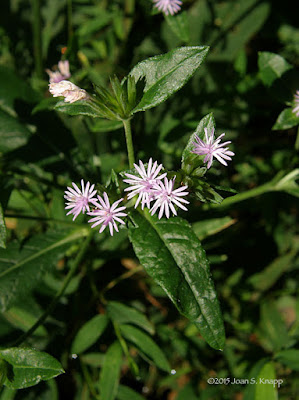 Carolina Elephantsfoot (Elephantopus carolinianus) still blooming. The flowers weren’t open when I walked by on the way into the woods. 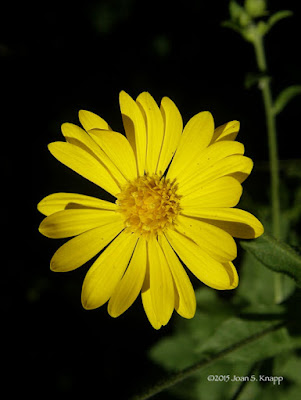 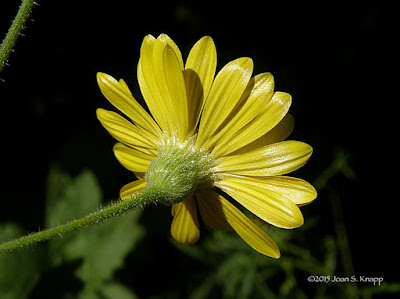 Camphorweed (Heterotheca subaxillaris) was in full bloom. The flowers of Camphorweed are very similar in appearance to those of Maryland Golden-aster (Chrysopsis mariana) that blooms around the same time. A quick look at the leaves allows identification of each. 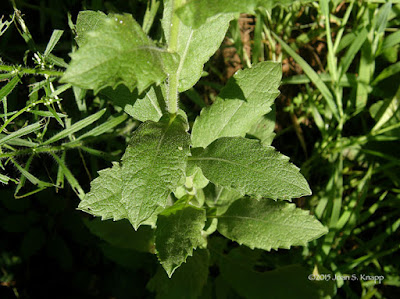 Camphorweed has broader, serrated leaves compared with the more narrow, smooth-margined leaves of the golden-aster. Camphorweed leaves are usually more twisted than these. The easiest way to differentiate Camphorweed is to touch the stem if you see ‘moist’ hairs on the stem or to crush a leaf; the oil or leaves will smell like camphor, hence their common name. 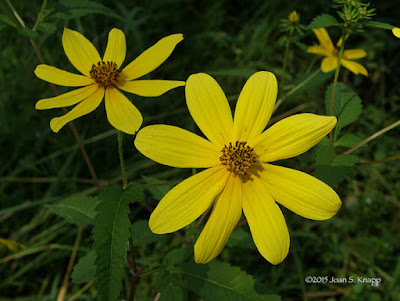 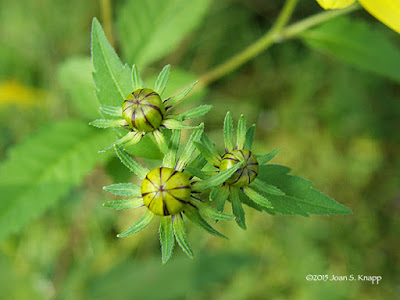 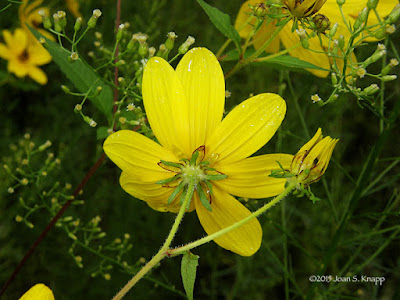 Back under the power lines, tall bushes were blooming with bright yellow flowers. These were Bearded Beggarticks/Ditch Daisies (Bidens aristosa), which put on quite a show en mass. 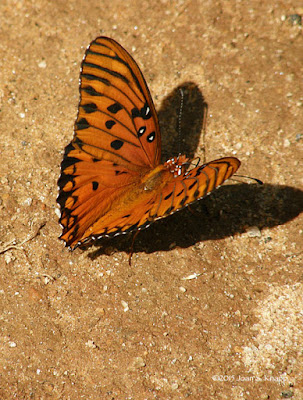 The final. colorful spotting on the trail was a Gulf Fritillary (Agraulis vanillae).