April 4th. I started to walk at Fort Yargo State Park in Winder, Georgia. One of my favorite walks is from the Group Shelter A to the Old Fort and back. This is a rewarding walk for viewing wildflowers. The route, which I described here. Things, in the way of Spring wildflowers, was starting to warm up on my most recent walk, documented here and here. 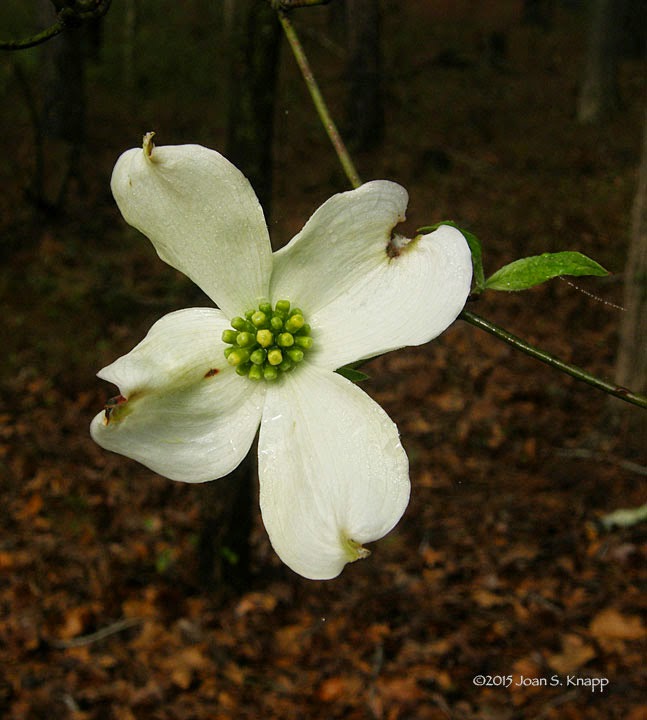 In the parking lot, a Flowering Dogwood (Cornus florida). Most trees were still just threatening to bloom in our area. This one had gotten with the program. There aren’t many Flowering Dogwoods in the park so this was a treat. 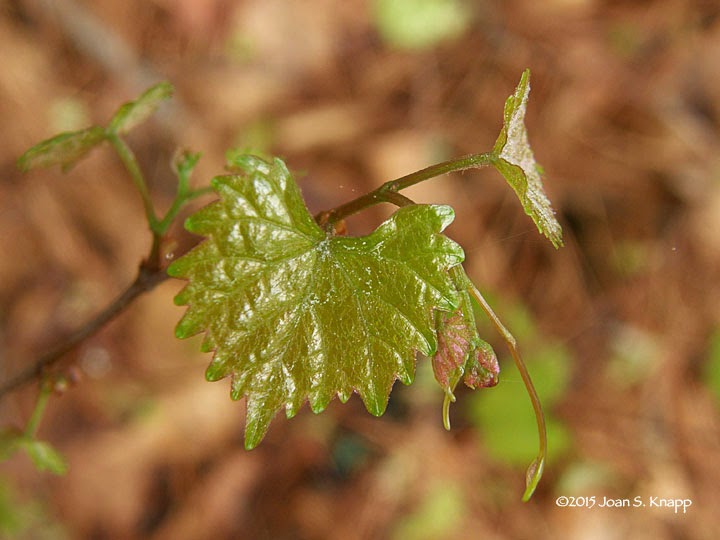 The Scuppernongs, a variety of the Muscadine (Vitis rotundifolia) grape, have been leafing out for the last week or so. The leaves of this one were particularly attractive. 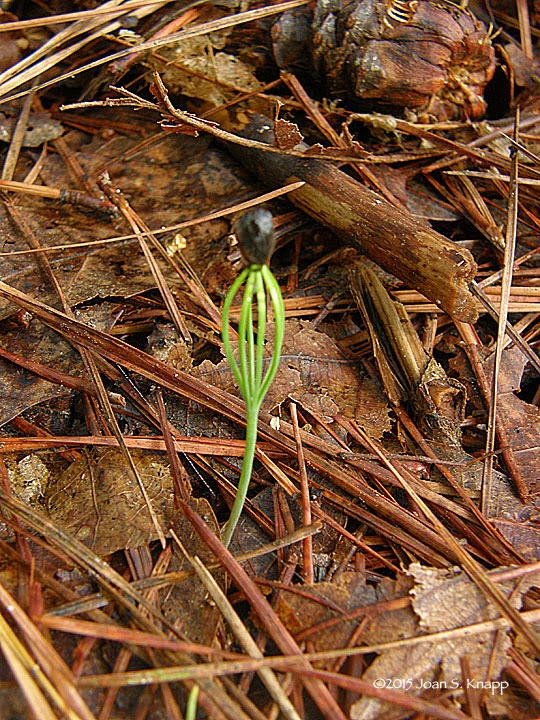 Lobolly Pine (Pinus taeda) seedlings are just emerging. This one still has its seed coat attached. 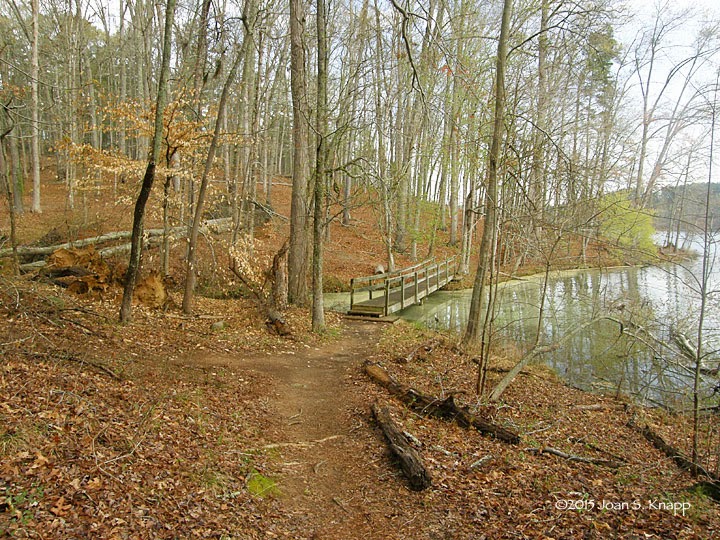 Approaching the first bridge. A green haze of emerging leaves on deciduous trees is replacing the American Beech (Fagus grandifolia) as the focus of attention. 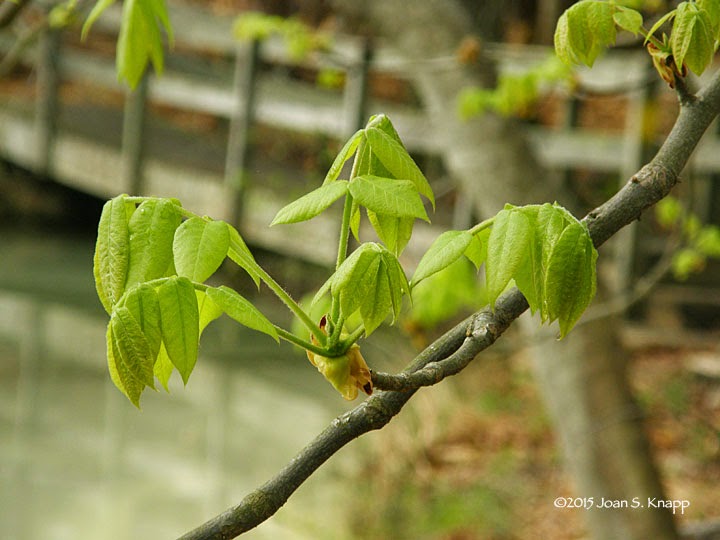 The leaves of the Black Walnut (Juglans nigra) are developing nicely. The multiple compound leaves are better defined now. 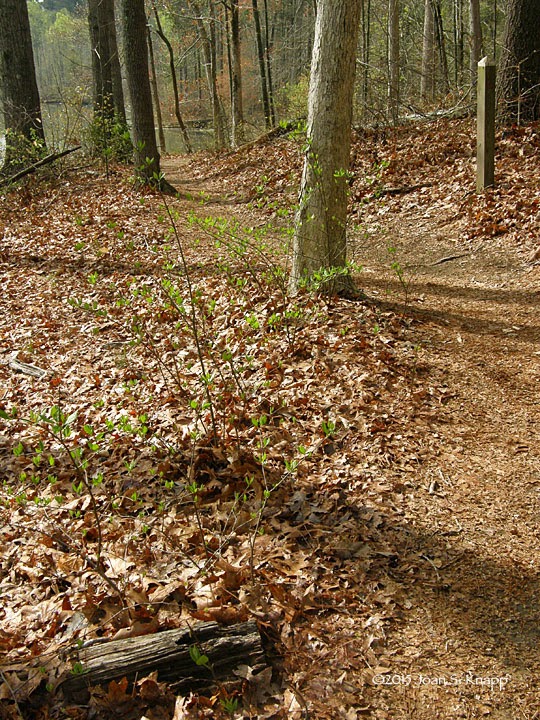 I kept an eye out for the Eastern Sweetshrub (Calycanthus floridus) that I had ‘stumbled on’ the previous week. This photo shows the shrub, and how easy it would be to overlook it, especially since it had fewer leaves last week. 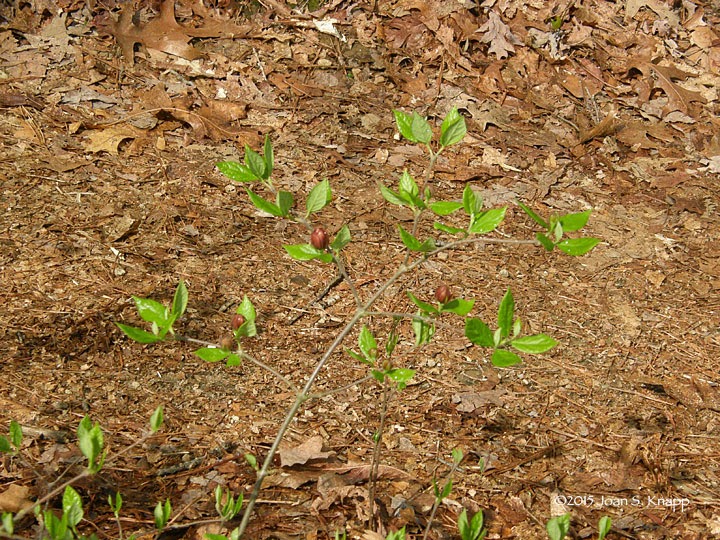 A closer view of a branch.


What surprised me was how fast the flowers developed. On March 26th, the buds were green, but this week they were already deep red and about to open. 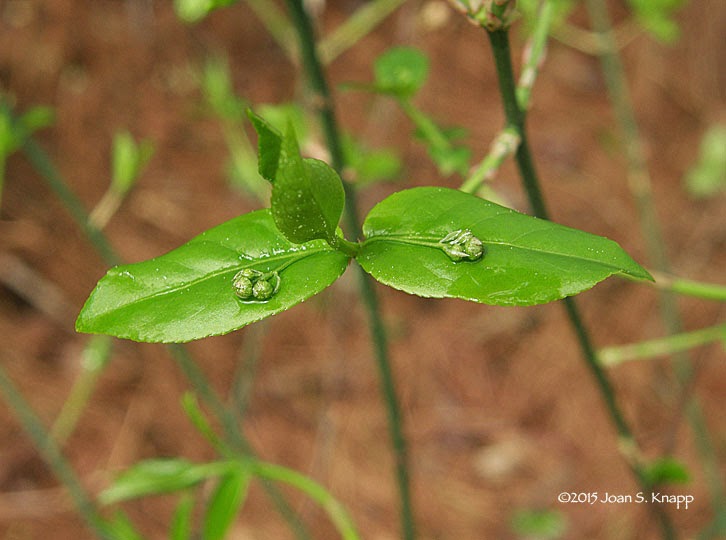 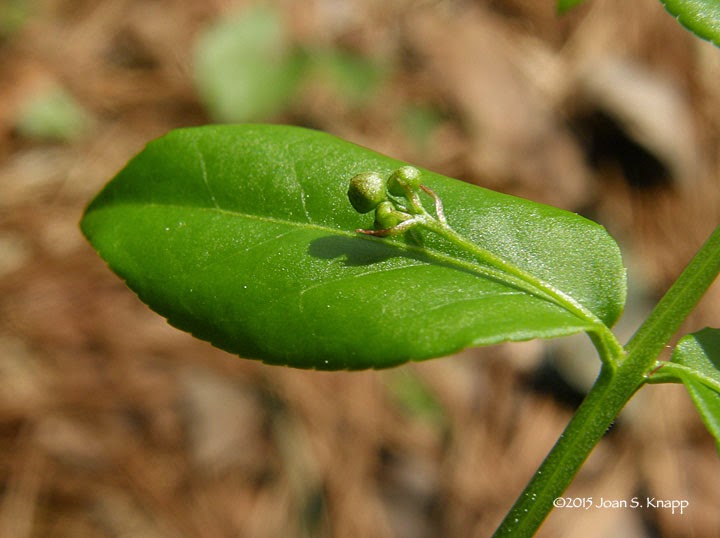 I checked on the Strawberry Bushes (Euonymus americanus) a little further along the trail. Their flower buds have developed further. Most have three buds on each stem. Ultimately, only one on each stem will develop to flowers; on rare occasions, two buds may bloom. 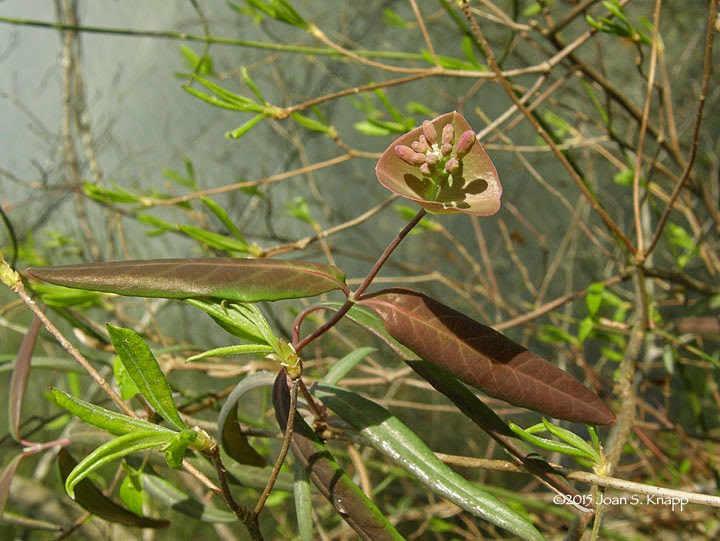 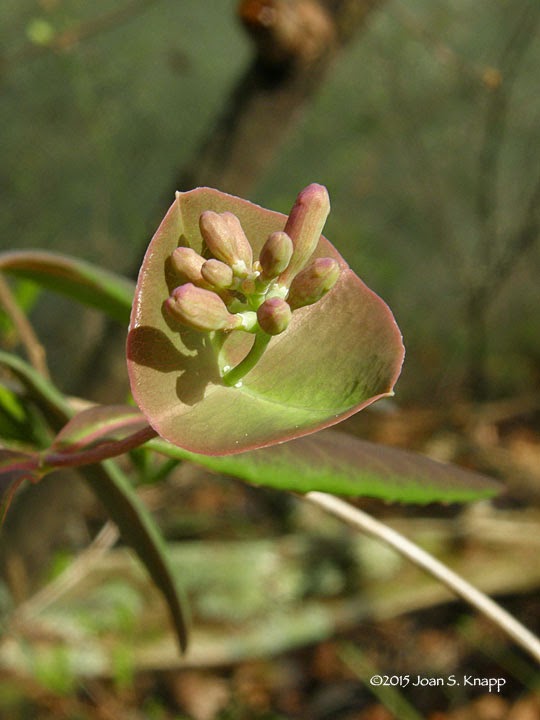 The Trumpet Honeysuckle (Lonicera sempervirens) flowers at the top of the cliff are still developing. These flowers have less-direct light exposure than the… 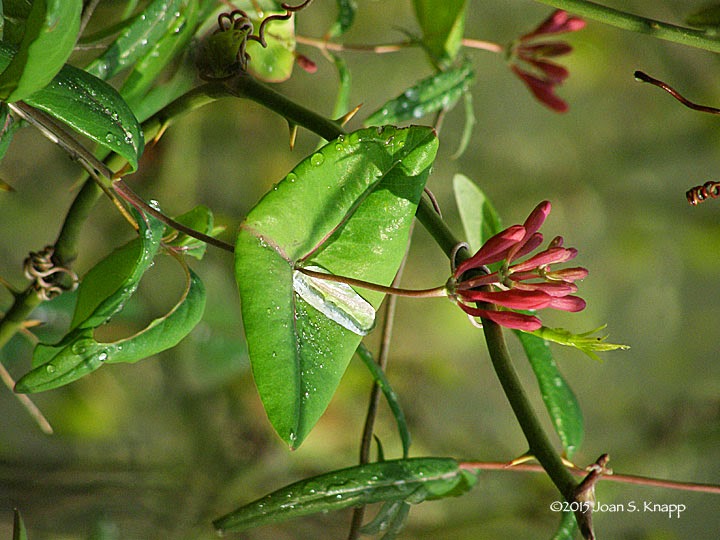 vines lower down the cliff face. The flowers on these vines are much more developed although not open yet. 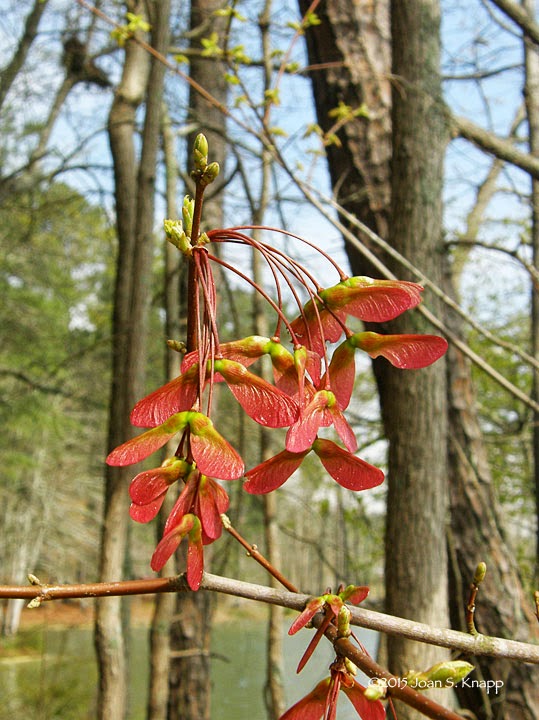 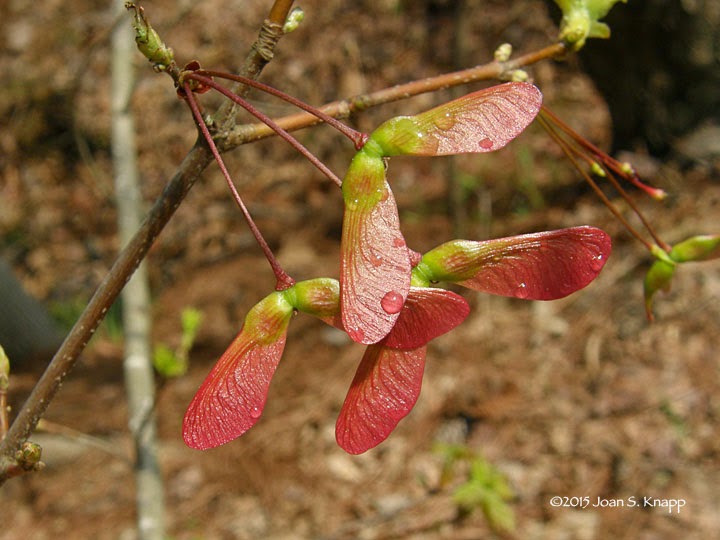 The Red Maple (Acer rubrum) seeds develop so quickly. It was only a couple of weeks ago that I saw flowers here. 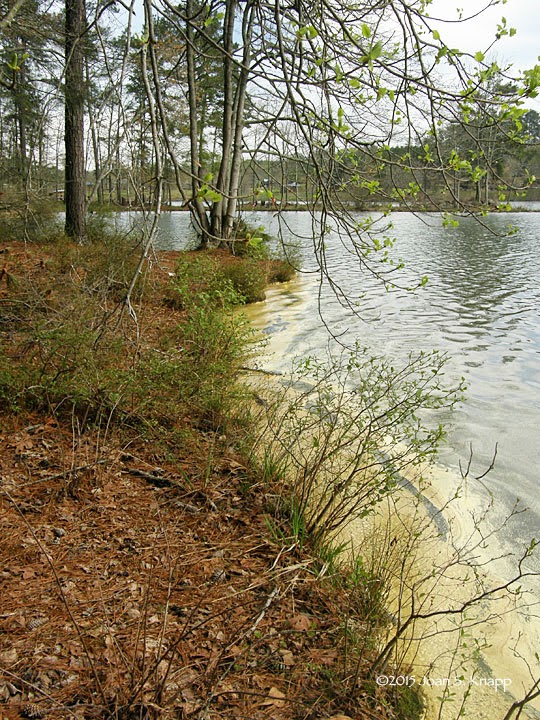 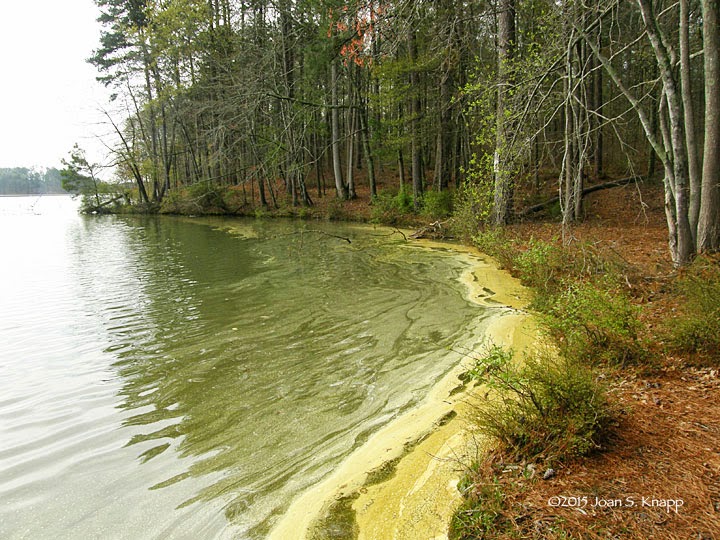 The pollen, mostly pine pollen, has been falling without mercy. The wind blows it across the surface of the water and it accumulates along the lake shore I certain areas. 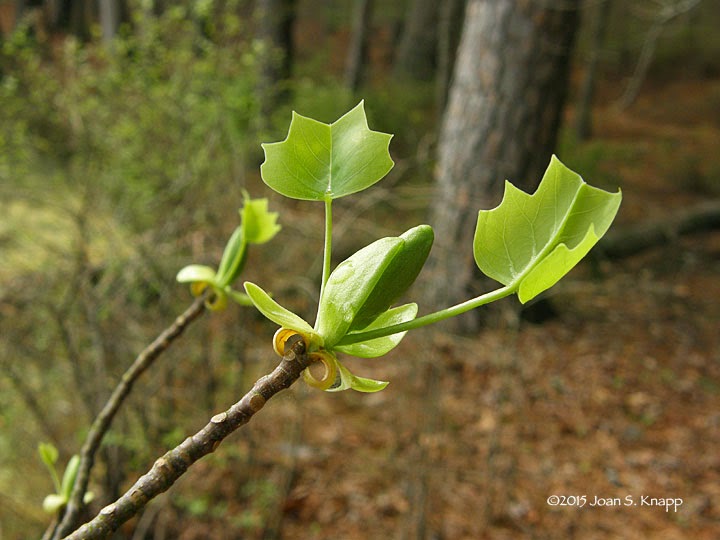 Leaves of the Tulip Poplar (Liriodendron tulipifera) are showing their distinct shape now. 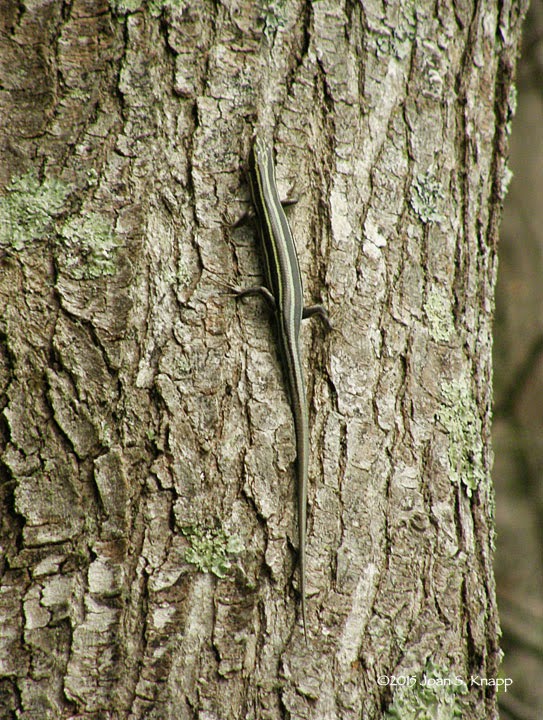 The first lizard I’ve spotted this year. A Five-lined Skink (Eumeces fasciatus) that was very shy and moved around the trunk away from me until it was high enough that it felt safe. 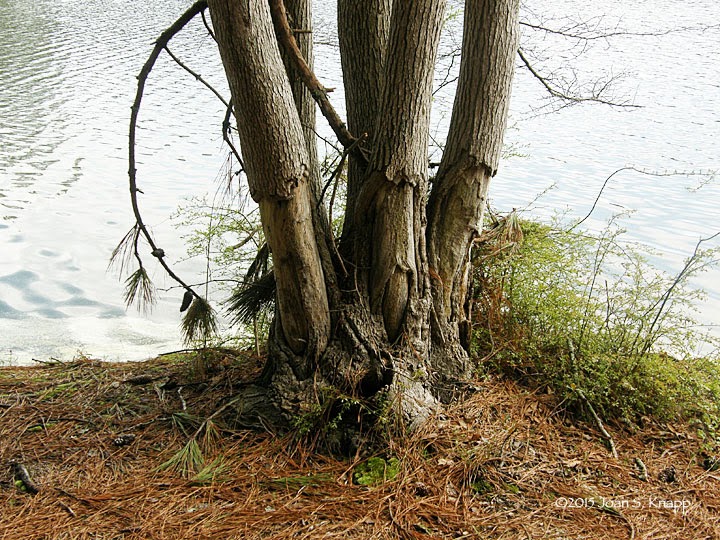 Before crossing the bridge to the fishing area, I stopped by this tree with several trunks. It’s a Black Gum (Nyssa sylvatica) that survived a fairly aggressive Beaver feeding ‘frenzy.’ Interestingly it survived and thrived to bloom and fruit. Maybe there’s hope for the large tree north of the fishing area.
To be continued…