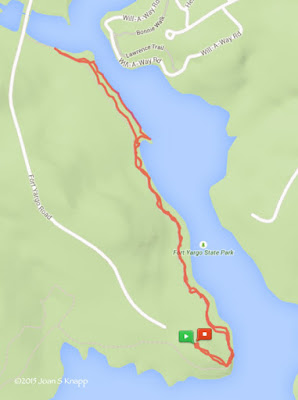 The route, which I described here, here, and here.
The early spring wildflowers have finished blooming; it’s time to watch the developing fruit. A few late spring/summer wildflowers are blooming now. 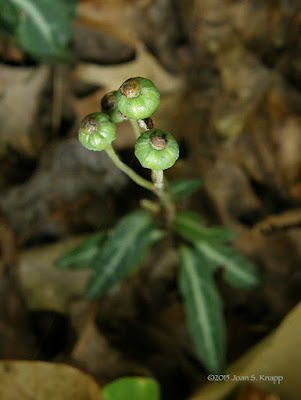 Just past the first bridge, the Pipsissewa (Chimaphila maculata) seed capsules looked healthy. These take a long time to ripen. 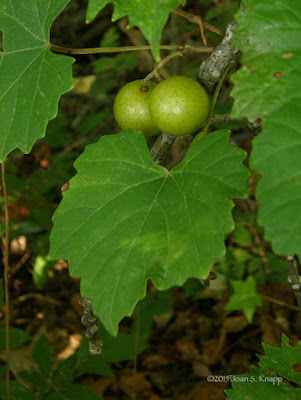 In the woods, I could see scuppernongs on the vines. 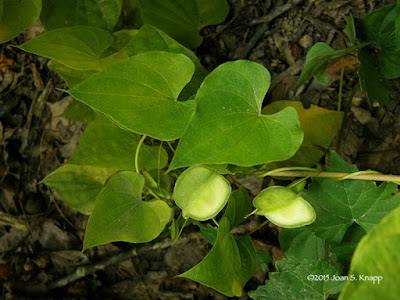 The seed capsules on the Wild Yam (Dioscorea villosa) vine were yellowing; maybe they were starting to ripen. 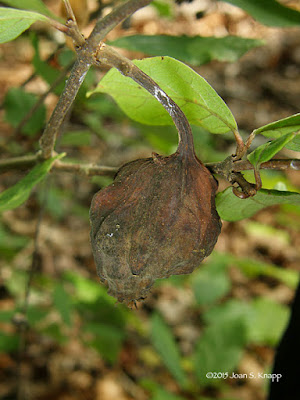 The fruit on the first Eastern Sweetshrub (Calycanthus floridus) was a darker brown than the previous week; it was starting to dry. 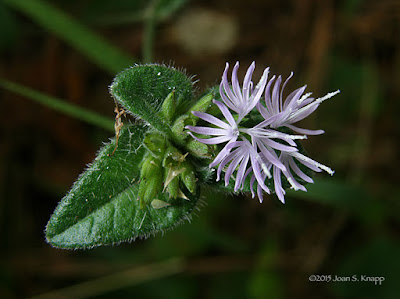 A Hairy Elephantfoot (Elephantopus tomentosus) was blooming beside the trail. The plants are sparser on this trail than on the trail from the Section B parking lot to the dam. 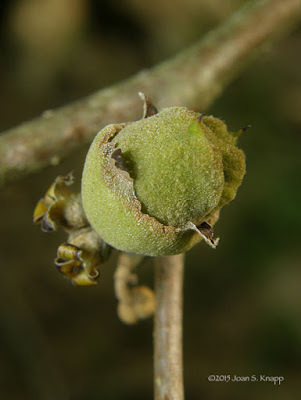 The seed capsules on the witchhazel bush (Hamamelis sp.) still showed no sign of ripening; the… 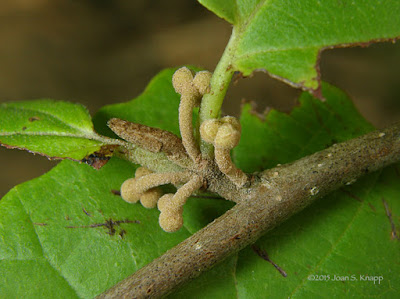 the flower buds developing for this season remained unchanged from the previous week. 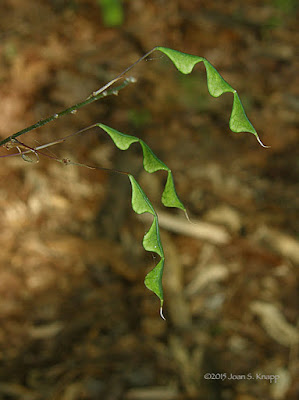 The lomonts on the Naked Ticktrefoil (Desmodium nudiflorum) were still developing; they were ‘sticky’ now – waiting for some unsuspecting animal or person to carry them away to a new location. 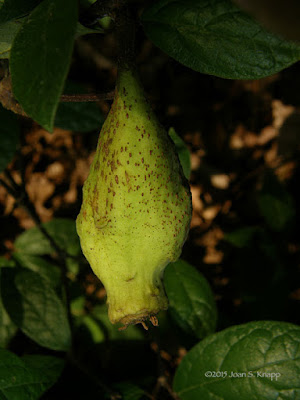 The fruit on the second Eastern Sweetshrub was still yellow; it was taking its time to ripen. 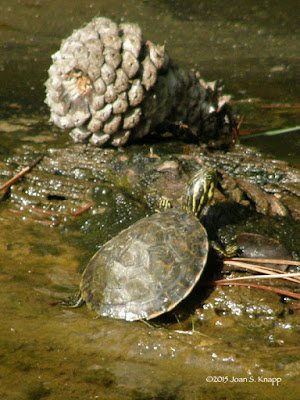 When I got to the bridge to the Fishing Area, I found another – or maybe it was the same as I saw the previous week – young Yellow-bellied Slider (Trachemys scripta scripta) sunning itself on a log in the inlet. 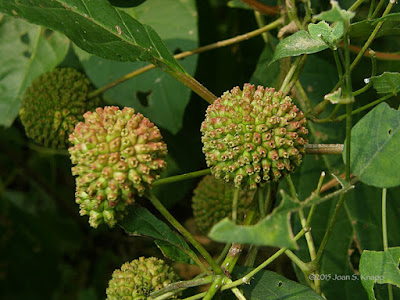 The fruit on the Buttonbush (Cephalanthus occidentalis) were unchanged from the previous week. 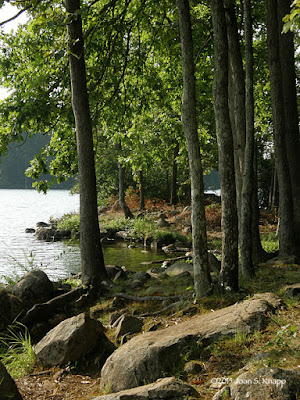 As I walked past the point in the Fishing Area, clouds had started to build up. 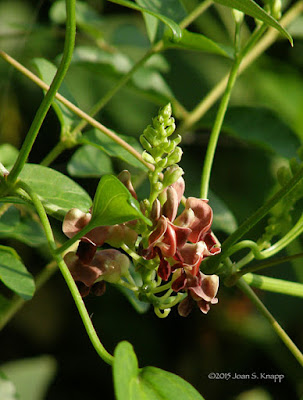 Groundnut (Apios americana) vines were still blooming along the shore of the lake. 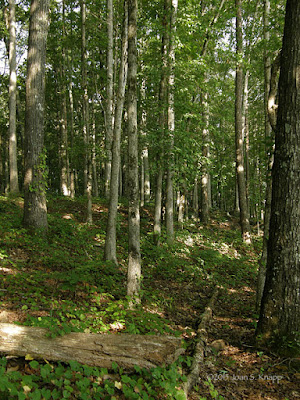 In the ‘Rock Garden’… 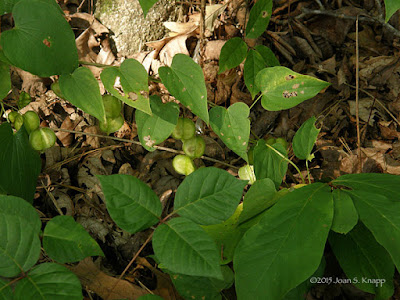 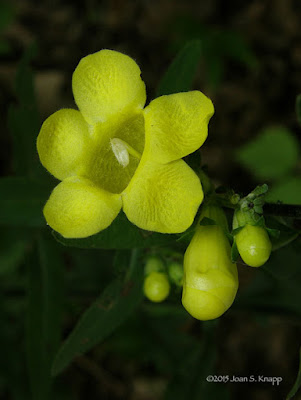 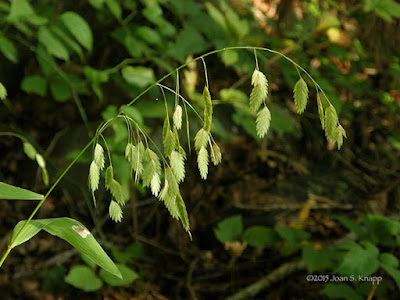 The Indian Woodoats (Chasmanthium latifolium) were already starting to ripen. 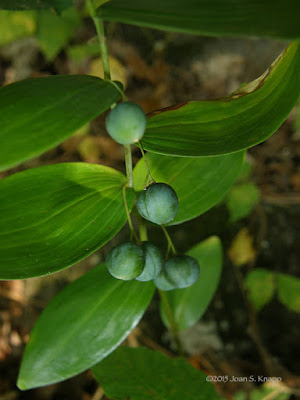 I found another Solomon’s Seal (Polygonatum biflorum) with berries that were just starting to ripen.

At the inlet below the Old Fort, the… 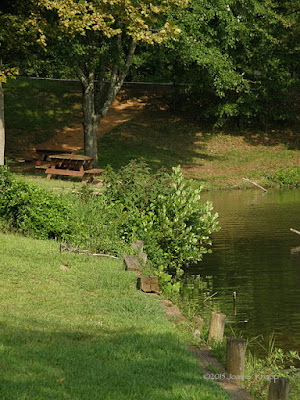 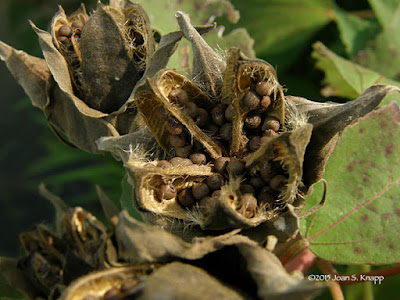 seed capsules on the Swamp Rosemallow (Hibiscus moscheutos) were opened to release their seeds. It was remarkable how many seeds were still in the capsules. 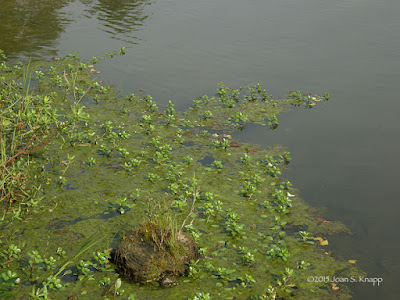 I’d been watching the Floating Primrose-willow (Ludwigia peplioides) that grows along the shore of this inlet in the lake. This patch used to be thick and bloom profusely; it’s much sparser now. 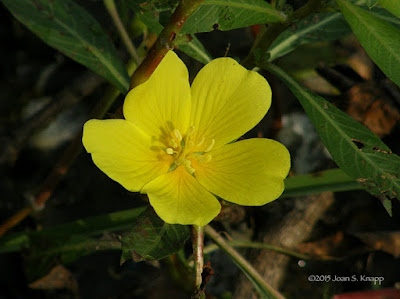 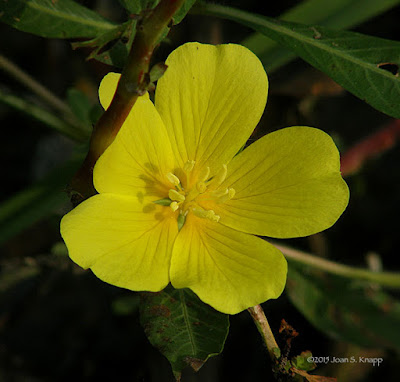 Finally, there was one flower and it was as beautiful as I remember. Sadly, it was the only flower this season. I’m glad I saw it. 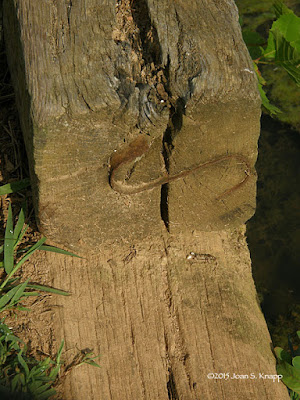 Before I set off back along the trail, I noticed an interesting feature on the wooden retaining wall along the edge of the lake. One of the large timbers had split and had been repaired with an iron wedge hammered into its end. I wondered if they still used this method for repairing timbers like this.